Off for my usual walk up the river Algarrobo this morning and ended with an unexpected double occurrence.  Still a little on the windy side but full sun and as I started up the riverside track I could not but notice the faint rainbow in the sky to my left despite it being almost cloudless.  No rain overnight or early morning and no sign of any dark clouds anywhere around, so why the rainbow?

Just for a change my first bird this morning was a male Blackbird before a couple of Collared Doves and a handful of Monk Parakeets.  Then it was out of the recreation area and the first of the small trees in the more open area held a male Black Redstart.  More Collared Doves but of the two birds atop the old bare tree the lower bird was a Wood Pigeon.  Also, whilst looking up, very many wandering Lesser Black-backed Gulls which continued to be present all morning so, presumably, taking shelter from the sea which had already encouraged the arrival of the early surfers.  Meanwhile, the wires to the left of the tree held a trio of Starlings, two Spotless and one Common.  Not so unusual at the time but more to follow as will be seen.

All then relatively quiet until I reached the sports hall with the road ford to my left when I came across the first White Wagtail of the morning.  The grassy bank on the far side of the river, which still had a steady stream of water flowing downstream, a trio of small horses were tethered to take advantage of the easy grazing and a solitary Cattle Egret simply standing to attention, neither feeding nor following the horses.  Indeed, the bird was still posed in the same position when I returned maybe forty minutes later.  The trees on my side of the river alongside the path as well as the later bushes close to the water held a number of feeding Chiffchaffs and then I was under the motorway and approaching the Experimental Station.

Just a pair of White Wagtails on the neighbouring grassed are but above the hidden reservoir scores of circling and departing gulls, this time mainly Black-headed rather than Lesser Black-backed but as I watched also a good number of Mediterranean Gulls.  Perhaps the weather is calming down at last the birds are making their way back to the sea for a little fishing.  In addition to the gulls, at least a score of Crag Martins feeding over the water.

Down to the ford before starting the return journey and nothing seen in the usually productive garden at the end. A Blackbird flew across the water from the far side and revealed more Chiffchaffs along with the only Hoopoe of the morning.  Next up was the first of two Stonechat to be seen and a passing Kestrel.  Back at the grassy field next to the entrance to the Experimental Station and a check of the trees at the back not only produced yet more Collared Doves but a further eight Starlings and this time it was to be five Common and just the three Spotless.  Could it be, with so few starlings on show that the wintering Common were going to outnumber the resident Spotless Starlings by 6 to 4 individuals?  Now that is going to be somewhat of a strange occurrence.

Back looking at the grassy edges to the river opposite the football field and the Cattle Egret was still at rest but also recorded were a handful of Meadow Pipit and, at last, the first House Sparrows of the day along with more Black Redstarts.  Lovely to suddenly record a male Blackcap and then on round to the sewage works where a further three Cattle Egrets were in residence. 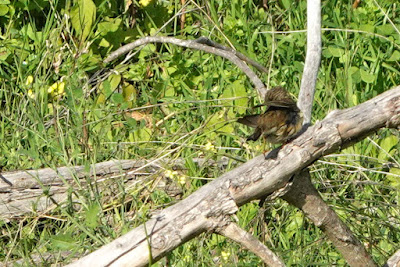 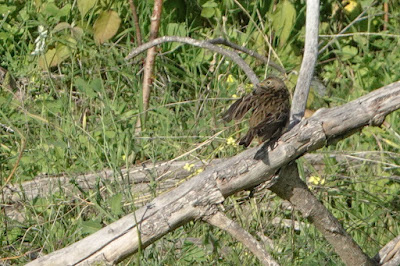 And so back the house with the final species being a half-dozen Goldfinch as I approached the now closed barbeque area.  But just as I was thinking that the underdog Common Starlings had won the battle, on the very last overhead wire of the walk eight more starlings and this time it was six Spotless to the two Common Starlings so letting the resident species creep home for the day’s win with a final 10-8 victory!

Posted by Bob Wright - The Axarquia Birder at 07:05