The start of a new birding year and most of the morning spent at the Charca de Suarez on the western outskirts of Motril.  Arriving via "Turtle Dove Alley" at 9 o'clock I met up with Mick Richarson and we headed off to the Laguna del Taraje to start a clockwise four of the reserve.  Collared Dove and Black Redstart as we entered the  reserve but found the first laguna very quiet with just a few Mallard before the appearance of both Common Coot and a Blackbird.  A brief appearance by both a pair of Teal and the rear end of a distant Purple Swamphen before making our way to the opposite end of the water, noting a Great Tit on the way, where we found our first Red-knobbed Coot and a couple of Gadwall.

The Laguna del Alamo Blanco was similarly quiet albeit it held a visiting, much-ringed, Spoonbill in addition to the resident White Stork.  Mainly Mallard, Moorhen and Teal although a Purple Swamphen did put in a brief appearance along with a passing Snipe.  A relatively short stay before continuing on our walk where we encountered both a single Robin and a small flock of Common Waxbill.  Mick also picked up both Wood Pigeon and a couple of Serin.

Far more birds on the Laguna de las Aneas, mainly Mallard, Shoveler and Coot with more of the Common than Red-knobbed species.  A single juvenile Flamingo rested on the edge of the nearby island and to the rear very many gulls;  lots of Lesser Black-backed and Black-headed but also a few Yellow-legged Gulls. No shortage of Little Grebe on the water and then the good number of Common Pochard along with a few more Gadwall to our right.  At least five Herons present and a dozen or more Cormorant.  In the nearby bushes much activity from the wintering Chiffchaff and a few House Sparrows along with the occasional White Wagtail.

Moving on to the Laguna del Trebol we had many more Red-knobbed Coot and at least four Fuerruginous Duck.  Near the hide a single Black Redstart was bust feeding with a visit from just the one Bluethroat and White Wagtail before the appearance of a Grey Wagtail.  Also visiting the area below the hide's window were both a Robin and Stonechat before watching the ever busy Cetti's Warbler.  Lots of Crag Martins feeding over the waters and even a quick fly-past by a lone Hoopoe.  Mick managed to locate the long-staying Moustached Warbler in the distant reeds and then a small flock of Mediterranean Gull passed over the water heading inland.

Back to both the main hide and Laguna del Taraje in the hope that might locate the Little Bittern and Wigeon seen the previous day but no such luck for us.  So, finally, to the Laguna del Lirio which, in the event, turned out very productive.  The expected Red-knobbed Coots and many Chiffchaff but also four Ferruginous Ducks. Were these additional ducks or had the previously seen birds relocated?  We managed to find a sleeping Snipe and, finally, the female Wigeon that had been reported from the reserve on the previous day.  Even the surprise House Martin that put in a brief appearance whilst at the Laguna del Trebol put in a longer appearance and gave good views.

Leaving the site we made our way back to Turtle Dove Alley where we found Cattle Egret, Spotless Starling and Crested Lark as we approached and once in the lane followed by a large flock of Common Waxbill and a couple of Red Avadavat.  Having noted more Chiffchaff, a slight detour through the pampas grass revealed a feeding female Penduine Tit and last, but not least, a Kestrel was hunting the adjacent fields as we reached the main road. 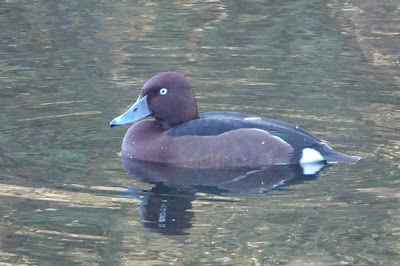 Taking the coast road back to Almuneca we stopped at the mirador overlooking the rocks below to look for a reported Purple Sandpiper but, again, no such luck.  We did, however, find a Turnstone and as we departed a juvenile Audouin's Gull flew over us.  And so back to Mezquitilla where we were naturally welcomed by the marauding Monk Parakeets.

Check out the accompanying website at http://www.birdingaxarquia.weebly.com for the latest sightings, photographs and additional information
Posted by Bob Wright - The Axarquia Birder at 06:13