A lovely day's birding in the countryside east of Huertor Tajor in Granada province with friend Mick Richardson.  rain overnight on the coast but 7C when I set off to Huertor Tajar using the motorway for the 80 minutes ride.  Well below freezing as I reached the top of the climb from Malaga and on towards Loja with lovely snowy mountain scenes to my right.  Arriving at our meting point the temperature, following overnight frost, was a miserly -1C!  Brhhh!  Then, without further ado, it was off to the upper Cacin valley area to explore the Moreleda Fields of Loja.  With Mick's car in for repairs and my scope still sitting inside the garage waiting to be put in the car this morning it was going to be a "bins only" day.

Crossing the river as we departed Huetor Tajar a quartet of Muscovey Duck were hanging out with the local feral geese and we soon added the first of very many Linnets for the day.  Collared Doves and Thekla Larks and arriving at the sandgrouse fields a drive through the olive  grove was unsuccessful in finding the local Black-bellied Sandgrouse but certainly no shortage of White Wagtails, Meadow Pipits, Chaffinches and more Linnets.  Whilst in the immediate area we continued to find more species including a distant Iberian Grey Shrike and good numbers of both Black Redstart and Corn Bunting.  The occasional Sardinian Warbler kept us busy before find our first Little Owl resting on the wall of the distant ruin.

As we left the site to drive down into the Cacin valley we encountered Greenfinch, Crested Lark and Stonechat plus a small number of Spotless Starling and, passing through El Turro, both Feral Pigeons and House Sparrows.  The stop in the trees half-way down to the reservoir was most productive in finding many smaller species.  First the Wood Pigeons followed by a calling Iberian Green Woodpecker and a couple of rows of Starlings, both Common and Spotless, on the wires across the neighbouring field before recording all the tit family of Blue, Great, Crested, Long-tailed and Coal Tit. Chiffchaffs were feeding nearby and a distant Wood Lark was heard then moved very close to us in the taller trees where we caught the most briefest of sightings. A Great Spotted Woodpecker was heard drumming away to the left of us then sighted as it flew away to the distant right.

A stop just before the bridge below the reservoir gave us the chance to walk back along the outflow channel where further Great and Blue Tits were seen along with both Robin and Blackbird.  A small charm of Goldfinch flew past and a male Marsh Harrier appeared over the top of the reservoir dam in front of us. Nearer to the bridge itself our first Blackcap of the morning.

Stopping to check out the reservoir itself it was obvious that the water level had risen considerably in the past week or so.  No Water Rail on this occasion but very many White Wagtails and three Marsh Harriers.  Just a couple of Moorhen abut at least a half-dozen Coot along with a few Cormorant and good numbers of Shoveler, Pochard and Teal.  Only a handful of Mallard recorded. Over the water very many feeding Crag Martin.

Then it was through the village of Cacin and up to the hills above passing Hoopoe and Buzzard on the way before a couple of Kestrel were observed.  passing through an olive grove a Song Thrush dashed way into the trees and when at the "Look out" no sign of any eagles but a distant flock of Jackdaw was noticed.

Having already seen a couple of Little Owls we slowed the car right down approaching a roadside hedge of small almond trees and, sure enough, we found another two resting Little Owls and at very close quarters.  Both birds remained in the their relative trees whilst the cameras got busy from inside the car. 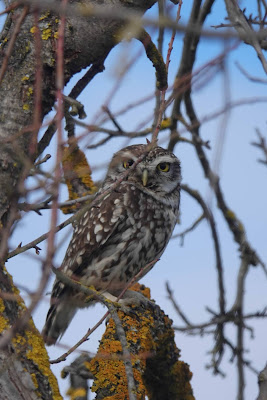 Making our way back through the almond trees towards Huetor Tajar we finally found not only many small flocks of Chaffinch and Goldfinch but, finally, a large number of Serin.  In addition, we were once more now back in fertile Iberian Magpie territory with many noted as we drove along the road.  A Grey Wagtail crossed the road and still the White Wagtails were all about.

No sooner had we made our way to our stop on the narrow lane opposite the presently favoured site of the wintering Little Bustards than we had a lone Heron along with at least fifteen Little Bustards in the long grass.  Very large numbers of Linnet, Goldfinch and Meadow Pipits feeding on the adjacent fields and, as we searched the area we witnessed a flock of approximately forty Golden Plover passing over to our front.  Three Cattle Egrets were found along with a few Tree Sparrows, Hoopoe, Chiffchaff, a single Bluethroat and a score or more Sky Larks.  All that was left now was to note the dozen or so Stone Curlew before dropping Mick back at his home then setting off myself for Mezquitilla. However, I did make a very brief stop at Ventas de Zafarraya to find a single Black Wheatear on the wires above the old railway track. 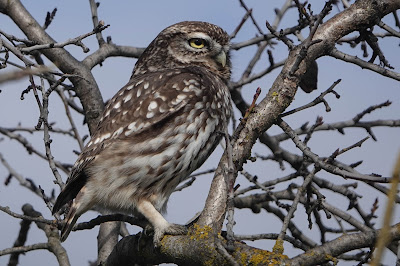 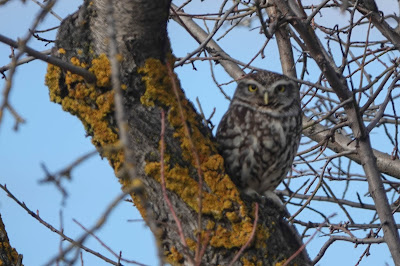 Posted by Bob Wright - The Axarquia Birder at 08:51