Arriving at the Desembocadura del Gualdalhorce, Malaga at 7.30 whilst still dark with friend Derek Etherton and soon joined by our mutual friend, Andy Paterson, we were in time to see a departing quartet of Night Heron heading up river away from the reserve along with almost seventy Glossy Ibis and numerous distant gulls. A Marsh Harrier was al drifting upriver at the back of the reserve. And as we crossed the footbridge there were numerous low-feeding Swifts, mainly Pallid but also a few Common and accompanied by the occasional Barn Swallow.

Then it was a slow walk, passing a few House Sparrows, up the main hide overlooking the Laguna Grande where we found scores of Little plus a handful of Cattle Egrets. A Blue-headed Iberian Yellow Wagtail was feeding near the water's edge as we approached the main hide.  On the laguna itself lots of Coots and a few Mallard and Moorhen plus the odd Little Grebe before trying to count the numerous Black-winged Stilt.  A couple of Cormorant on the bare observation tree and also a half-dozen Heron.  Larger birds included a handful of Flamingo and a single Spoonbill not the mention the score of roosting Black-headed along with fewer Yellow-legged Gulls.  As the Black-headed took flight we also identified a trio of Mediterranean Gulls.

A single female Shoveler paddled across the mid-water and it was time to start concentrating on the many small waders.  To the extreme left and right-hand side of the water a Greenshank and on the spit in front of us a Redshank, Ruff, couple of Dunlin and many Ringed and Kentish Plovers. A lone Snipe was found "hiding" amongst the twigs of a fallen bush on the right of the small island at the end of the spit.

Off to the Laguna Escondida where we found more Coot and Little Grebe plus a trio of Kingfishers.  At the back of the water the occasional Moorhen then a single male Pochard and a female White-headed Duck. A lone Slender-billed Gull flew past the front of the hide and at the very back of he water the ghost-like appearance of a Squacco Heron as if flew across an exposed area of water before coming to rest just behind some cover but the very occasional slight movement enabled a couple of record shots to be taken of its upper body giving Derek the thought that it might well be a juvenile Night Heron.  However, having seen the exposed "white bird" I still feel it was a Squacco Heron rather than a potential Night Heron.

Moving on over to the eastern canal and the Laguna Casilla we had a handful of passing Goldfinch plus more Blackbirds and a pair of Greenfinch were calling in the trees behind us. Also recorded were yet more Collared Doves and a single Spotted Flycatcher.  More Coots, Moorhen and a few Mallard on the water along with six Flamingo. A Common Sandpiper landed on the far bank long enough for a quick preen before departing and all the while the constant, harsh calling of a Jay, eventually three seen, from the trees behind us.  Just as we were about to depart a Little Tern arrived on the scene and must have have made went of more dives into the water for an earl fishy lunch.

Moving on to the Wader Hide we encountered a good number of Black-winged Stilts plus another Greenshank and the Little Tern had also arrived to take a rest on the sandy island near the centre of the laguna.  The bare trees at the back of the water held both a Kestrel and a small number of Spotless Starlings. At this point a second Marsh Harrier was seen and then, along with a few Ringed and Kentish Plover a single Curlew Sandpiper arrived on the scene.

Moving down to the Rio Viejo (Old River) a Hoopoe flew across the track and a couple of Blackcap were found in a neighbouring bush along with more Sardinian Warblers.  Very little on the water apart from the occasional few Black-winged Stilts and five Heron at the back of the inlet but then, on the near side a trio of Sanderling.  The final bird of the morning before making our way back to the car was an adult Woodchat Shrike striking a familiar pose atop a fallen, bare bush. 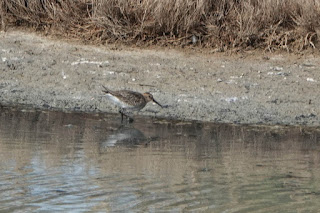 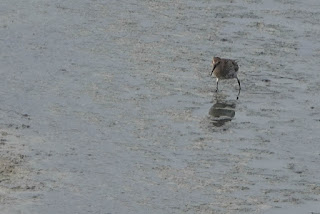 Posted by Bob Wright - The Axarquia Birder at 02:33