Local birding this morning saw me at the nearby Barbate Marshes by 9 and few hours later on to La Janda to take a second, shorter, visit to the western end.  Stopping at the beach entrance just over the long bridge I managed to record both Lesser Black-backed and Yellow-legged Gulls in addition to the local House Sparrows.  Both in front of me and moreso across the road looking at the river itself a Whimbrel, Ringed Plovers and a dozen Turnstone.  Also present a Common Sandpiper and at the back a solitary Little Egret.

Moving round the back to take a look at the marshes themselves I passed by the cattle pends and in addition to both Cattle Egrets and many Feral Pigeons a couple of Bald Ibis.  House Sparrows and Goldfinches were drinking and bathing in a puddle on the track and on the wires above a handful of Spotless Starlings along with Collared Doves.

Making my way to the main area so that I take a scoped look over the waters I started with a couple of Crested Larks and then the many distant Flamingos.  Nearer to hand the waders included both Ringed Plover and a couple of Dunlin whilst further away a number of Black-winged Stilts and numerous Avocet.  In addition to at least six Heron there was a score of Mallard on the main water.

Stonechats on the fences and trees around me and in the far distance a pair of Shelduck. Just a single Black-tailed Godwit and having been distracted by the overhead Pallid Swifts I resumed my detailed scope of the two nearby islands and eventually found a single Stone Curlew but no Collared Pratincoles on this occasion.

Moving on round the track towards the far end I came across a trio of Tawny Pipits and the only car seen all morning chose that exact moment to drive up behind me and give a blast on its horn! So much for trying to get a close photograph.

A little beyond I ventured to the water's edge to take a closer look at the very many roosting Audouin's Gulls and discovered a single feeding Spoonbill below me.  A second Spoonbill was found almost at the far end, where I recorded my only Black-headed Gull of the morning, and on this occasion the bird was in the company pf a dozen Grey Plover. 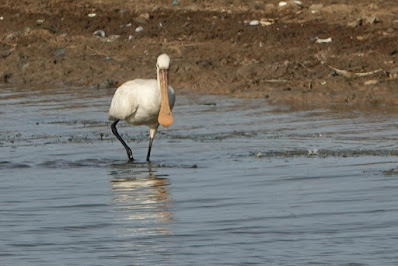 Making my way back to the start of the waters I stopped, with now many Barn Swallows feeding over the water, to admire the distant Osprey.  Then, driving past the cattle pens to see if the Bald Ibis were still about, they were not, the luxury of a very patient and posing female Whinchat on the fence right next to me.  Almost too close to focus the camera so fingers crossed at least one shot to illustrate the sighting.  The drive over to La Janda was hardly worth the effort in terms of numbers but, then again, what was missing in numbers was more than compensated by quality with a fabulous range of raptors.   early on a couple of Common Kestrel following both the House Sparrows and Barn Swallows and then a large charm of Goldfinches.

However, once over the bridge towards the "smelly farm" first a Marsh Harrier (and a second later on) followed immediately by no less than a Spanish Imperial Eagle.  More Common and yet again a single Lesser Kestrel before, high above me, a Booted Eagle. 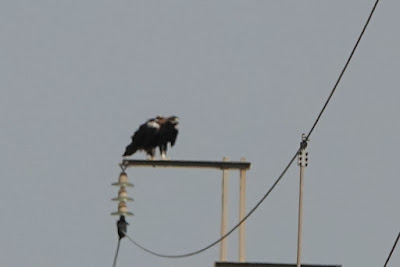 The smelly farm held its usual contingent of both Jackdaws and Feral Pigeons but nothing else until down to the far rice fields.  Here I picked up a couple of Crested Lark and a single Little Egret.  Taking the track through the rice fields no less than three Green Sandpipers took flight. Approaching the end of the road and the exit from La Janda I finally found my first Stonechat on site and at the very last few yards a Hoopoe flew across the road in front to me.  Just the fifteen species here but what species!  Then it was back to Barbate for a rest and something to eat and drink whilst I contemplate an evening return to the Barbate Marshes. 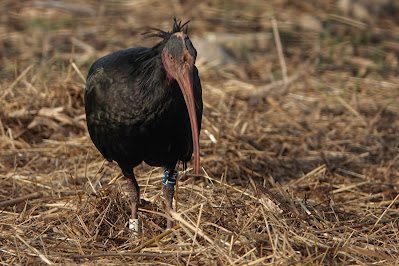 For the latest news follow the Axarquia Birds and Wildlife Facebook page for more photos and comments and the opportunity to share with the wider birding world.
Posted by Bob Wright - The Axarquia Birder at 09:23