Our last day in the UK before returning to Spain and with so many reports coming in about the Mandarin Ducks at Eyeworth Pond I just felt I had to make an early morning visit to the New Forest, especially as the site is less than forty minutes away.  Arriving on scene with the children now back at school and hoping for a site devoid of all others, I was somewhat disappointed to not only find a dog-walker but the beast off-lead and running around.  However, by the time I was set up in the car park to walk all of five metres to the water's edge the dog was under control and within five minute dog and owner had departed to an alternative car park,  Great!

Once at the water's edge it was obvious that the two score of Mallard at the water's edge were used to receiving their daily bread, so to speak, and a little further away I could see a lone male Goosander.  Whilst a couple of Wood Pigeons wandered about soon to be joined by both a Magpie and a passing Jay I watched a couple of Moorhens heading for the tall grasses.  But where were the Mandarin Ducks?  A walk to the far end and look back through the bins soon found a drake and right opposite where I had been standing.  So back to the original position and found not one but a total of five individuals, three males and a couple of females.

Meanwhile, a couple of Robins were bobbing about between shore and neighbouring bushes which drew my attention to the number of garden birds in the same area.  Later I discovered a couple of feeders albeit both were empty having presumably been stocked for the week-end.  At one point no less than five Dunnocks feeding on the gravel and later joined by a couple of House Sparrows whilst to my immediate right there was a constant movement of Blue Tits.

Having got used to the Blue Tits it  was a lovely surprise to see the visit of a single Marsh Tit before both Great Tits and Chaffinches put in an appearance.  Time to take a little walk along the wide path into the woods as I waited in the hope that the Mandarin Ducks might venture further from their resting place under a large bush. The walk revealed not just the local Blackbirds but a passing flock of about a score of Redwing.  Further on, after the Redwings had moved off, I found a single Song Thrush.  As I returned to the pond a couple of Carrion Crows had appeared but the Goosander had disappeared into a reedy section of the pond which did not lend itself to a photograph and all five of the Mandarin Ducks seemed more than happy to reman in their sheltered spot.  Time to move on if I was to be home before midday and as I left the pond area first a couple of Starlings and then a Mistle Thrush flew across the road.

Being well ahead of time, a very short deviation allowed me to travel back via Romsey so that I could stop in the main road as it ran along the broad edge of Fishlake Meadows.  The water looked white there were so many roosting Black-headed Gulls but a little searching soon found a handful of Herring Gulls.  Lots of Coots at the front of the water and a number of Cormorants roosting in the trees at the back.  On the water between the flooded trees and the back mainly Wigeon and Mallard but also a pair of Shoveler, a handful of Gadwall and about a dozen Tufted Duck.  The Pochards seen when I first arrived seemed to have moved behind the reeds but the I found the huge flock of Teal.  What put up most of the ducks?  Certainly not the few Greylag Geese but not long in finding the culprit as a Marsh Harrier eased its way to the left.  Just the two Mute Swans and also a couple of Wood Pigeon and a solitary Robin to make up the total of sixteen species at this site. And after fifteen minutes checking the water and surrounds, still home by 11.35 to make a start on packing the car and sorting out the Spanish health form in readiness for tomorrow's departure. 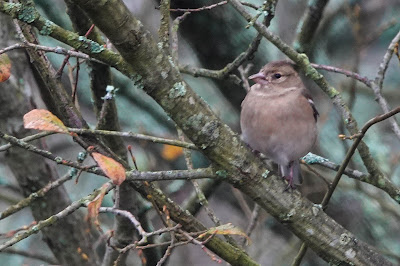 Check out the accompanying website at http://www.birdingaxarquia.weebly.com for the latest sightings, photographs and additional information
Posted by Bob Wright - The Axarquia Birder at 12:48