First day back home and needing to visit the superstore in nearby Motril I followed up by a quick drive round the corner to present myself for the evening opening at the Charca de Suarez.  But first a quick return drive down the Camino Patria at the back of the reserve.  Lots of birds about including over 40 Cattle Egrets, a pair of Kestrel and very many White Wagtails.  Also noted were a couple of Collared and a handful of Rock Doves plus a small flock of Common Waxbill and a pair of Greenfinch. Making my way back to the reserve I watched a passing Marsh Harrier and also added a charm of Goldfinch.

Those of us waiting for the gates to be unlocked were watching the Kestrel resting atop a pine tree just inside the reserve and then I was off to the LagunaTaraje where I found Mallard, Shoveler and Teal along with a few Common Coot, a single Purple Swamphen and a Little Grebe.  Just the one Moorhen but plenty of foraging Chiffchaff.  The hide at the far end produced more Shoveler and a pair of Collared Doves.

Next of to the Laguna de las Aneas after a short walk towards the far entrance which produced a male Sardinian Warbler.  Lots of Common and Red-knobbed Coot along with very many Black-headed and a few Herring Gulls.  No shortage of Cormorant on view and in addition to the lone Little Egret there were a dozen Heron.  Ducks were mainly Mallard and Pochard with a few Teal and Shoveler.  Lots of feeding Crag Martins over the water, a few more Little Grebe and the occasional White Wagtail plus ever-present Chiffchaff. 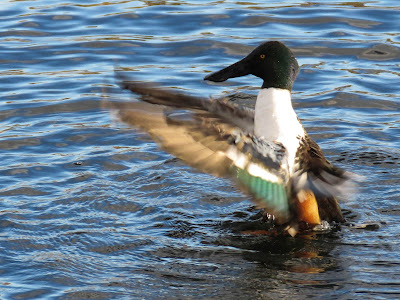 Making my way towards the Laguna del Trebol I found a couple of Blue Tit and once inside the hide close views of many Red-knobbed Coot and Chiffchaff along with the feeding Crag Martins.

Eventually I found the hiding Ferruginous Duck and no sooner found than a second appeared.  By way of change a couple of Gadwall hove into sight.  It was whilst at the opposite end of the water and safely into the hide that I found both foraging Cetti’s Warbler and Bluethroat who seemed to take no notice at all of the many Chiffchaff.  Then it was back to the exit encountering both a couple of Great Tit, a Robin and a quintet of Blackbirds.  Just the bare two hours in total and a grand 37 species to welcome me back to local Spanish birding.  The final observation was the murmuration of over 300 Spotless Starlings as I left the reserve to regain the main road back to the N340   Who knows, maybe there was the odd score or two of Common Starlings joining in the display with their southern cousins. 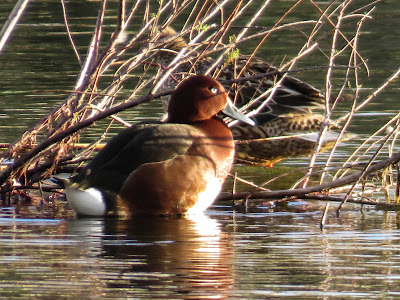 Posted by Bob Wright - The Axarquia Birder at 02:44