A beautiful calm and sunny start to the day with clear blue skies.  However, very cold with the temperature still at 4C approaching 10 o'clock starting my morning's birding at RSPB Frampton Marsh. Approaching the reserve I had already recorded Carrion Crow, with more to follow once on site, Wood Pigeon and Rook.  Next up both Collared Dove and Blackbird plus a lone Pied Wagtail.  But once parked up at the end of the lane near the Wash embankment nothing but Wigeons here, there and everywhere; there were thousands. Yes, many Teal but only a dozen or so Shoveler and even fewer Mallard.  And that was it as far a duck species went.

What a honking noise as I looked up and watched at least two hundred Pink-footed Geese pass over.  Probably more than twice that number on the reserve with a good number of resident Greylag and Canada Geese plus three figures worth of Brent Geese. It very much then became a challenge to find something different, especially of you discount the very large number of wintering Lapwing.

A lone Heron was found on the far side and climbing up to the top of the high bank a quartet of Meadow Pipit passed over,  Below on the scrapes I managed to find a couple of Redshank and out on the marsh itself a distant Short-eared Owl that was mobbed by a gull.  Making my way back tot he main car park I noted Little Egret, a couple of Pheasant way out on the left and, nearer to the Visitors Centre a handful of House Sparrow.

Next came a walk to the Reed Hide and stooping on the way I managed Moorhen, a Snipe and three Dunlin.  Having scoped past all the Wigeon and many Teal I then found a pair of Avocet.  Once in the hide a Little Grebe towards the far island and a single Black-tailed Godwit.  However, the best sighting of all was the Water Rail that casually made its way along the shore immediately in front of the hide and not ten metres away from those of us inside. 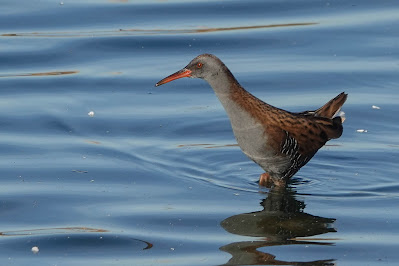 All appearing very quiet so I decided to cut short my visit and make a stop at the Deeping Lakes Nature Reserve rather than Baston Gravel Pits on my way back to Stamford.  But as I left the reserve both Goldfinch and Great Tit in the trees near the exit and then a Starling followed by a few Black-headed Gulls.

Thirty minutes later as I entered the Deeping Lakes reserve to the south-east of Deeping St James a couple of Red Kites quartering a recently ploughed field close to the ground and then a stop to check the first pool revealed a few Mute Swans plus a large flock of Black-headed and a few Herring Gulls.  Jackdaws were resting on one island and the one to the right held a pair of Egyptian Geese.  All around a number of Wigeon and Teal plus a handful of Shoveler and a pair of Mallard.  At the back a few Canada Geese but to the right a male Pintail.

A walk up the bank to look at the River Welland produced more Mute Swans plus a quartet of Little Grebe and a a couple of Mallard. Back inside the reserve and on the hide overlooking the main water produced Blackbird, Great and Blue Tit plus both Carrion Crow and Wood Pigeon.

A large selection of species observed from the hide including Cormorant, Great Crested Grebe, Heron and Little Egret.  Ducks included Wigeon, Teal, Shoveler, Mallard, Pochard, Tufted Duck and Gadwall. In addition, there were scores of Coot and I also found both Moorhen and a few Greylag Geese.

Completing the circular walk to the far end, through the woods and back along the river bank I found a Great Spotted Woodpecker and a couple of Starlings feeding on ripe berries.  (I was also informed that there is presently a large murmuration of Starlings in the area totalling ,many thousand.)

In the next field a couple of Magpie and as I made my way back to the car park a dozen or so swans flew over the river and appeared to land on the entry pool.  Reaching the exit, I stopped to double-checked having noted the additional Mute Swans present and, sure enough, they included three Whooper Swans amongst their number.  Was I or was I not very pleased!  All that now remained was to note the Kestrel sitting on the wire just round the corner with a trio of Collared Doves on the pylon and no less than five Pheasants in the field opposite.  Two visits and both returned a total of 34 species with a species return of 50 for the day. 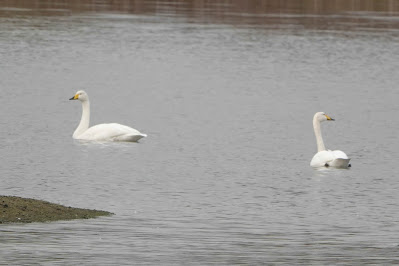 Check out the accompanying website at http://www.birdingaxarquia.weebly.com for the latest sightings, photographs and additional information
Posted by Bob Wright - The Axarquia Birder at 11:24