Lovey to read about the good day's birding undertaken by Dave and his Arboleas Birding Group.  It had been my intention to join the group until I realised that the previous evening was the annual community meeting so no time to book an overnight in the area.    Reading the report I, too, would like to add my best wishes to John (who I had the pleasure of meeting on a couple of occasions) and Marion upon their relocation back in Britain and trust the move goes well and no Covid paperwork problems!  Jenny and I will also be making the same change of plans come the end of the year, albeit we will retain our base in Velez de Benaudalla (Granada province) to use for birding visits once settled in at Warsash at the mouth of the Hamble River overlooking its confluence with Southampton Water.

It would appear that Black-winged Stilts are being found everywhere and also single, or few, sightings of Glossy Ibis.  yet again I seem to have missed out on a Little Bittern but I'll get their in the end!  It may be my imagination but you're now very lucky to see one of the handfulof White-headed Ducks at the Guadalhorce in Malaga but their still seem to be plenty around.  Indeed, up at Daimiel last week they could be counted in scores, well out-numbering all the other ducks present even if you doubled the latter.

Rambla de Almanzora & Vera Playa: Wednesday 26th May
Going local this week. I picked Juda up from the Ballabona service station on the A7/E15 and headed via Cuevas de Almanzora to the rambla.  On the roadside power line near the Desert Springs golf complex we saw a Roller.  A Stone Curlew flew across the road in front of us.  We joined the rambla and stopped at the first weir pool.  Only Mallard and Moorhen in the water, but plenty of House Martins flying above it.  A Red-rumped Swallow  made an appearance.  Driving further along, Juda spotted a single Glossy Ibis, presumably the same one we saw three weeks ago in the same place.  There we added Little Egret and Black-winged Stilt.  Also seen were Hoopoe, Spotless Starling, House Sparrow and Barn Swallow. The only birds at the ford were Black-winged Stilts.
We parked up on the embankment next to Peter and Adrian.  We were joined by Michael, Karen, Kevin, John, Trevor and Neville.  Having seen Collared Dove, Woodpigeon and Common Swift we began to walk towards the sewage works.  John spotted a Serin.  At the sewage we saw a Little Ringed Plover.  Trevor was first to see a Black-headed Gull.  On the big pool we found some Common Pochard.  Around the peripherals were Mallard and Black-winged Stilts.  John added Greenfinch whilst Peter and Adrian saw a Grey Wagtail.  A Hoopoe flew over. It was part albino.  Both outer halves of the wings were pure white!  We could hear Reed Warblers.  We added White Wagtail, Blackbird and Thekla Lark.
We adjourned for coffee in Villaricos village.  We were joined by David and Myrtle who came down especially to say their goodbyes and best wishes to John, my second in command, who's going back to the UK with his wife Marion.  As a group we all wished them both all the best.
We made our way down to the beach.  With the breakers coming in with force, unsurprisingly there was no birdlife on the harbour rocks.  Trevor did find a resting Cormorant drying its wings on the beach.  Nearby was a Kentish Plover.
We walked over the flat "field" and up the embankment to view the estuary.  Numerous Coot were in evidence.  John found some Audouin's and Yellow-legged Gulls.  Sitting next to them was a Sandwich Tern and a Little Tern.  Close by was the resident Whimbrel.  Also seen were a Grey Heron and a Ringed Plover.  We walked back via the beach and saw nothing new.
We made our way to the dual carriageway at the back of Vera Playa, which overlooks a shallow wetland.  Apart from previously seen Mallard, Common Pochard, Coot and Black-winged Stilts, Kevin spotted a Little Grebe and then a Black-necked Grebe.  There were a few Greater Flamingos.  I spotted some White-headed Ducks.  John then found a fast low flying Little Bittern above the far reeds.  Moving beyond the hump, he found a perched Whiskered Tern, behind which were some Cattle Egret. 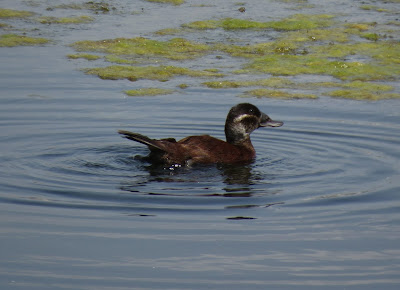 Michael and Karen departed as we moved on.  Kevin and John stopped at the first elevated viewing platform whilst the rest of us made for the second one.  Both parties added Red-crested Pochard, females and ducklings for us and males for them.  We had close up views of a pair of White-headed Ducks.  Amongst the House Martins and Barn Swallows I found a Sand Martin.  We said our goodbyes.  John saw an Iberian Grey Shrike on his way home.
A total of 46 species today.  A good day in good company.
Regards, Dave
Check out the accompanying website at http://www.birdingaxarquia.weebly.com for the latest sightings, photographs and additional information
Posted by Bob Wright - The Axarquia Birder at 01:10