sad to say had to postpone/cancel today's visit to Attenborough due to expected bad weather but, at the last minute, took myself off to Welney Wetland Centre near march on the Cambridgeshire/Norfolk border.  Indeed, surprised to see how close the site was to Stamford and arrived just over an hour later than mt 9.30 departure.  Very pleasant weather all morning apart from the stiff breeze but plenty of shelter and the two and a half hours stay produced almost 40 species.

Driving through Welney village I recorded Collared Dove and the local Rooks plus a Kestrel resting on the wires.  And then, as I approached the Visitors Centre on Hundred Foot Bank, not just Crows and Magpies on the bank  but my first sighting of the hundred plus Whooper Swans still wintering on site.  Add on a few Mute Swans and it was like looking at a flock of sheep on the bright green fields.

Once inside the delightful Centre I went immediately upstairs and out onto the viewing area to take a long look over Lady Fen and the surrounding fields and waters.  Wood Pigeons to the back but plenty of Coot and Wigeon along with Mallard, Shoveler, a couple of Gadwall, a number of Shelduck plus a few Oystercatchers and a few score of Lapwing set against a backdrop of scores of mainly Whooper but also Mute Swans.
Nearer to me the feeders were attracting a dozen or so Tree Sparrows and a steady flow of, mainly male, Reed Buntings.  Moorhens wandered up to join a few Mallard looking for fallen scraps and I also noted at least three Little Egret.  Joined by a couple of other birders we then managed to find a single quartering Marsh Harrier and a couple of resting Buzzards.  Below the Buzzards one of the local White Pheasants put in a brief appearance ad that led to us locating the only Great White Egret of the morning. "Normal" Pheasants to my left along with a few Common Starling plus the finding of a couple of Heron and many, many Black-headed Gulls.  Finally, at the very back of the water, a handful of Greylag Geese were recorded. 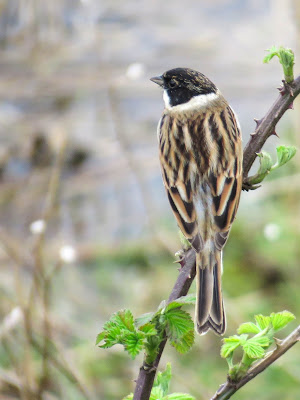 A walk over the long footbridge to check out the main lagoon from the provided observatories confirmed the very high water level (I had already driven across the flooded plain with the water lapping the road on either side) but relatively few birds.  Most, manly Mallard and Wigeon, were resting on the bank below the hides whilst out on the open water we had a good flock of Pochard and maybe a score or more Tufted Duck.  Just the odd Coot but on a narrow, shallow spit to my right not only resting Wigeon but a pair of Teal, a couple of Redshank and a handful of Black-tailed Godwits plus two Herring Gulls.
To my left also the, I would think, closed newly constructed duck trap was providing shelter for many of the Pochard and a couple of Whooper Swans.

It was then back across the road to the main Centre for a final look over Lady Fen which produced a movement of maybe a thousand plus Golden Plover to join some additional Shelduck to my right before heading back out to the car as Blackbird flew past me.  An easy journey back to Lincolnshire and you know that you are approaching Stamford when you start to see Red Kites in the air above you.
In addition to the wildfowl, I had splendid views of the local Brown Hares and a herd of five young Red Deer wandering through the meadow in front of me.  Given the sudden decision to visit this site it proved most enjoyable and a reason to try and fit in another visit in May.