Spain: From North to South

At last, back into Spain and on my way home.  An overnight stop very close to Vitoria in the north then first thing Tuesday in torrential rain and a temperature of barely 20C toward the Picos de Europe with a morning stop on the coast at Noja.  Beautiful and bright on top of the Picos having taken the first cable car up at Fuente De on Wednesday morning and the next day the long drive south via Leon to Extremadura.  Temperatures now averaging about 38C and, finally, on the Friday morning the final leg home after a morning detour through the Manfrague National Park.  Home in Mezquitilla around 6pm where I found a slightly cooler temperature of 31C in clear blue skies but, alas, it was fiesta week-end so continuous fireworks and music all night!

Tuesday:
The rain eased up and finally stopped so I was able to enjoy the new nature reserve on the coast at Noja based on an old flour mill at the Marismas de Santoña, Victoria y Joyel Natural Park.  Beautiful setting and whist waiting for the 10 am opening I took a look at the surroundings and found both Cattle and Little Egret along with Heron, Mallard and a Black-winged Stilt.  However, pride of place to the lone Red-backed Shrike that was posed on top of a large, green bush. Coot, Moorhen and a Common Sandpiper at the edges and over the water Barn Swallow and House Martin.  In addition to the Mallards we even idientified both Tufted Duck and Pochard plus Little Grebe and a juvenile Great Crested Grebe.

The "drowned" Buzzard resting on a boundary fence during the recent rains had now sufficiently dried off to take fight and both Yellow-legged and Black-headed Gulls were seen along with a handful of Sand Martins.  Following information from the local warden I stopped at the nearby coast as I started off and duly found a trio of Shag whist looking back at e above waters from an observation tower I noted a single Cormorant.  A great start to being back in Spain.


Arriving for two nights at Camaleno a walk along the river bank and nearby lane produced both Common Redstart and Goldfinch along with many House Martins and White Wagtails.  Above me not just Griffon Vultures but also a Short-toed Eagle and a stop to retrieve the camera made me realise that I was also looking at an adult Golden Eagle.

Up early and at the cable car station at Fuente De by 8.30 so that I was able to be in the first car up the mountain at 9am.  What a beautiful morning up on the Picos de Europe, the first clear day for almost a week so, not unnaturally, there were to be loads and loads of tourists to follow me.  But, arriving early I at least had chance to find the local Alpine Accentors along with both Raven and Griffon Vulture.  I also had a trio of (Yellow-billed) Alpine Choughs.


Unfortunately, neither Wallcreeper nor Snowfinch, probably too late in the season and too many visitors so a good reason to return at some point in the future.  But I did get very distant views of a trio of Chamois high on the opposite clifftop. 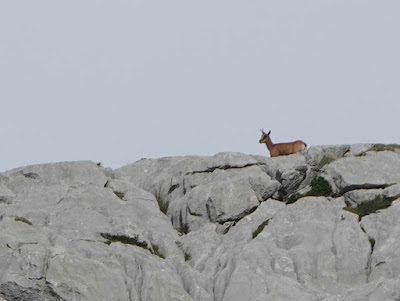 The morning also presented both Grey Wagtail and Barn Swallow and, after departing Fuente De where the local tannoy was announcing that the back of the queue had a three-hour wait for their cable car!  Time to explore the local countryside before an afternoon siesta and preparations for the early start in the morning.

Sitting in the car and about to move off and I noticed that a Chaffinch had arrived to bid farewell then back via Potes I took the mountain road towards Leon.  What beautiful and magnificent scenery; an absolute delight to appreciate the landscape with hardly another car in sight.  Approaching the summit I had numerous White Wagtails before a lone Dunnock slipped across the road in front of me.  At, or very near, the top a trio of Rock Pipit followed by a handful of Rock Bunting.  Next up a couple of Serin and then the easier slope down towards the plain.

More and more Carrion Crows seen along with Blackbird, Magpie and Wood Pigeons.  A female Black Redstart was a welcome sight and then a stop for morning coffee and the sight of local Barn Swallows.  Continuing southwards I noted Griffon Vulture and Buzzard and then I was at the nature reserve iat the Lagunas de Villafafila only to discover the locked gates.  Not to be thwarted, I found a neighbouring track and spent over twenty miles exploring this steppe land.  No sooner had I set off than I had a coupe of Norther Wheatear, Booted Eagle, Short-toed Eagle and Raven.  Smaller birds included Stonechat, Melodious Warbler, Hoopoe and Blackbird.  Not just Common but many Lesser Kestrels were recorded.


Once at the end of the tracks and time to head off to Oliva de Plasencia in Extremadura, I also saw the first Spotless Starlings, Black Kite and a number of Bee-eaters.  A few hours later and safely ensconced in my overnight accommodation I took a drive over to relatively nearby Monfrague to explore the northern end of the park including the rivers west of the dam.  What a sad sight with low water levels and everything looking very dry and sad.  Lots of Griffon Vultures along with both Crag and House Martins.  Looking down on the river form the nearby mirador I saw a single Little Egret and a trio of Black Stork.  Later I was able to add both Cormorant and Heron and, as well as the Sardinian Warbler that crossed the road in front of me, I also eventually came across my first Azure-winged Magpie.

Time to go home taking the same route as last night but continuing straight through Monfrague to the lovely town of Trujillio. Having just crossed the long road bridge I stopped in the shade of the trees and was able to watch the feeding Chaffinches, Blackbirds and Great Tits.  Also present, feeding on the ground, was a single Hawfinch.  A family of Red-legged Partridge had already been seen and soon I was at the main rock watching the scores of Griffon Vultures.  Also present both Crag Martin and Rock Dove whilst both White Wagtails and Red-rumped Swallows were also recorded.


Below me I eventually found the first Blue Rock Thrush and, moving on, I also added Bee-eaters, Stonechat, Magpies and Spotless Starlings as I entered Trujillio.  The final local bird was yet another Buzzard.

Very high temperatures as I continued south to complete my journey from the far north on the French border to the far south in Malaga province but also still able to add Collared Dove, Both Crested and Thekla Lark, Azure-winged Magpie and yet another Buzzard taking the number of species seen on the drive south to over 65.  A very long and tiring journey but undertaken at my own pace and own company with such beautiful scenery which will always be in my mind.

Check out the accompanying website at http://www.birdingaxarquia.weebly.com for the latest sightings, photographs and additional information
Posted by Bob Wright - The Axarquia Birder at 12:06