Looks like today was going to be my last birding visit before setting off back to Spain at the week-end.  Awful weather yesterday and even worse to come tomorrow so more a case of finding thirty minutes between the storms (you decide whether that means local weather of the fact that Jenny flies home tomorrow and shopping is the top item on today's agenda) but a potential opportunity if I can b e out and back by mid-morning.  No brainer really so off to the local patch at Rutland Water to take a look at Burley Fishponds and the neighbouring North Arm for fifteen minutes.

Magpie as I passed alongside the reservoir and then, upon arrival, scores of Cormorant and almost as many Greylag Geese plus a good number of Canada Geese.  Only a handful of Mallard but  about 40 Tufted Duck and, it would appear, too early for any returning Wigeon.  Also seen a dozen or so Mute Swan and a couple of Great Crested Grebe but, on checking the North Arm lots more noted.  On the far side of the Fishpond a couple of Little Egret and just a single Coot noted.

Whilst there was a small number of Black-headed Gulls over the main water a single Great Black-backed Gull was resting on a nearby nestbox pole and, on the grass below, a pair of Carrion Crow.  Feeding hirundines over the water and neighbouring fields included both Sand Martin and Barn Swallow.  Naturally, there was a good number of Wood Pigeon to be recorded.

All being quiet I thought I would pay a quick visit to the feeding station at the Visitors Centre as you can never be sure what might be about.  Probably a major mistake with Bird Fair opening in the morning and lots of people setting up so car parking was on the grass behind the main car park.  Fortunately, plastic sheets down on the worst of the rain damage and I was then able to walk to the VC and keep myself free from the surrounding mud.  Come tomorrow me thinks vision of Glastonbury past and present might be appropriate!

Having already passed both House Sparrow and Collared Dove driving through Egleton itself the first birds noted in the feeding station was a pair of Collared Doves doing a balancing act on the feeders as they sought out some food.  Just the occasional Blue Tit then a couple of very "scraggy" Dunnock in the middle of a major moult.  As the dust settled more Blue and Great Tits plus a single adult Robin and then a quartet of Blackbirds, probably adults with two youngsters.  So, thirty minutes and 23 species recorded before heading back home for the dreaded shopping expedition.  Or so I thought as by mow exhibitors were queueing up to enter the site on a single lane track and two of us trying to escape in the opposite direction.  Well, that's my excuse for not being home on time! 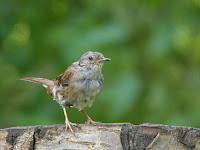 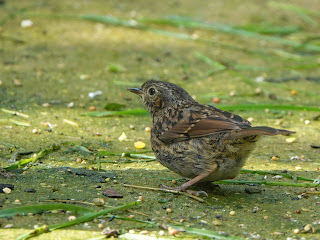 Looks like a mixture of annual and juvenile moult, probably adult and young Dunnock Prunella modularis


Check out the accompanying website at http://www.birdingaxarquia.weebly.com for the latest sightings, photographs and additional information
Posted by Bob Wright - The Axarquia Birder at 07:43