Away before 8,30 after taking a local breakfast and at the Odiel Vistors Centre by 9.45.  However, I did make a thirty minutes at the Laguna Primera de Palos (entrance track start at KM13 on the Matalascanas to Huelva coast road) which. judging by the growth over the track, has probably not been visited for very many months.  Arriving at the brisk observation hide a Red-rumped Swallow dashed out and I discovered that it had made its fabulous nest on the ceiling. Looking out through the window a Kingfisher flashed past to the other side of the water and I also recorded Purple Swamphen, Heron, Cetti's Warbler, Moorhen and Coot.  A Great Tit was calling from the vegetation behind me and a Blackbird flew across the water,  I, perhaps, should point out that as soon as I entered and immediately saw the Kingfisher I left the hide and did my birding the other side of the trees some thirty or more metres away.


However, these were not my first birds of the day.  El Rocio seems to be full of House Martins and I even had a Black Kite resting on top of a pylon not fifty meres away from my fabulous hostal.  More Black Kites on the journey down to Matalascanas along with White Stork, Woodchat Shrike and Corn Bunting.  A Magpie on the roundabout at the bottom and then an Azure-wined Magpie over the A494 before reaching the nearby first roundabout.

Lots of White Storks on nests as I made my way through Huelva and then arriving at the Odiel all seemed very quiet.  The salinas were full of water starting the process of evaporation to collect the salt and, as usual, there was a huge stockpile of salt plus scores of completed bags probably containing a cubic metre each. The small pool has limited water but still held a Spoonbill, a few Mallards and Pochard and I even found some moulting Red-crested Pochard. Just the odd Coot, Moorhen and Little Grebe but many House Martins taking advantage of the mud supply so that they could get on with their building programme.  Common Swifts and Yellow-legged Gulls above and a Reed Warbler below the hide.  A pair of Blackbirds in the nearby gardens and strange to suddenly come across a Wood Pigeon.  Walking back to the car I found a pair of Yellow Wagtails in the bushes between road and salinas and whereas the one was a blue-headed member of the Iberian sub-species, the second was grey-headed sub-species.

What a disappointment at the Visitors Centre.  Looking at the the tributary below just one Little Egret and two Ringed Plovers.  A walk across the disused car park to look at the Odiel produced a small mixed flock of Dunlin and Sanderling. Taking a walk down to the circular hide past all the feeding Flamingo I was able to look out across the mud flats for some sign of bird life.  One Spoonbill and a solitary Shelduck flew over the hide to join the Flamingos. Quite a number of Grey Plover, some showing very black and others looking like females.  Then the fishing display by a half-dozen Little Tern; very spectacular.


And so the drive down the spit with now "No stopping" signs, presumably aimed at the fishermen rather than birders who, at least move on once birds have been seen and identified.  Lots and lots of Little Terns and I was sure that I saw a Black Tern over the Odiel.  Small flocks of waders on the exposed sand bars including Dunlin, Ringed Plover and Redshank and then a quartet of Whimbrel as I came to the end of the narrow drive.    All very quiet on the sea side of the road with just the occasional Crested Lark.


At the far end I saw more Little Terns both fishing and resting on the sand below me.  Then I saw my Black Tern again but much as I searched the water it remained out of sight.  Then looking at the nearby Little Terns there it was.  With my scope out to see if there might also be a Sandwich Tern I discovered the two Common Terns but none of the former.

Happy me as I started to set off back up the spit and towards Huelva when I stopped almost immediately to check out the large "Whimbrel" in the group of same.  Yes, a Curlew.  Again, just another ten metres or so along an another group of waders with a single larger member.  Turned out to be about a score of Dunlin with a visiting Bar-tailed Godwit.  And the last bird before leaving the marismas was a Sardinian Warbler that flew across the road in front of me,

2.30 saw me back in Matalascanas so I dropped in to the Acebuche Reserve for a couple of very productive hours.  White Stork on its regular nest above the Visitor Centre and loads of Azure-winged Magpies feeding on the scraps left in the picnic area next to the car park.  An occasional Magpie and even a Collared Dove put in an appearance.


The hides to the right (sounds like the House of Commons Speaker with a lisp!) produced good numbers of Purple Swamphen plus Common Pochard, Mallard, Little Grebe, Moorhen and Coot.  The adult Stonechats were busy feeding and supervising their newly-fledged young and both Barn Swallow and Common Swift were seen overhead. 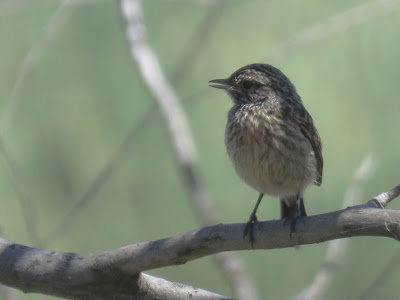 Lovely to see some more Spoonbill and then back to check out a couple of the hides to the left. A Goldfinch in the trees to my right and then the head of deer walking behind the reeds,  Rushed to get the camera fired up but the animal came out into the open to dink at the water's edge.  A rather large and magnificent Red Deer doe.

Whilst here I also watched the Hoopoe fly over and a Reed Warbler came o rest on a branch below me.  Through the left window I watched a couple of Greenfinches land in the tree and finally decided it was time to start the walk back to the Visitors Centre.  No sooner had I started than I had both Corn Bunting and Chaffinch on the bare tree in front of me followed by that well-know song of a Bee-eater.  There it was, at the top of the same bare tree and its friends calling from all around.

Making the long trek back I also watched both Barn and Red-rumped Swallows and nearing the Centre some of the nesting House Martins.  Even a couple of Black Kites resting atop adjacent pylons as I drove out if the reserve to mark the end of a fabulous day,

Check out the accompanying website at http://www.birdingaxarquia.weebly.com for the latest sightings, photographs and additional information
Posted by Bob Wright - The Axarquia Birder at 11:02