Collected visiting birders Nigel and Judy Lambert from Melton Mowbray, UK and we were at the Guadalhorce by 9.15 for a morning's birding in very warm and sunny conditions but a stronger breeze than had been anticipated; but definitely short sleeves and shorts!  No sooner had we arrived and we seeing many House Martins, especially at their nesting site under the footbridge, along with the resident Rock Doves below the motorway bridge.  But no red-rumped Swallows seen all morning.  A good number of Common Swifts were feeding higher in the sky and as we reached the end of the bridge looking down to our left we had a good view of of a feeding Spotted Flycatcher.

On to the Laguna Casillas which contained a few Coot and a number of Black-winged Stilts along with a couple of Little Grebe.  To our left a pair of Mallards and a quartet of Common Pochard before we found the single male White-headed Duck.  Both Cetti's Warbler and Nightingale were very vociferous with their songs and hen the arrival of our first Little Egret.

Meanwhile, on the opposite side of the track, we were able to take a very close look at a basking snake, at least two meters long.  And what about those strange blue eyes?  It has now been confirmed as a Montpellier Snake Malpolon monspessulanus and at about the maximum length for this species.  Literature describes it as a mildly venomous rear-fanged colubrid - so don't stick your finger down its throat! 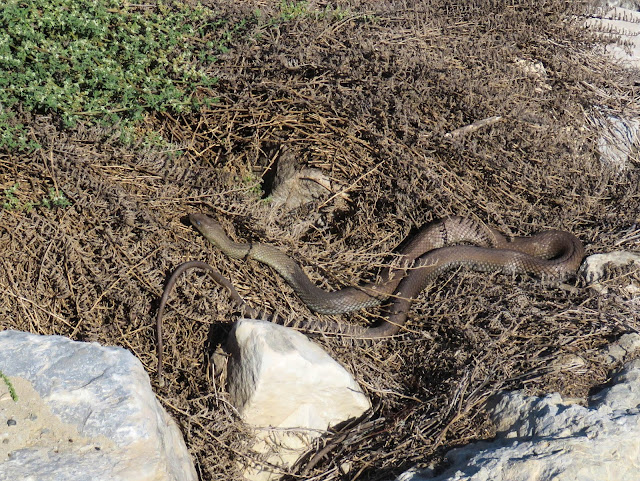 On reaching the Wader Pool we were immediately confronted with not only more Black-winged Stilts but eight Avocet and a handful of Redshank and Ringed Plover.  In addition, we managed to find a pair of Dunlin and a couple of Collared Dove flew over the water.  Not only House Martins but now also Barn Swallows and a check on the "dark shape" in a distant bare tree revealed itself to be our local Osprey.  A great surprise as I thought it would surely have moved on by now.  It did eventually lift off and circle a few times before drifting up river to presumably sort out a mid-morning snack.

Then, looking behind us, a most handsome male Serin had come to visit, resting on the nearest tree.

Quite a lot of waders to be sen on the Rio Viejo (Old River) along with hirundines overhead and passing Collared Doves and Monk Parakeets.  Very good numbers of both Kentish and Ringed Plovers along with a Grey Plover.  Many more Black-winged Stilts and another couple of Avocet.  Lovely to notice the small flock of Sanderling with most now well into their breeding moult.  Whilst we id see a couple of Lesser Black-backed Gulls the majority of the others were Slender-billed Gulls and hiding amongst them a pair of Sandwich Tern.  Walking back from the Sea Watch we also picked up a rather lovely Woodchat Shrike and, of course, a number of Spotless Starlings.  In addition, Nigel happened to be looking in the right direction when the Red-legged Partridge made its short flight out of the long grass whilst I followed the path of the distant Grey Heron.

The walk back and on to the Laguna Escondida produced a male Sardinian Warbler, female Kestrel and a small number of Goldfinch.  Once ensconced in the hide very little to see at first until the appearance of three White-headed Duck, a couple of Pochard and the same number of Little Grebe.

The Laguna Grande was its usual busy self with a good number of Black-headed and even a handful of Yellow-legged Gulls.  A few more Black-winged Stilts and a nesting pair of Avocet before concentrating on the small waders below the hide.  Just the single Curlew Sandpiper but at least five Dunlin and about a half-dozen Kentish Plover.  Again, more Ringed Plover but no Little Ringed Plovers.  Out on the water itself we had a trio of Flamingo and a pair of resting Shelduck.  And then it was time to return to the car, picking up a male Blackbird on the way, and make our way onwards the airport for a well-deserved lunch break.


Suitably refreshed we then headed down to Zapata with a first stop at the ford.  Lots of House Martins and Barn Swallows in the air and a small number of Goldfinch and Linnet feeding at the water's edge.  Unfortunately, a couple were messing about near the weir upstream where we would have expected to find our waders so we concentrated on the ford itself.  A Night Heron was happily sitting on a small rock adjacent to the downstream edge of the ford and then a Little Egret came to join him.

Time to cross the ford with the usual stop mid-stream and on up to the bridge to check out the drainage channel.   The back to the ford, stopping to watch a pair of Blue-headed Yellow Wagtails and a Crested Lark, before eventually re-crossing having stopped to take closer looks and photographs of the Night Heron which had now returned to the same position.  Once across the water we turned the car round to watch the arrival of the small birds coming down to drink.  Then, wonders of wonders, not another Blue-headed but a Western Grey-headed Yellow Wagtail Motacila flava thunbergi but before we could photograph a white van trundled by on the blind side and the bird was off down stream.

Seeing that our couple upstream had now moved on we took a short walk in that direction and found another couple of Little Ringed Plovers plus a Blue-headed Wagtail immediately in front of us.  On the far side we found the lone Common sandpiper as a Moorhen paddled away to our left and, finally, the arrival of a Cattle Egret.  A White Wagtail appeared on the opposite bank.


Common Swifts were now overhead as we made our way back up to the main track and on towards the airport via the Mass reed bed.  Greenfinch, Blackbird and Stonechat were added to our sightings for the day and stopping to watch the avian activity in the wide crossing/gap in the reeds w enjoyed the bathing display of Linnets, Goldfinches, Blackbirds and Spotless Starlings.  Amongst the many House Sparrows we even managed to find a male Spanish Sparrow.  Continuing on we picked up more Blackbirds and Serins and a male Sardinian Warbler on the track whilst the Cetti's Warblers and Nightingales continued to serenade us with their very recognisable renditions.  By the time we returned to the city we had managed to record 53 species.


Check out the accompanying website at http://www.birdingaxarquia.weebly.com for the latest sightings, photographs and additional information
Posted by Bob Wright - The Axarquia Birder at 07:30