Just over 20 of us turned up at the Abades Service Station on the A92 for the first of this month's field visits of the Andalucia Bird Society lead by local guide and ABS member, Mick Richardson.  The plan was to ascent to over 1500 metre on the Sierra Loja in the morning to find the newly-arrive Ring Ouzels and, hopefully,  some of the resident Alpine Accentors with just the possibility of an early Fieldfare or two.  A continued visit to the fields of nearby Huetor Tajar was designed to find the wintering flocks of Stone Curlew and Little Bustard.  In the event, we record all five species with most members happy to see them all along with a lovely range of other birds which gave a final tally of at least 55 species for the day.

The day started clear and sunny on the coast wit a temperature of 12 which reduced to 9 as soon as I reached Punta Don Manuel and then on down to 4C as I took the country road beyond Zafarraya.  Mick told me that the local temperature had been a miserly 2C in Loja! So on to the meeting place recording Collared Dove, Sardinian Warbler, Goldfinch and Chaffinch along the way to be greeted by the local House Sparrows. Those arriving a little earlier than I had recorded good-sized flocks of Azure-winged Magpie but I had to wait until a couple crossed the motorway as we travelled on to Huetor Tajar. A few members also saw/heard a Robin in the car park area.

Having organised the group into as few cars as possible, we set off up the mountain track to go directly to the best area for the wintering thrushes.  Just the occasional stop on the way up and Blackbird, the first of two Dartford Warblers seen during the morning, Rock Bunting, Thekla Lark, very many Black Redstart, Corn Bunting, Stonechat and Black Wheatear recorded.  Once in the designated area we quickly added Goldfinch, Serin and Linnet and then the search began.


Having found the first pair of Ring Ouzel we then, as usual, simply added more and eventually recorded at least a score of individuals.  Interesting to see the visitors from both northern Europe and the paler sub-species arriving form the Pyrenees.  Mick and others could hear the Alpine Accentors calling and eventually most, I think, managed to catch at least a short glimpse of this handsome little bird.  As an added bonus, a single Fieldfare was disturbed and a few of us caught sight of his rather rapid disappearance to the right.

Whilst spending some time in this area we also added a small covey of Red-legged Partridge and a single Chough flew over.  Lovely to see small flocks of Rock Sparrows but no Crag Martins this morning.  On the other hand, Derek and party found a Blue Rock Thrush and then Lindsay identified the first Little Owl of the morning.  Starting to work our way slowly back down the mountain a stop for a quick view of a Cirl Bunting before an approaching car on the narrow track forced us all to move on so resulting most missing this sighting.  A not infrequent sighting of the occasional Meadow Pipit but nothing "special" found at the Charca del Negra ponds or the old quarry save another Dartford Warbler.  However, passing through the final trees before arriving at our starting point we were able to add Great and Blue Tit, more Chaffinches and a Mistle Thrush. 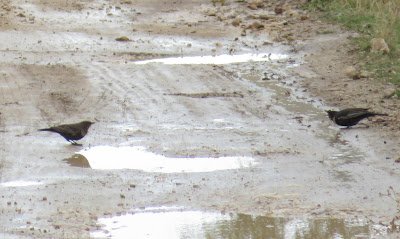 Once at the start point we added a passing Raven above the trees and a small party of Wood Pigeon whilst an Iberian Grey Shrike was working the field's edge.  Picnic lunches completed we moved off to Huetor Tajar and took the small footpath through the fields at the edge of the town.  A single White Wagtail and more Black Redstart along with a few Meadow Pipit, Goldfinch and Crested Lark before we saw a flock of about 25 Little Bustards fly in to graze a few hundred metres further on.  A Sky Lark was seen and then the Stone Curlews.  Not the 100 plus we expected, only a handful but, on the other hand, we did have a party of almost thirty Little Bustards so saving a drive to the far end of the area in search of these lovely visitors.  Also close to this mixed flock were eight Cattle Egrets and a single Lapwing.  However, on the other side of the path there was a feeding Lapwing flock of well in excess of 100 individuals!  Making our way back to our respective cars most of us also picked up a couple of Chiffchaff as well as the mixed sparrow flock of mainly House but also a few Tree Sparrows feeding on the stubble along with both Collared Dove and Wood Pigeon.

And so to our final stop on a muddy track near a favoured site for Bluethroat.  A female Sardinian Warbler and then the Bluethroat itself was observed.  In the far distance a Buzzard was resting atop an electricity pylon.  Cetti's Warblers were calling as we made our way through the neighbouring field towards the railway line.  A good number of Corn Buntings here but also at least eight Reed Buntings and a few Stonechat.  A Zitting Cisticola was seen and amongst all the Spotless Starlings on the wires above the railway line we also manage to observe a single Northern (Common) Starling.  This area also produced a pair of (common) Magpie.  A walk back along the track towards the road produced a distant Kestrel and Lindsay, walking behind Mick and I, saw the Snipe fly up out of the ditch as we passed by.  A few Cattle Egrets were recorded and the final bird of the day was the departing Grey Wagtail picked up by Mick, Pauline and Lindsay.  Or should I include the small number of free-breeding Muscovy Ducks on the river bank on the edge of the town that seem to have take refuge amongst the small population of domestic/hybrid geese?

A really wonderful day despite the low cloud with a friendly group of supportive birders and with many thanks to Mick for his expertise and local knowledge.  And we even manged to be in our cars and setting off for our respective homes just before 6pm when the promised rain looked very much as if it was about to start.

Check out the accompanying website at http://www.birdingaxarquia.weebly.com for the latest sightings, photographs and additional information
Posted by Bob Wright - The Axarquia Birder at 04:08