The forecast said to expect rain but upon waking twas a beautiful clear and sunny start to the day and the temperature rapidly approaching the low twenties.  So what better way to celebrate than take the short trip down to the Rio Velez just west of Torre del Mar for a couple of hours birding.  Upon arriving I had a gorgeous Grey Wagtail descend to the river bank and then a White Wagtail on the track leading to the beach beyond the road bridges.  Add on both House Sparrows and Blackbird and I thought I was in for a great birding walk.  Not so.  Plenty of water in the river which has attracted a score or more Mallards to join the few resident Moorhens but so much bamboo and reed growth that it was almost impossible to see the water, even more so as I moved along.

Cetti's Warblers were calling and at least a handful of Black Redstarts recorded.  A solitary Green Sandpiper landed on the mud below me and a small number of screaming Monk Parakeets flew over.  Upon reaching the hide all seemed very quiet.  A single Cormorant flew low upstream over the reeds and next to the pumping station I picked up half-a-dozen Spotless Starling before spotting the male Sardinian Warbler.  Above me a few wandering Black-headed Gulls and maybe a dozen or more distant Crag Martins down from the nearby mountains.

A short walk to the beach revealed nothing and with a mixture of the deep channel cut through the beach and the very high vegetation it was impossible to actually see the river.  Even a walk upstream failed to provide a gap to reach or even get a view of the water so back to the hide.  A Serin landed opposite and ion the fields a pair of Crested Larks were bust foraging.  Nothing for it but to make my way back to the car picking up both Robin and Chifchaff on the way.  A Goldfinch posed on top of a gate and at the bridge only a few of the resident Rock Dove flock.


The short drove to the other side of the bridges through the fields presently being planted with either lettuce or greens revealed more Goldfinch and even a Chaffinch.  Just the one Collared Dove and then the muck heap.  Who said nobody likes a muck heap?  This was one that had attracted a dozen Cattle Egrets and many House Sparrows and White Wagtails.  So, less than two hours for a total of 24 species. 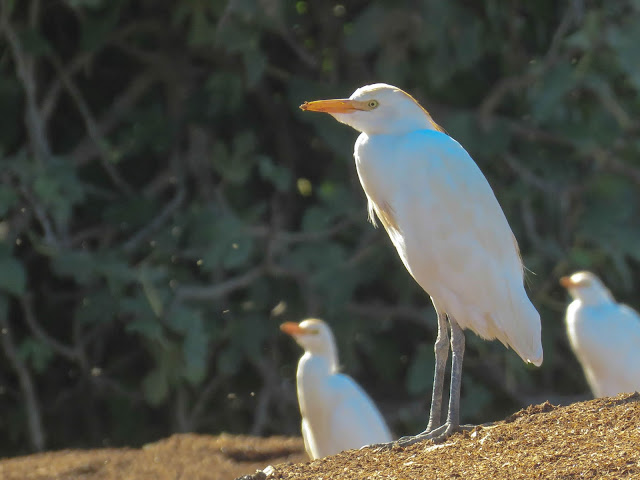 Check out the accompanying website at http://www.birdingaxarquia.weebly.com for the latest sightings, photographs and additional information
Posted by Bob Wright - The Axarquia Birder at 05:45