Looking forward all week to meeting up again with my old fried Dave Elliott-Binns of the Arboleas Birding Group up well beyond Almeria for a morning's birding at the Charca de Suarez in Motril.  On this occasion I was also able to take newly-met birders Rob and Louise Scheffer from Torrox Costa with me.  However, the forecast was not that brilliant with rain forecast between 11 and 1 o'clock but the journey was dry  with calm and cloudy skies with the odd break.

A little time in hand before the 9 o'clock opening so we made the slight diversion to take in "Turtle Dove Alley" getting a sighting of a lone Cattle Egret on the wires as we approached.  No sooner onto the concrete road than we had both Collared and Rock Dove along with a trio of Spotless Starlings.  On for a hundred metres or so and we stopped to watch the smaller birds picking up grit/feeding on the road amongst some discarded brick rubble.  Up first both House Sparrow and Serin and as the birds moved about they were joined  by a few Greenfinch but ere long arrived the much smaller birds and Rob and Louise had their first sighting of a Red Avadavat.  Looking at the House Sparrow I realised that at least one had a "split" bib and closer inspection revealed it to be a Spanish Sparrow.  Then on to the end of the road with a couple of Blackbirds were recorded before making our way to the Charca entrance where Dave was awaiting us.  Looking back, other than the noisy Cetti's Warblers and the "special" seen from the new hide these were to be our only small birds of the morning.

Collared Doves overhead as we made our way to the bamboo hide overlooking the Laguna Taraje where we immediately had both Red-knobbed Coot and a couple of Purple Swamphens out in the open and giving excellent views.  On the water a pair of Mallard and a handful of Moorhen plus a pair of Little Grebe with three very young, weeks at most, youngsters.  Certainly very late as we were later to see full grown juveniles.  At the far end of this water we picked up Common Coot.


Next to the large hide overlooking the Laguna del Alamo Blanco which always seems to attract the photographers.  Good levels of water and still clear weather.  The single White Stork was resting on its usual pile of dead reeds and in front more Moorhens and a number of Teal.  Also present were at least seven Common Snipe and then the arrival of a single Spoonbill showing a number of coloured rings.

A Marsh Harrier flew over putting up just about everything bar the White Stork and when calm returned we were delighted to have a fast-visiting Kingfisher flash over the water.


Meanwhile, immediately in front of the hide, a juvenile Bluethroat wandered casually along feeding on the muddy ground and was followed by a second.


At this point Dave waved me over to him, sitting at the far right-hand looking towards the water, as he was sure that he had seen a crake.  Sure enough, with a little patience, the Spotted Crake put in a couple more brief visits out of the reeds before moving to the back of the water.  Not only a Spotted Crake but one of the resident Water Rail also gave the briefest of glimpses to Dave in the same location.  Next a White Wagtail posed for a minute or so on top of one of the planted perches and a Heron landed at the far end before we made our way to the next water. 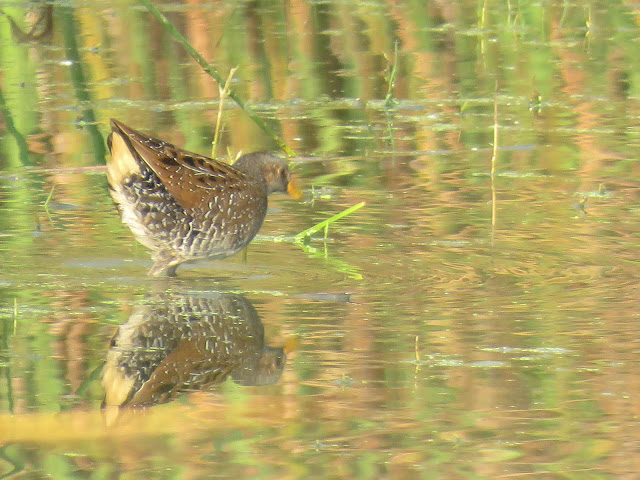 The Laguna de las Aneas held a couple of score or more Common Coots and maybe a score of mallard. A lone Cormorant rested towards the far end and a small number of Little Grebe were busy feeding.  On the island a trio of Shoveler and a single Pochard.  However, using the scope we were able to pick up more Pochard beyond the island and even a single Ferrunginous Duck.  My possible sighting of a Pintail proved accurate as the bird started feeding a little further away from the cover of the island. A pair of Little Egret arrived and we found a Heron resting on top of a tree at the far end of the water.  A passing Yellow-legged Gull was the only gull seen on the reserve.

Our final stop was to be at the Laguna del Trebor.  The weather had turned much darker and we certainly knew what was coming!  A number of Red-knobbed Coot and a few Mallard along with a tired looking Heron away to our left.  Another Kingfisher, one also seen by Dave at the previous water, flashed by and then the spots of the water told us what was happening.  Looking at my watch I saw it was 12.02 and with rain having been forecast between 11 and 1 it could not have been more accurate!  Nothing to do but wait ten minutes or so for the rain to stop, we thought, and make our way out to complete the circuit.  Or so we thought.  Reaching the entrance to the toilets, about as far away from the exit that we could possibly be, the heavens opened and it absolutely threw it down; nevermind cats and dogs more like cows and horses!  No point in us all remembering the coats and at least four umbrellas resting safely in our cars but we were saved by the warden who appeared in his van to give us a dry lift back to the exit.  And so we bade farewell to Dave and made our way back to Torrox Costa and hardly back on the motorway than the sun came out.  It turned out to be a very warm afternoon but everywhere in the Axarquia seemed to have had a good dousing.

Nevertheless, some great birding during the three hours of dry weather and some wonderful birds in great company.

Check out the accompanying website at http://www.birdingaxarquia.weebly.com for the latest sightings, photographs and additional information
Posted by Bob Wright - The Axarquia Birder at 01:23