Off to Loja area with Jenny to pay a visit to Mick and Jayne Richardson and on the way being very surprised to see a late Song Thrush dash across the road immediately in front of us ans we drove away from Zafarraya.  Also on the way we manage to record expected House Sparrow, Spotless Starling and both Collared and Rock dove.  Lots of Blackbirds about and a first Hoopoe.  Upon arrival we were delighted to see how well Jayne was progressing - and even Mick looked better and more relaxed than when previously seen a week or so ago.

Whilst we left the girls to do whatever it is that girls do, Mick and I took a short trip down to the local Rio Cacin which was only now staring to recede following the recent heavy rains.  Neither Siskin nor Hawfinch on Mick's feeders as we left but a first Blackcap and more Azure-winged Magpies as we made our way down the country lane.  Upon arriving at the river no chance at present of driving across the ford (unless you fancied abandoning ship half-way!) but immediately a trio of Lesser Ringed Plovers, Moorhen and the first of a number of Woodchat Shrikes whilst all around so many Corn Buntings.  Cetti's Warblers were calling , Barn Swallows collecting mud from the river edges and House Martins passing overhead as a lone Green Sandpiper made a hasty retreat.  We even managed to pick up a couple of Linnets.

Leaving the local Serins collecting nesting material from the track in front of us we took a new path to me after crossing the river.  No Yellow Wagtails but we did find at least four singing Nightingales, two more Woodchat Shrikes and Stonechat.  Two pairs of Red-legged Partridges flew across the track and then a longer stop to check out the small copse where Mick had seen many recent Hawfinches.  No luck but apart from the Wood Pigeons we had Great Tit and a number of Blackbirds, a healthy-singing Mistle Thrush on the wood's edge and even a calling Great Spotted Woodpecker.  Then of course we had to find one of the local Wrynecks.  Mick saw the flight and we knew which tree it had landed but where?

The return drive back to the starting point to once again unsuccessfully listen for the local Quail did produce both a male Sardinian Warbler, a couple of Tree Sparrows and, once back on the river bank, a Zitting Cisticola on the opposite bank.  A Greenfinch was foraging near us along with a resting (Common) Magpie an Mick saw a rarity fro the area, namely a Blue Tit. 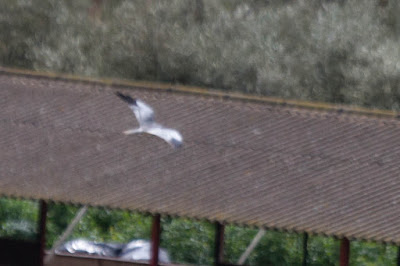 We eventually started back on the side road to Zafarraya but stopped at the Agricultral College to look for both Quail and Montagu's Harrier.  Only the second of these put in an appearance with one female and three male birds.  But a Northern Wheatear hopped up on to the fence a little further away as I watched the displaying raptors - but now conformed as a female Black-eared Wheatear, first of the year.


Finally, a very brief stop on the old railway line at Ventas de Zafarraya to watch the two dozen wheeling Choughs and also found a pair of Black Wheatears and a most handsome male Black Redstart along with the local Crag Martins so raising our final total to 39 species.


Check out the accompanying website at http://www.birdingaxarquia.weebly.com for the latest sightings, photographs and additional information
Posted by Bob Wright - The Axarquia Birder at 12:18