The ten-day wait whilst I try and recover from my chest infection over Christmas, nevermind the newly-acquired eye, was finally over and I managed to get out for a couple of days birding with friends, mainly in lovely sunny weather, and also try out the new eye following my successful cataract operation just before Christmas.  What frustration as I coughed away and wondered whether it would ever end but, come last Wednesday morning, I was up early and off to Casabermeja to pick up Bob and Noreen Ashford for the drive over to Osuna where we met up with Derek and Barbara Etherton and Ricky and Sonia Owen for our drive around the well-know "triangle" in search of the local Great Bustards.  And successful we were, too.

With Raven, Buzzard and Little Owl as we reached the meeting point we soon added House Sparrow, Spotless Starling, Collared Dove and the first Red-legged Partridge of the day within a few hundred metres of moving off towards the country lane.  Serins, White Wagtail and Crested Lark followed almost immediately and then a small flock of Linnets and we studied the railside fence. A lovely Red Kite put on appearance and we were to see many more during the day along with Buzzards and the occasional Kestrel. Flocks of Corn Bunting remind you how scarse they are becoming back in the UK and then a couple of Meadow Pipits feeding below the olive trees.  A Hoopoe flew over and then a rather handsome male Marsh Harrier.  The small trees alongside the fence held, it seemed, literally thousands of Spanish Sparrows which, of course, was a great delight to 'tother Bob.

A pair of Iberian Grey Shrikes on the wires as we approached the first high bridge over the abandoned high speed rail trackbed with numerous Stonechats perched it seemed just about everywhere led to us seeing a party of about twenty Great Bustards flying low on the other side and come down out of sight.  However, once on top of the bridge and able to scan the fields we soon our flock of Great Bustards along with quartering Hen and Marsh Harriers.

A couple of Sky Larks were singing their hearts out as we then picked out Goldfinch, Sardinian Warbler and Chiffchaff before heading of along the trackbed to the the viaduct over the well-known flooded field.  in amongst the Spotless Starlings we even found the odd Common Starling.  Nevermind stopping to look at the pair of White Storks on the right as there were hundreds on the left!  A small party of Teal were sheltering in some reed-infested grass and, on the opposite of the viaduct, a good-sized flock of Lapwing.

Meanwhile, a large number of White Storks and Rock Doves had taken to resting on the viaduct railings in front of us and as we scanned the ground below we picked up Black-winged Stilt and Mallard and Sonia and Ricky also added Dartford Warbler.

Then it was the short drive over to La Lantejuela for a welcome coffee before checking out the small reserve from the road where we added Mallard, Shoveler, Gadwall, Flamingo, Moorhen, Little Grebe along with feeding Blackcap, Black Redstart, Cetti's Warbler and a number of passing Woodpigeon.  Finally, as took the long drive down to Tarifa via Cadiz most were able to pick out the pair of Black-shouldered Kites and, of course, the numerous Cattle Egrets.

Suitably refreshed after a good night's sleep at Hotel la Torre we set off for a morning's visit to relatively nearby La Janda with a Buzzad watching us from a post adjacent to the car park. Not just more Buzzards but also a Little Owl on the wires and fields full of Cattle Egrets.  No sooner had we arrived on the track down to the canal than we stopped to scan the overall area and noted the hundred of wintering White Storks along with the first of a good number of Cranes.  The fences down to the canal produced Stonechats, Crested Larks, Corn Buntings and Linnets along with a distant quartering Marsh Harrier. Noreen even managed to see the lone Penduline Tit that just happened to alight on a fence post as we drove past.

Once alongside the canal lots to see including Meadow Pipits and a even a Water Pipit.  By now we had been joined by Jerry and Barabara Laycock and Sonia and company looked out of the car window to watch a feeding Penduline Tit on the bear bank as a Bluethroat worked the opposite bank and a Kingfisher chose that moment to fly between them both!  A good number of Zitting Cisticola were seen working the bank.  More Kestrels and the first of many Jackdaw as we made our way to the large, shallow pool where we found a trio of juvenile Flamingo along with a small flock of Spoonbill feeding alongside Little Egret and Herons.  Then we noticed  the score or more of Glossy Ibis.

Whilst we had a couple of Green Sandpiper feeding at the edge of the water it was odd to see the pair of Purple Swamphen take off and fly over the cars to land at the riverside grasses.  having received the news form visiting Spanish birders we spent some time scanning the flooded grasses and eventually found at least three Jack Snipe along a similar number of more of Common Snipe.  A couple of Redshank revealed themselves and a handful of Cormorant flew past overhead along with small numbers of Mallards - probably fleeing the distant shooting that we could hear.  At the same time a small group of falconers arrived with a Gyr Falcon and dog to try their hand at flushing out Snipe.  We left well before they got to work and disturbed the remaining wildlife. 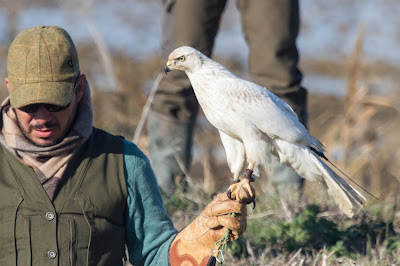 Accompanied by Goldfinches, Linnets, Serins and Jackdaws we made our way to the bridge as we took note of the distant Griffon Vultures soaring over the hills.  Much as we tried we were unable to find the wintering Lesser Spotted Eagle or resident Black-shouldered Kites but on driving up the avenue we did find a small number of Chaffinches accompanied by at least a couple of Brambling.  Both Pheasant and Red-legged Partridge were added to the list along with over-flying Crag Martins and, once again, the Red Kites put in an appearance.  Having stopped to watch a small party of feeding Short-toed Larks we then noted a quartet of quartering raptors including both Hen and Marsh Harrier whilst, overhead, a lone Bonelli's Eagle was making its way southwards.  Up past the "smelly farm" we had a very close view of a quartering male Hen Harrier and a Hoopoe looped away to our right.  Not just Kestrels here but most also saw the Sparrowhawk as it dashed away. 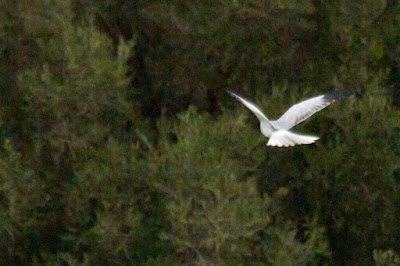 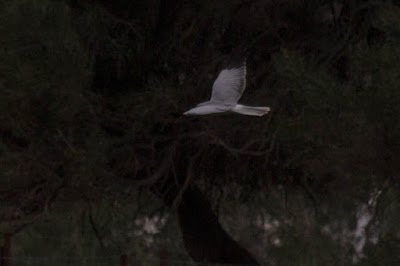 With time pressing on and we three three returning home this evening we bade our farewells and drove over to Barbate picking up a Bluethroat on the road as soon as we left the muddy track.  No luck in trying to find the Bald Ibis but we did add a Grey Wagtail as we drove through the outskirts of the town and at the estuary duly found Black-headed, Lesser Black-backed and Audouin's Gulls along with Kentish Plover, Little Stint, Dunlin and Sanderling.  Good numbers of Cormorants and the occasional Little Egret and Heron but the stars of the show were the good number of Stone Curlew resting on the nearby island and showing very well.  Chiffchaffs, House Sparrows, White Wagtails and Crested Larks fed on the nearby fields and a Black Redstart made a brief appearance as we finished our coffee and set out on the long journey home.

Check out the accompanying website at http://www.birdingaxarquia.weebly.com for the latest sightings, photographs  and additional information
Posted by Bob Wright - The Axarquia Birder at 02:40