Looks like a number of us were out birding yesterday following the heavy rain of Monday/Tuesday and we all seem to have seen some great birds.  Dave and his Arboleas Birding Group were at Cabo de Gata where pride of place went to the numerous Trumpeter Finches whereas I joined a group of friends to re-work the "Osuna Triangle" in Sevilla Province.  My blog to follow later.

Gilly was working again and my proposed passenger called off sick, so it allowed me to have an early start, so I headed south to Cabo de Gata. My first tick was a hovering Kestrel just outside Pujaire.  I made my way to the far end to commence the track round the rear of the reserve.  The weather wasn't ideal. It was overcast and windy.  The sun had just risen.   Not looking good for any photos.  I saw some Crested Larks before I started to see waders on the edge of the salinas. Redshank, Kentish Plover, Dunlin, Little Stint and Avocet.  In the water were Greater Flamingos and Shelduck.  Little birds included White Wagtail, Stonechat and Meadow Pipit.

I'd seen 16 species by the time I'd returned to Pujaire to meet up with the others.  John, Les and Alan joined me for coffee before we headed to the first hide, me seeing an Iberian Grey Shrike en route. Luckily the clouds had departed and the sun was out.  We'd hadn't long been there when we were joined by Jacky and a new couple, Lee and Debbie, who had been invited by Les who met them birdwatching in Mojacar.  Scanning from the right, Alan and I found Eurasian Curlew, Grey Plover, Mallard, Black Tailed Godwit and Black Winged Stilt.  I found 8 Spoonbill asleep in their usual location up the far end.  Alan spotted a Sardinian Warbler.  Jacky found Marsh Harrier way over to the left.  There was a small flock of Dunlin and Little Stints adjacent to the causeway next to 9 larger waders with their heads tucked in asleep.  Eventually one woke up to prove they were Black-tailed Godwit.  They were joined by a single Spoonbill.  Alan located a flying Raven which flew by and landed on a nearby pylon.

Prior to walking over to the second a quick sea-watch discovered a Sandwich Tern.  At the hide I saw a female Marsh Harrier quartering the savannah to our left.  Suddenly 30 odd Stone Curlew took to the air, some eventually landing nearby.  John found some Black-necked Grebe whilst I spotted an adult Gannet out to sea.  A Lesser Black-backed Gull flew by and Alan saw a Crag Martin.

I led the convoy to the public hide . As I came off the main road some small birds flew over the car and landed on the savannah.  My initial gut feeling was correct.  Trumpeter Finch.  We saw 4 together with Greenfinch and Serin.  Les, Alan and John arrived just as they flew over the road as they'd been sussing out what turned out to be a pair of Grey Plover further back along the road.  Whilst they searched for the Trumpeter Finches the rest of us went to the hide parking area.   Unbelievably another 6 Trumpeter Finches were perched on the fence.  A quick call got the lads to join us. Numerous Greenfinch were also fence perching.  On the causeway were Lesser Black-backed Gulls and many more in front of the hide.  I spotted a Dartford Warbler and our only Black-headed Gull of the day.  We said our goodbyes to Lee and Debbie as we headed to Rambla Morales.  Jacky wanted to go for a walk so we arranged to meet her at the cafe later.  As I drove long the straight towards Cabo village a flock of 50+ Trumpeter Finch flew over. 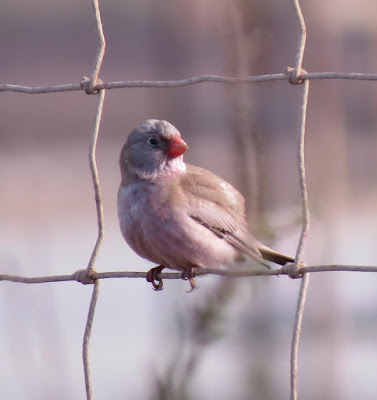 As I parked at Rambla Morales I could see about 8 pterodactyl like Cormorants hanging their wings out to dry.  They flew off as some dog-walkers went past.  An Iberian Grey Shrike was hunting nearby and caught a beetle.  It took us some time to find anything at the lake.  Alan first spotted some Shoveler, whilst I found 2 pairs of Wigeon.  Apart from a few Greater Flamingos and a Mallard, that was it!  A few Crag Martins were skimming over the reeds and some Lesser Black-backed Gulls flew over.  Not even Coot or Moorhen were seen!

Retiring for lunch we saw some passing Gannets out to sea.  On the way back to the motorway I had a Black Redstart near the greenhouses. We ended up with 43 species.  Was great to see so many Trumpeter Finches.
Regards, Dave

Sounds like a great day, Dave and in good company.  Just hope at least one of the Trumpeter Finches will still be about when I visit on 8 February following a day at Las Norias and Roquetas de Mar.  And your Lesser Black-backs look suspiciously like Yellow-legs.


Check out the accompanying website at http://www.birdingaxarquia.weebly.com for the latest sightings, photographs  and additional information
Posted by Bob Wright - The Axarquia Birder at 01:30