Mid-December and 3 new Species for the Year

Over to Loja mid-morning to visit our friends Mick and Jayne Richardson and check up all is OK, etc,  Arriving at Mick's home we had a good-sized charm of Goldfinches and a few Crested Larks.  No sooner had we entered the house than Mick was showing us not so much the House Sparrows but the small flock of Siskins feeding in the seed tray (first new species for year).

Leaving Jenny and Jayne at the house Mick took me down to the nearby fields where he had seen Brambling in the past week.  Both Goldfinches and Chaffinches along with a passing Greenfinch as we headed for the rived crossing but not before stopping to "stare" at the Little Owl in its favourite roosting tree about five metres away from the car.  Unfortunately, the sun, it being a bright and clear day with a warming temperature approaching 12C, was almost in our eyes so we left the little chap to sleep on knowing that we would have a second chance on the way back.

Reaching the ford across the Cacin river we stopped, wondered, debated and then thought, "Stuff this!" and ploughed on through to the far side.  Well, at least it cleaned all wheels and the underbody.  No sooner up the bank and the first Green Sandpiper of the day made a rapid departure and we stopped to check out the field opposite the rive for the recently-seen Brambling.  No luck but we did have a Hoopoe cross the road and then found a Snipe hiding behind a small bush at the water's edge whilst a Moorhen paddled across.

On to the bend we parked the car and walked down the track that followed the river.  Stopping immediately we had a number of Blackcap and a Black Redstart in the large, bare tree and then our first sight of a Brambling (second new species for the year) along with  a good number of Chaffinches and, looking up, we saw a "cloud" of Woodpigeons above the far tress so wondered what had put them up?  Meanwhile, lots of White Wagtails about which continued to be seen during the total of, probably, just under an hour that we spent away from the house and a number of feeding Chifchaff close to the water.

We had already recorded Blackbird and Collared Dove as we drove off in search of my third new species for the year which Mick had found, apparently wintering, less than a week ago.  Crossing the railway bridge we had a quartet of (Common) Magpie and a single Azure-winged Magpies.  Then a short walk on a very muddy piece of waste ground (how am I going to explain the resulting mess to Jenny?) brought Crested Lark, Corn Bunting and a number of Stonechat.  Yes, Mick had spotted our first Wryneck (new species number three) and soon we were creeping up trying to get a better view.  Turned out there were two individuals which then dispersed but with one landing in a distant, but clear, tree to give  a chance for an even better view.  Eventually the bird returned to it previous feeding patch so providing another sighting.  I went to check it out whilst Mick carried on up the field an found a third individual along with a Bluethroat.  Meeting up, we worked our way back to the road and the car, noticing the handful of Crag Martins in the sky above, and eventually the Bluethroat gave us a better sighting.

Returning alongside the river on the other side we got a much closer and well-exposed look at the Snipe.  Then it was on to find the Little Bustards.  But first a stop to photograph the Little Owl as already described and a Mistle Thrush flew across the field on the opposite side.  At the same time we picked up a very small flock of Lapwing in the field.  In the background beyond the green field we had a number of Sky Larks and there was certainly no shortage, as there had been all morning, of Spotless Starlings.  A Meadow Pipit was heard then seen and, eventually, we found a well-hidden Little Bustard.  But the more we looked, no scopes available today, the more we saw and certainly had very clear views of at least five individuals.  Meanwhile, behind us, Mick could hear a Dartford Warbler calling and eventually the bird moved so exposing itself to both of us.


Arriving back at Mick's home the Siskins had arrived in good numbers on both feeders so an opportunity to take photographs and note the different plumages between male and female.  A Great Tit arrived to join in the fun and having recorded 34 species in the hour we took our leave to return home via the back road to Loja, so missing out of the Stone Curlews which, in any case, had probably moved away as the farmers were busy working in their particular, preferred, field.  On the other hand, within 200 metres of Mick's house we had a Song Thrush at the side of the road which move into the olive grove as we approached so taking our final tally of the morning to a wonderful 35 species. 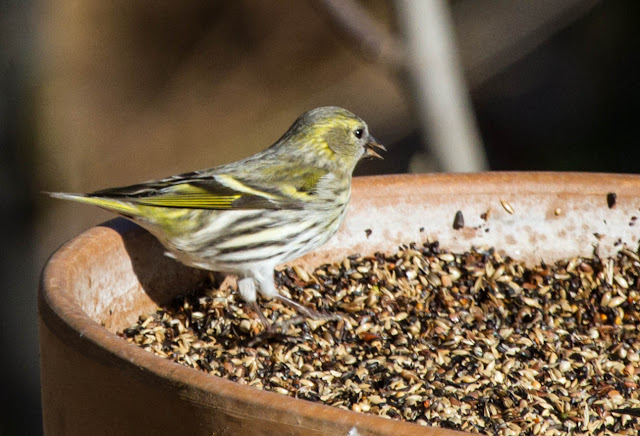 Check out the accompanying website at http://www.birdingaxarquia.weebly.com for the latest sightings, photographs  and additional information
Posted by Bob Wright - The Axarquia Birder at 10:56