Just back from ten days in Blighty where I was able to attend the opening day of this year's British Bird Fair just down the road from our little Stamford house at Rutland Water.  Even arriving before the official opening time I still had to queue and, unlike the three previous years, it remained warm and sunny all day.  By the time I left in the late afternoon to drive down to Cardiff for a family wedding the next day, the site could well be described as "heaving" so let's hope lots of visitors paid their entrance fees which all contributes to many exciting birding initiatives.  Lots of friends seen and made a special point of visiting both the Andalucia stall along with that of our local professional birders who were also promoting the Andlaucia Bird Society.  Not sure where Peter Jones was hiding but good to see Manu from Huelva, Jose Luis from Jaen and Luiz from Malaga.  Told they were all kipping down together in a neighbouring village so, no doubt, lots of alcohol would have been consumed over the four days!

As for local birding I found it very poor.  I paid a first visit to a relatively close site at Baston Fen and found nothing other than a single feeding Cormorant.  The nearby flooded gravel pit did have a few birds but nothing very exciting.  On the other hand, whilst at the Bird fair i did look up in time to see one of the local Ospreys fly over and, of course, a visit back to Stamford would not be complete without a local Red Kite.

So it was back to Lake Vinuela and I find that John and Jenny Wainwright have also ventured forth, despite the on-going heat and sun, with a visit to the Laguna Dulce.  Some interesting birds in John's report below along with a quintet of photographs.  Just a shame Jenny did not have time to get a shot of the family of three Otters that dashed out in front of them. 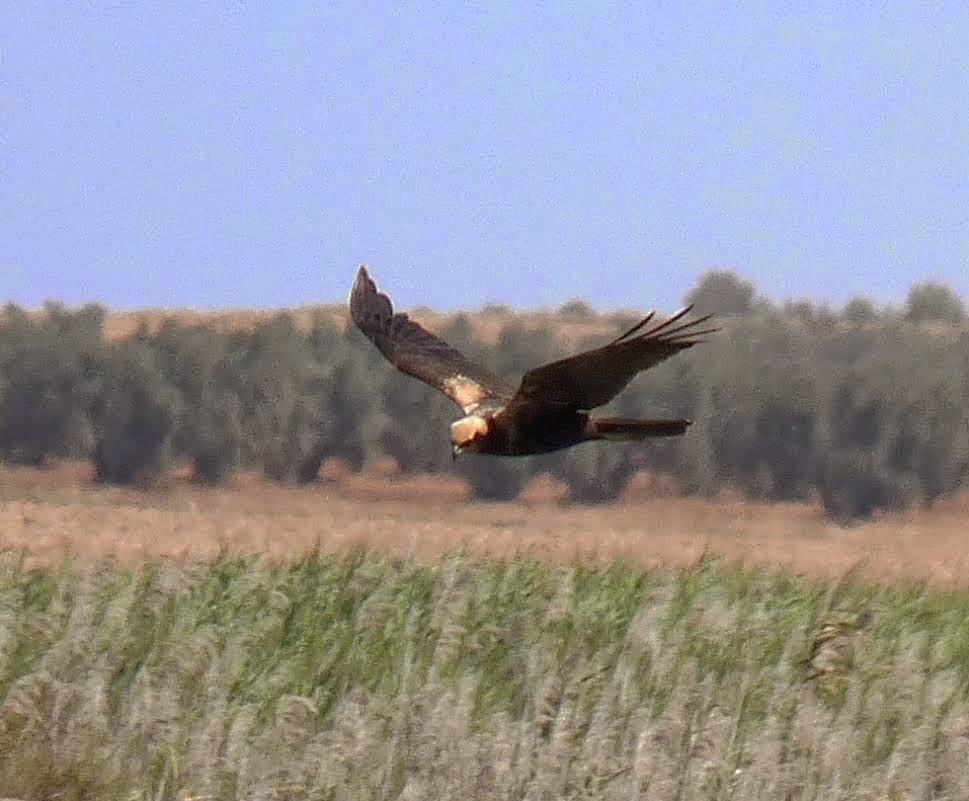 A hottish day, with a lovely breeze coming in off the water.

After shopping in Antequera, we grabbed a snack and headed for Laguna Dulce for a couple of hours.  Lots of hirundines over the fields on the way there (through Bobadilla village) and lots more as we approached and parked up opposite the hide.   These composed of Barn Swallows and House Martins with a good smattering of Common Swifts but only the one Red-rumped Swallow and one Sand Martin noted.

On the foreshore to our front, several Black-winged Stilts were seen as well as one Kentish Plover, whilst on the foreshore to the left of the hide another Kentish Plover along with two Common Sandpipers, a Wood Sandpiper, more Black-winged Stilts, Moorhens and a few Common Coots.  Two Grey Herons emerged from the large area of bushes in the water here, but took off virtually straight away - never to be seen again today.

On the laguna - quite spread out though - I counted over forty Greater Flamingos and also about were Common Pochard, Gadwell, Mallard, two Teal and good numbers of White-headed Ducks.  It wasn´t until about an hour into the visit that our first Marsh Harrier, a female, took to the skies over the far reed beds followed quickly by a juvenile.  I did notice that when the female Marsh flew over the reed beds all the waders, coots and ducks took off, but not in the case of the juvenile.  Still, this movement of waders did bring to our notice three Black-tailed Godwits, more Kentish Plovers, Common and Green Sandpipers and Black-winged Stilts.

As Jenny was watching the waders settle down, three Otters Lutra lutra ran across the shoreline and into the reeds.  I managed to see the back end of the last one.  We scanned the waters and reed over the far side but we never got another glimpse of them.  Large numbers of Black-necked, Little and Great Crested Grebes about and a small flock of Black-headed Gulls plus some Yellow-legged and three Lesser Black-backed Gulls.

In the reed beds across the front of the hide we saw Sardinian, Cetti´s and heard a Reed Warbler.  Great Tits were very vocal as were the Goldfinches.  A couple of flocks of House Sparrows were about and a small group of Corn Buntings and Serins were seen.
The female Marsh Harrier rose out of the reed beds clutching something in her talons, but I could not make out what it was.
A raptor was spotted over the ruin; this turned out to be a Short-toed Eagle but the bird gained the thermals and was quickly out of sight.


A Hoopoe flew across from the right of the hide and on a small skeletal tree in the water a juvenile Woodchat Shrike was seen.
Only one dragonfly (Red-veined Darter) and one Damselfly (Common Blue Damselfly) were seen today.  A  nice couple of hours visit - enhanced by the Otter sightings.

Check out the accompanying website at http://www.birdingaxarquia.weebly.com for the latest sightings, photographs and additional information.
Posted by Bob Wright - The Axarquia Birder at 07:15