Back to the UK at first light tomorrow so decided to pay a short, farewell visit to the local patch down at the Rio Velez in Torre del Mar.  Even as I left it was already hot and the temperature still rising in the clear blue sky and without a breath of air.  But I did pass the usual Thekla Larks on the way down the mountain and, as I drove through Trapiche, a lone Kestrel was resting, or he was just plain tired and exhausted in the morning heat, on top of a nearby pylon.

The riverside still looks quite lush with all the green vegetation growth but there is very little water upstream from the beach-side lagoon.  A couple of large, somewhat stagnant pools and just the occasional glimpse of water that actually looked fit to drink, for the birds and animals.  The bamboo has put on tremendous growth this year and, coupled with the riverside vegetation mentioned above, looking at the river has become impossible for long stretches of the walk down tot he pumping station.  The latter is where, no doubt at great public expense, a hide and facilities were erected less than twelve months ago.  Obviously, it would seem, the expense was in the provision and not the following maintenance.  The lovely wooden racks provided to encourage cyclists to dismount and make use of the hide to observe the local wildlife have gone.  Were they removed to be placed elsewhere or has some individual either done the same of taken them away as firewood?  The two wooden seats are still present , presumably because they are fixed to the concrete base, but one is now submerged in the growing vegetation.

And then there is the hide itself.  A typical three-sided hide (no back at the entrance side) with no glass in the windows and solid benches fixed to the floor you would think it would be safe from vandalism.  Yes and no.  Look through the window and you can see where very many visitors have simply thrown their empty paper and plastic bags along with tins and bottles.  Inside there is also paper on the floor and it is then that you realise that is tissues used to wipe backsides and on the seat itself two human faeces (I refrain from using the vernacular much as I am tempted) where the ignorant, inconsiderate user has used the bench as a toilet seat.  Even worse, the suspicious stains further on suggest that this is a regular practise.  Why do we bother to erect these facilities to see them so violently abused?  For we birders, in many ways the hide is in the wrong place and we would, in any case, have stopped here to look over the meadow, river and distant lagoon using the slight elevation to our advantage.  Now you will see why I spent far less time than I had intended at the river this morning.

But what about the birds themselves?  Again, probably due to the heat, there were far less than on my last visit.  I was welcomed by a single Collared Dove on the wires where on the last occasion I had seen a pair of Turtle Doves.  Down below me a Common Sandpiper foraged on the muddy edge of the water and so revealed the first Little Egret along with a handful of well-grown juvenile Mallards.  Even a lone Moorhen ventured out from the undergrowth.  Also in the trees were four bright green Monk Parakeets that had just arrived and at the tops of the same some of the resident Rock Doves.  As I prepared to walk down the track a White Wagtail walked across the green "slime" disturbing another Common Sandpiper and the first Little Ringed Plover of the morning.


Only limited opportunities to actually see the river as I walked down but there were a few more Little Ringed Plovers to be seen along with another Little Egret.  A small flock of Spotless Starlings were occupying the top of the next pylon and a couple of young Serin were feeding on the track in front of me.  Indeed, Serins were to be the birds of the morning for a soon as I reached the hide and could look out over the meadow family parties seemed to be everywhere, well outnumbering the few House Sparrows present.  Above me just the occasional visit from a Barn Swallow but then a family of Red-rumped Swallows decided that it was time to go off in search of food.  Whilst at the hide I also had a visit form both a Zitting Cisticola and a rather lovely juvenile Woodchat Shrike.


Very little to be seen on the lagoon save for a single Coot and a handful of Yellow-legged Gulls accompanied by a single Black-headed Gull.  A look through a gap at the river revealed both a male Blackbird and a feeding Blue-headed Wagtail whilst, a little further on, I came across one of the pair of Black-winged Stilts that had flown upstream from opposite the hide.  Occasional glimpses of the river did also produce more Little Ringed Plovers and Common Sandpipers along with a single Green Sandpiper.  A little further on and a pair of Spotted Flycatchers crossed the track in front of me to land on a bamboo fern revealing a youngster begging Mum for some food.   And that was just about it with a total of 26 species including the two seen on the way down to the Rio Velez.  Now it would seem I am on my way back to a wet Britain! 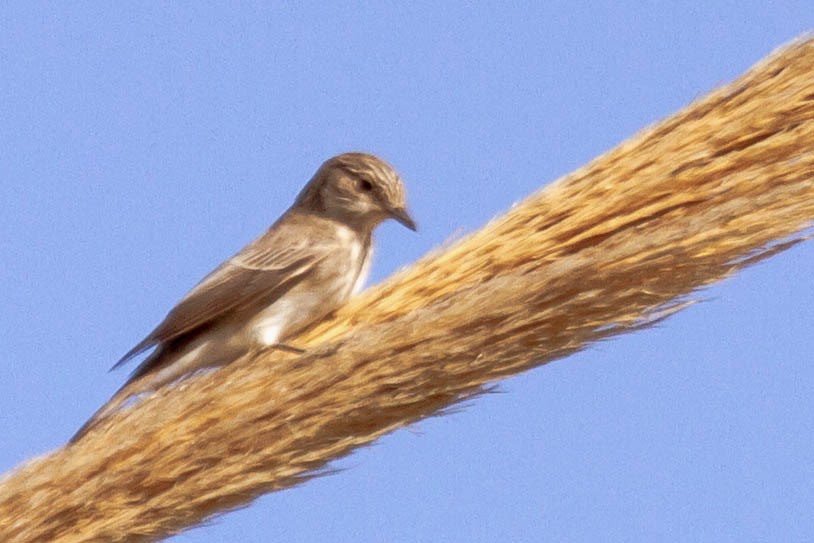 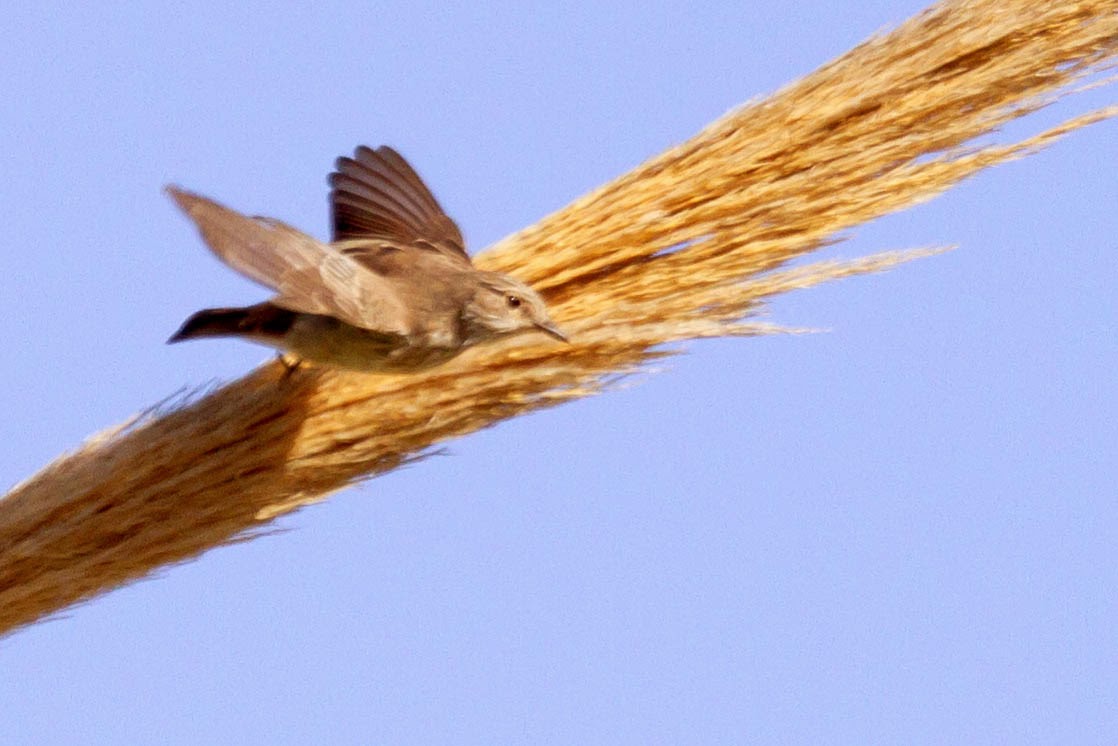 But, upon returning home and falling into the pool to cool off, I was soon be serenaded by the daily visit from the Bee-eaters with their weird screeching call and, this afternoon, it was the big yellow birds that became the main source of entertainment with at least six fly-pasts (and still counting) for a couple of the fire planes.  Lovely to both watch these planes picking up water form the lake and flying low within, probably, a few hundred metres but it, sadly, does mean that, somewhere, somebody is fighting a major fire to prevent loss of life and damage. 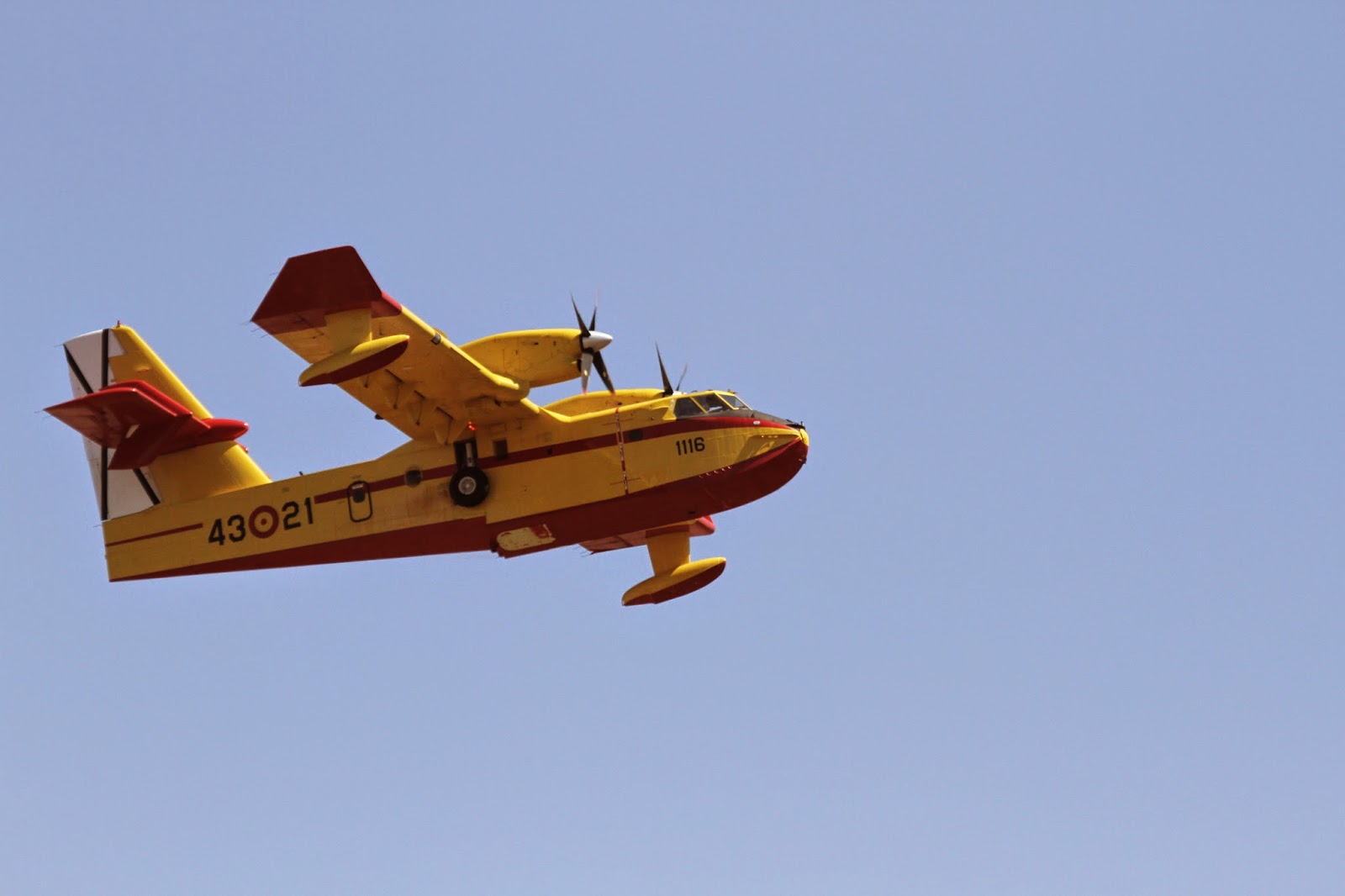 Check out the accompanying website at http://www.birdingaxarquia.weebly.com for the latest sightings, photographs and additional information.
Posted by Bob Wright - The Axarquia Birder at 08:47