Sirra Loja with John and Jenny

It looks as if Steve Powell and I (see later report) were not the only ones to take advantage of the last day of the month and get in a final morning's birding.  John and Jenny Wainwright ventured forth once more to tackle the Sierra Loja with a successful tally of birds.  No doubt, like most of us, they, too, will be hoping that September brings some cooler weather more encouraging to good birding; even a little rain to freshen up the ground and vegetation would be quite a blessing - but too much!  John's report follows.

A hot day although with breeze only 25C at top.

We started off from Salar about 9am and on the way out of the village we saw a Little Owl, lots of Collared Doves , Spotless Starlings and a few House Sparrows. After visiting the restaurant for coffee we headed up the track we saw the usual Collared Doves, four Blackbirds, Serins and more House Sparrows.

A couple of Wood Pigeons were the only thing seen until we reached the cliff areas, where a party of climbers were getting kitted out and a couple of dogs were running loose, so we carried on to the second cliff area where we saw Jackdaws, Stonechats and a Crested Lark.

Moving on and up to the old marble works, here we found a family of Thekla Larks, two separate families of Red-legged Partridges, a lone Southern Grey Shrike and as we entered the substation valley two rather bedraggled Woodchat Shrikes.  Lots of Northern Wheatears here with a few Black-eareds mixed in.  Three families of Stonechats as well as lots of juvenile Goldfinches.  A Little Owl was calling and it took us a while to locate him hidden behind a line of grasses, and as we left the valley a Blue Rock Thrush sat on a one of the many black and white signs that line the track.

Onwards to the ponds seeing more Northern Wheatears and a couple of Rock Bunting as we turned into the track leading to the ponds.  The lower one was very, very low, probably no more than half a metre in the centre.   There were a few Sharp-sided Newts coming up for air, and around the edges the odd Linnet and Rock Bunting were bathing.  The top pond being totally dry.


On and around the cliff face where we found Rock Sparrow, more Goldfinches and Linnets.  Above the cliff were House Martins, Sand Martins and a lone Barn Swallow.  I could hear Bee-eaters high up but it took a few moments to locate a flock of some 80 birds, but we lost them as they flew across the suns path.  A couple of Striped Graylings were about - albeit one decided to have a swim - also a Brimstone was noted here, plenty of little moths but moved too fast for me!!  An Iberian Wall Lizard was spotted by Jenny while we were looking over the new addition to the stone wall.
So then on to the fossil cave area where we picked up our first Crag Martins of the day followed by
Black Redstarts and more Rock Sparrows.  In the mouth of the cave a Hoopoe flew in to feed and
down in the meadows Jenny located our first and only Black Wheatear, as well as more Northern
and Black-eared Wheatears.  A group of five then a pair of Spanish Ibex hi-tailed it up the slopes as we passed.


Further on around and below the Sierra Gordo watchpoint a group of seven Griffon Vultures appeared and while we were watching them a juvenile Golden Eagle took off from one of the ledges and gave us great photo opportunities, which we naturally took.  More Crag Martins and a Common Kestrel came over the cliffs later and in the hawthorn bushes - which are well laden with berries - three Chaffinches and a flock of Corn Buntings were seen.  We parked up for a bite to eat and a few more of the earlier hirundines passed over including Common Swifts. 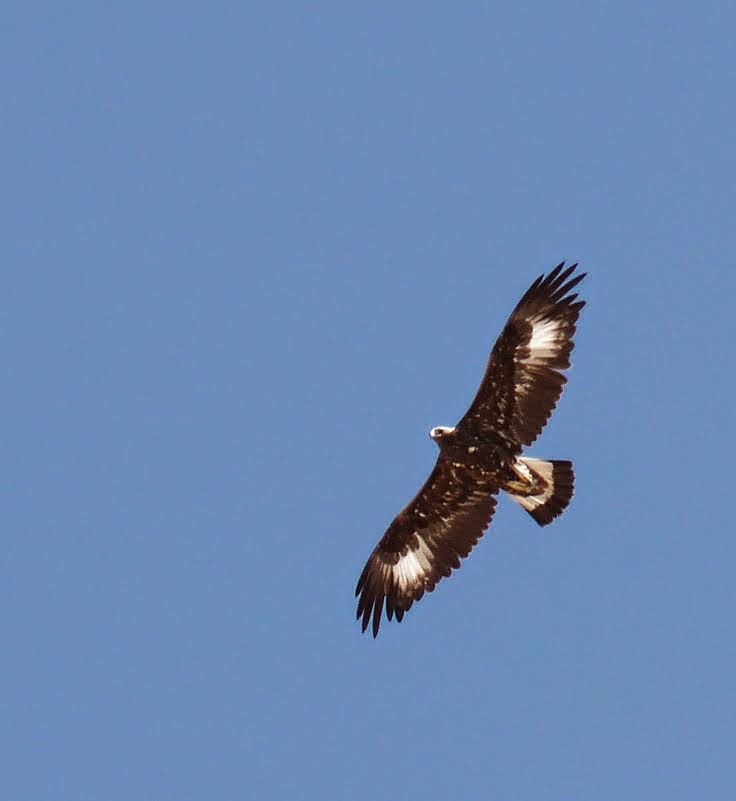 On the way down a Great Tit, Short-toed Treecreeper and Chaffinches were heard but not seen, and as we reached the bottom of the track a Spotted Flycatcher, Serins and House Sparrows took off from the bushes.

A nice finish to the month of August.

Check out the accompanying website at http://www.birdingaxarquia.weebly.com for the latest sightings, photographs and additional information.
Posted by Bob Wright - The Axarquia Birder at 23:24