Ventas de Zafarraya and the nearby Sierras

Today is the first of four days in which we have been promised rain and even lightening.  Overcast with a few breaks early on so I took the chance to drive up the mountain to the walk the old railway track at Ventas de Zafarraya before the onslaught.  Strange that because, on returning to the car and signs of bigger breaks in the clouds and it getting quite warm and sunny, I decided to press on via the "Magpie Woods" to take a look at the circular route on the other side of Zafarraya followed by a quick hop over to the pantaneta at Alhama de Granada and, finally, a drive down the mountain track through the Sierra Tejeda, stoping at both picnic sites, to Alcaucin before heading home.  Told Jenny I could be gone for maybe as little as an hour if it rained or, if not, maybe a couple of hours or so.  Still thinking about to explain away over five hours!  I even had time for a swim and, late afternoon, the rain has still not come.  Perhaps it was just a vicious rumour!

The usual Thekla Larks, House Sparrows, Stonechats going down the mountain where I passed through the Barn Swallows and on through Los Romanes to the lake and so on up the mountain to the pass at Ventas de Zafarray to walk the railway tack up and through the tunnel and on to the ruined track-side building before retracing my steps.  Greeted by more House Sparrows and Collared Doves, the first bird of interest was a distant Black Wheatear and then a rather scruffy looking Rock Bunting in a sate of moult.  From here on there were numerous sightings of small charms of Goldfinches including many juveniles still without their red blaze.  The first of a handful of Stonechats put in an appearance quickly followed by another, closer, Black Wheatear and then the first of many Blue Rock Thrushes seen on this walk.  As well as the Blue Rock Thrushes, I even had a male Blackbird flip past below me.  Meanwhile, having caught a short glimpse of a Peregrine Falcon swooping round the cliff face, I looked at an odd "lump" on the top of the cliff on the return walk and, jut to be sure, took a couple of very long distance shots.  Quite please to note on putting same on the computer that it was, indeed, a record shot of the, presumably, same Peregrine.  The only other bird recorded on the walk back was a single Crag Martin.  Where are all the others?  And no sign of a Chough anywhere.

Next it was to the "Muck Heap", nothing to be seen and then on through the Magpie Woods where, again, there was no sign of an Azure-winged magpie.  Turning left at the bottom I travelled out through the arable fields where I did find Spotless Starlings and a Thekla Lark along with a single Kestrel but nothing else other than a score of Wood Pigeons.  Then I took the left turn at the far end to complete a clockwise circuit of the sierras behind Zafarraya.  Not as many birds as I expected but I did come across two large flocks of Bee-eaters, one at each end, along with a Hoopoe and a pair of Common Magpies.  The other interesting discovery was the number of Northern Wheatears to be seen, a hunting Kestrel and, finally, a female Black Redstart.

Returning by road to, eventually, continue on my way to Alhama de Granada for a quick look at the pantaneta, I cam across a rather lovely juvenile Woodchat Shrike that remained long enough for me to get off a distant shot.  The water itself was relatively quiet with a couple of Little Grebes and a little more than a handful of both Common Coots and Common Pochards.  Over the water the hirundines feasted away and comprised mainly of Barn Swallows with a few House Martins.  But then I found at least half a dozen Red-rumped Swallows in the feeding hirundines.  Leafing the site, I stopped long enough at the start of the gorge walk to look into the drainage channel and found a couple of Grey Wagtails.

The journey back to Ventas de Zafarraya duly produced a trio of Azure-winged Magpies and on taking the mountain track down to Alcaucin the upper picnic site had good numbers of Crossbills present with a small family of Serins nearby.  The lower picnic area eventually produced a handful of Crossbills in the usual Eucalyptus tree and then they were joined by a very yellow member - but appearing somewhat smaller.  No scope so a photograph was taken to help me when I got back home.  Have a look at the "mystery" photograph where you can compare the sizes but it does not represent the very yellow of the smaller bird.  Me thinks it must be a Melodious Warbler gone high to see what the other birds were doing in the top of the tree!  Then it was off home collecting a Chaffinch on the way. 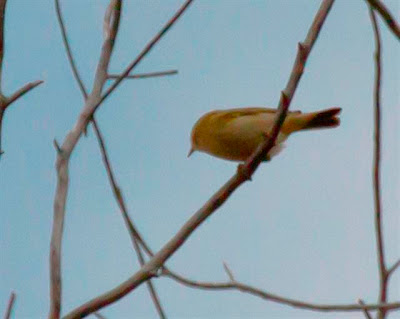 Check out the accompanying website at http://www.birdingaxarquia.weebly.com for the latest sightings, photographs and additional information.
Posted by Bob Wright - The Axarquia Birder at 12:18