Really running out of time now as I try and find that elusive new species that will take my annual Spanish total to the magic (for me) 250 mark.  Yesterday I was up early and off in the dark so that I arrived, still with headlights on, in the fields above the Cacin valley in the hope of finding a Black-bellied Sandgrouse.  An hour spent in the cold morning searching without vain so that was one target bird missed.  Strange, and a first, when you think that the first bird seen during the day as a Southern Grey Shrike and I was see at least three others before returning home including the afternoon sighting up on the Sierra Loja.  I set out with four potential birds that might take me to the 250 mark; Brambling on fields near Huetor Tajar and, just maybe, a Redwing or Fieldfare up on top of the Sierra Loja.  I had been warned by Mick Richardson that whilst the local weather was turning much colder it was still probably not cold enough to bring in a possible wintering jack Snipe and he proved to be quite right.  Similarly, no Bramblings which was not surprising given the fact that there were also very few Chaffinches about and up on the Sierra Loja the berry harvest seemed to have been exhausted much earlier than last year so the only thrushes seen were an in individual male Blackbird and a Mistle Thrush.  That leaves a week to find any of the above plus a Hawfinch (no luck at Arroyo Marin last Sunday), a Tufted Duck (Where is there any fresh water?) or even a possible Common Scoter off the coast.


But there were other birds to be seen.  Apart form the early Southern Grey Shrike, the field area produced a small charm of Goldfinches and White Wagtails along with a Greenfinch, Kestrel basking in the early morning sunshine and a Hoopoe.  As I left the area not only did I pick up Crested Lark, Wood Pigeon and Collared Doves but also a good number of Jackdaws mixing with a lock of at least 50 Common Starlings, making a mockery of the handful of Spotless Starlings seen just round the corner! 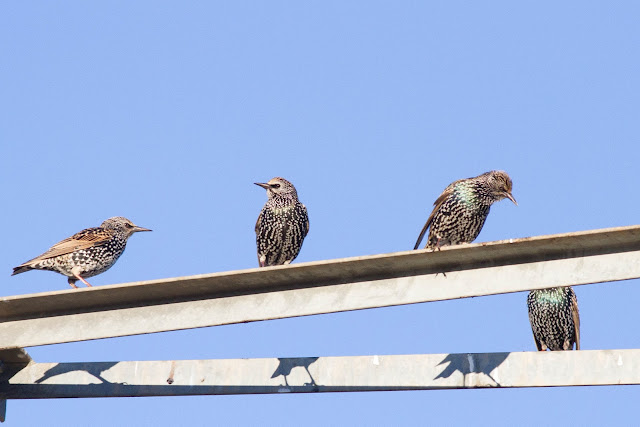 Then it was on to Huertor Tajar and a walk along the path at the far side of the town.  No sooner had I started and I almost tripped over the very close Bluethroat.  Again, this was to be the first of a quintet seen in the next hour or so but, as so often happens, I was carrying the tripod and scope rather than the camera.  No shortage of Black Redstarts, White Wagtails, House Sparrows and Stonechats but then I started to pick up a wider selection including a rather lovely Grey Wagtail, a single Meadow Pipit, the first of the Lapwings and a small flock of Tree Sparrows.  Onwards and then able to scope the wintering Stone Curlews who seemed to be lined up against a black water pipe.  One long line of Stone Curlews having a morning nap and it did strike me as if they were keeping themselves warm as the sun heated the, presumably, water in said pipe.  I estimated, including the sleeping birds on the sandy soil, to be about two hundred individuals present.

A drive around the area produced a large flock of Lapwings and in the river a single Snipe along with yet another Bluethroat along with Chiffchaffs and Blackbirds.  A Cetti's Warbler was calling from cover and a walk to check out last year's Jack Snipe habitat found another Bluethroat and a Kingfisher at the small pool.  The final port of call was the Cacin river site which produced numerous Chiffchaffs, White Wagtails and then both a number of Meadow Pipits and fewer Water Pipits.  A number of Azure-winged Magpies were feeding in the area and Blackcaps and Sardinian Warblers were in the trees and hedges at the far end followed by a couple of Chaffinches as I searched in vain for the unsettled Little Bustards.  I ended up taking another look at the Stone Curlews form the opposite side and not the best for photographs given the sun's position.

With the only chance of reaching the magic 250 being the wintering thrushes I made my way up the Sierra Loja with just the two stops; one to check out the main quarry where was still no sign of the breeding Eagle Owl (another species that I have missed this year) and then for a break fr lunch at the Charco del Negro.  All very quiet here as the mountain in general as apart from the Little Owl as I approached the electricity sub-station.  It took a long time to find the first Red-legged Partridge and at the top the only thrushes to be seen were, as reported earlier, the single Blackbird and Mistle Thrush.  I did find ore Stonechats and Black Redstarts and it was lovely to have a handful of Rock Buntings posing in the bush top to my left.  On the other hand, I did add a single Black Wheatear and a handful of Rock Sparrows to the day's list which just managed to reach the forty mark.  Finally, as the sun decided it was time to think about easing back for another day, a rather obliging Southern Grey Shrike posed, it seemed, indefinitely to my left enabling to take a few photographs. 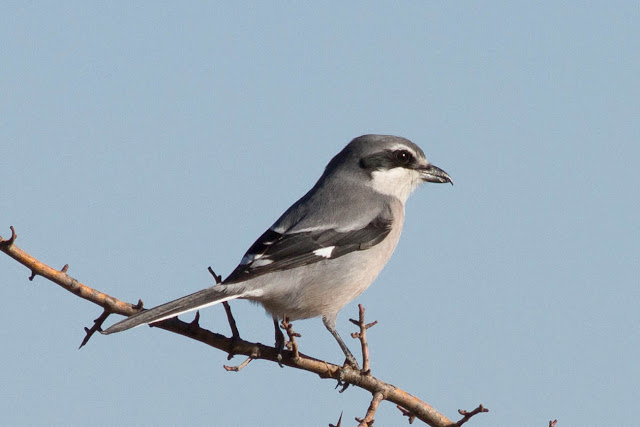 Check out the accompanying website at http://www.birdingaxarquia.weebly.com for the latest sightings, photographs and additional information.
Posted by Bob Wright - The Axarquia Birder at 08:26