Whether it was the thought of Lesser Crested Terns at Los Lances or the possibility of catching up with the visiting lesser Spotted Eagle at La Janda whilst the dry weather continued I do not know but certainly Derek and Barbara Etherton decided to make the most of the opportunity and took themselves off down to Cadiz Province on Sunday rather than stay at home and enjoy the holiday-making Spaniards as they enjoyed Constitution day.  They even managed to get a room at their favourite hotel and then enjoyed a second visit to La Janda on Monday morning having enjoyed the birds of Barbate on the Sunday.  And judging by Derek's report that follows they certainly had some very good birds if not the two I identified above.  Bur then again, who can argue against half a century of Stone Curlews, hundreds of Cranes, loads of Common Kestrels and those delightful Marsh and Hen Harriers found at La Janda?  All the photographs are by and courtesy of Derek Etherton


Leaving early on Sunday we clocked up Little Owl, Buzzard, Common Kestrel, Blackbird, White Wagtail & Sparrowhawk whilst travelling on the motorway.  First stop was at Apollo 11 for coffee before heading to Barbate, a favourite place for us.  A handful of Auduoin's Gulls were joined by a single Yellow Legged, plenty of Sanderling, Ringed Plover and Kentish Plover were busy feeding, mixed among them were Redshank and Black Winged Stilt.  A couple of Cormorants lurked with Grey Heron across the first pool along with a solitary Greenshank.  Crag Martins, Meadow pipits, Spotless Starlings, House & Spanish Sparrows joined Crested & Lesser Short Toed Larks feeding on the ground.

Moving up a little Mallard, Little and Cattle Egret, a group of 6 Spoonbill were spied and panning the 'scope round a Kingfisher was found.  A little further up the Stone Curlews were located closer to the bank than normal, and in greater numbers, 53 counted by us bur probably more camouflaged.  On the waters edge a couple of Grey Plovers and a single Curlew Sandpiper were in the same 'scope view as the Stone Curlews.  A distance away a couple of Griffon Vultures were wheeling around and then, from nowhere, an Osprey appeared, but stayed down the far end from us. 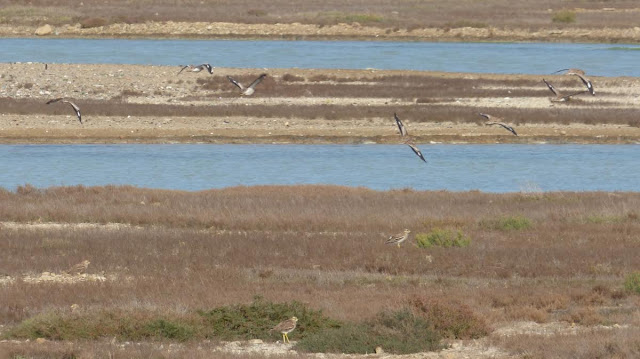 Lunching half way along the track we were to view a solo Barn Swallow, Linnets, Serins, Goldfinches and a Sardinian Warbler, the Corn Bunting turned up later.  Of course several Stonechats were posing in their normal manner.

Very little new was to be spied at the top end except for Calandra Larks in the nearby fields and so we drove back down to move onto the bridge area.  En route back down a Raven and a couple of Lesser Black Backed Gulls had arrived along with 3 Bald Ibis.  Deciding to go via the horse and cow fields on the way back to the road we counted a total of 9 of this 'ugly' bird - well their mothers must love them.

At bridge area we added Curlew, a smashing Marsh Sandpiper and some more Grey Plovers, other than that it was just more Kentish and Ringed Plovers.

So around to La Janda and driving in the 'back' way.  Plenty of Marsh Harriers, male & female, hundreds of Common Crane, more Corn Buntings and Stonechats.  Dozens, yes dozens, of Common Kestrel and of course White Storks.  It took a good hour to record our first Hen Harrier, female, and even longer for a male.  No sign of a Black Winged [or shouldered if you like] Kite but plenty of Egrets, Cattle, Little and a couple of Great White.  Both Pheasant & Red Legged Partridge were on the track, some Zitting Cisticolas braved the windy conditions. A Robin viewed and 'ticked' at us whilst we watched Jackdaws and Wood Pigeons.

Driving out past the rice field stubble we saw several more Harriers, countless White Storks, Cranes, Cattle Egrets and Grey Herons, but the funniest was watching, by accident, some Purple Swamphens with their bottoms and legs up and busy feeding in the stubble.

So back to the hotel to be greeted with a Tawny Owl calling outside our room.

Day 2 dawned and our plan after breakfast was to bird La Janda the normal way and exit at Benalup, travel the A2226 to the Jerez - Algeciras road.  But first of all we called into Los Lances to see what was about. Auduoin's Gulls, Sandwich Terns, a solitary Greater Flamingo and a Curlew were close to the hide.  Many Sanderling and Ringed Plover scampered about and another Grey Plover lurked in the reeds in front of the hide.  Each side of the boardwalk had Goldfinch, House and the odd Spanish Sparrow.  Meadow pipits, Crested Larks and Chiffchaffs were plenty.

Driving on to La Janda they were busy ploughing the field to the left of the track, much to the delight of several hundred Cattle Egret following the tractor and the many, literally hundreds of Sparrows mainly Spanish, the Serins, Corn Buntings and Linnets were also not to be outdone.  A little further down Jackdaws, Lapwings, White Storks and Common Cranes kept a little distance from the ploughing activity.  A couple of Common Buzzards were noticeable engaged in arguments with Marsh Harriers.  Most of yesterdays birds were present but we managed to add a single Green Sandpiper, and a close Marsh Sandpiper amongst the draining fields. Past the 'smelly' farm with the usual close by Red Legged Partridge and Pheasant we viewed a male & female Hen harrier busy searching the fields.  Further on past the farm 2 Little Owls were found a fair distance from the track but looking stunning in the morning sunlight.   Even further on we found the first of 2 Black Winged Kites that performed for us, even managing a distant photo of one.  Plenty of Common Kestrels here along with more Jackdaws, a single Raven and Moorhens in the wet fields.  The little water on the left produced Purple Swamphen and Spoonbills and an odd Coot.

I forgot the lovely view of the Water Pipit at Barbate, I'll put it down to being age related!

Sounds like a fabulous week-end and then back home in time to find all the shops shut on the morrow and the day looking more like a Sunday as the local bank holiday continued!


Check out the accompanying website at http://www.birdingaxarquia.weebly.com for the latest sightings, photographs and additional information.
Posted by Bob Wright - The Axarquia Birder at 02:05