On airport duty so unable to attend this month's Andalucia Bird Society field visit to the Serrania de Ronda but was able to meet up with members afterwards when I attended the committee meeting in Juancar, the "Blue Village" in the middle of no-where. 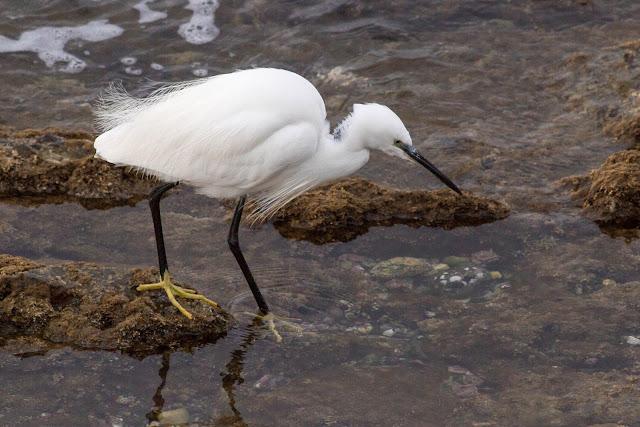 Having dropped my son off at Malaga for his return flight to Bristol I made my way, passing a Cormorant flying into the Guadalhorce, to the Parador in the hope of seeing the one remaining Superb Starling named "Pepe" by the locals.  White Wagtails, Monk Parakeets, Collared Doves and Spotless Starlings but no Pepe.  I later learnt that he died back in July so our only site, as far as I know, in Europe to see this beautiful bird is now gone.  Carrying on along the coast my next stop was the lighthouse at Fuengirola where, all being well, I might pick up the Purple Sandpiper.  Again, out of luck but this time I added about a dozen Turnstones, a handful of Sanderling, single Black Redstart and Ringed Plover and a very small flock of Serin.  There was also a single Little Egret feeding in the shallows and a trio of Audouin's Gulls resting on a large rock just off the shore.  Out at sea, but relatively close to the shoreline, both a Lesser Black-backed Gull and adult Gannet passed eastwards.


My final stop was up in the mountains above Ojen at the Refugio de  Jaunar where I hopped to find my third target bird of the day, the Bullfinch.  Again, much searching during which I saw Blackbird, Robin and Great Tit but the Bullfinch was proving most elusive until I heard two individuals whilst walking the valley trail.  The only thing I can say is that one out of three is better than none out of three - just!

Passing a Raven as I climbed higher and higher and then, just a couple of kilometres away from my destination at Juancar, I cam across a few of the members checking out a high peak and neighbouring fields where, I too, recorded Griffon Vulture, Chiffchaff, Stonechat, Choughs and Thekla Lark, before continuing onwards to the village where I also picked up a Blue Tit and , needless to say, a number of House Sparrows.  On the other hand, not best pleased to hear that during the morning the group had found Brambling, Hawfinch, Redwing and Fieldfare, all four of which could have been added to my year list!

Check out the accompanying website at http://www.birdingaxarquia.weebly.com for the latest sightings, photographs and additional information.
Posted by Bob Wright - The Axarquia Birder at 22:29