Not particularly early arriving at the Rio Velez on the western outskirts of Torre del Mar and parking in my usual place below the road bridge at the start of the track down to the sea.  As usual, greeted by both the resident Rock Doves and Moorhens along with numerous Goldfinches and Chiffchaffs hopping around the larger trees.  Then a meet with Nigel Smith, a long-distant member of the Axarquia Bird Group from Barnsley (and avid Sheffield United supported.  Well, someone has to show some pity for the poor old "Blades.") and presently holidaying in Nerja till the end of the week.  On his way home having arrived by day break, Nigel had recorded loads of Mediterranean Gull, the departure of the Cattle Egret roost and even seen a Wryneck, Kingfisher and Hoopoe so he was well-pleased.  Whilst we had a short chat a flock of about 80 Sky Larks was wheeling above the field being ploughed and more Chiffchaffs were busy feeding in he track-side hedges and bushes.  t the same time there was a constant calling from the local Cetti's Warblers and the first of a few Zitting Cisticolas flew over the track.

And on the field to my left just the one, solitary Cattle Egret.  Amazing given that there were at least 200 roosting in the nearby reed-beds overnight.  Perhaps it brings to mind the alternative saying that it is the late bird that catches the worm!  Obviously, this chappy had had a lie-in recovering from a bad hang-over (New Year come early) or a night on the tiles and was the last to get up and get away and, in so doing, discovered the tractor ploughing the nearby field to reveal all sorts of edible goodies!

Departures made I carried on down tot he hide with its now restricted view but at least, unlike my last visit, I could actually see something of the river.  All that I saw from the hide were a number of Serins,Goldfinches and a Stonechat.  So back to the car with, now, the sun behind me and I managed to find a pair of skulking Mallards.  Then it was back to the hide in the car so that I could walk down to the beach.  Fortunately, not too many people about and I was able to pick up a Heron, Little Egret and a handful of Coots.  A number of White Wagtails and Moorhens were feeding/foraging around the rubbish deposited in the middle of the lagoon with a single Little Grebe just beyond and on the beach a single Sanderling and Kentish Plover.  Out at sea, resting on the calm waters, a number of Mediterranean, Yellow-legged and Lesser Black-backed Gulls.

Making my way back to the hide I then recorded the only Monk Parakeet of the morning and spent no inconsiderable time scoping the distant feeding Crag Martins in the hope that I,too, might find the individual Barn Swallow previously seen by Nigel.  No such luck.  More Serins, Goldfinches, a Robin and House Sparrow plus very handsome male Back Redstart.  Also, well concealed in the vegetation nearer the river, at least a score or more of Mallards were taking their rest.

Rather than drive straight back to Mezquitilla, I diverted under the bridge and lightly upstream to check out the clearer water.  Sitting quietly in the car under the trees I was able to watch the flock of bathing Spotless Starlings and then realised that they had been joined by a couple of their Norther or Common Starling cousins, obviously down here rather than be anywhere near the storms and tempests of north-west England!  Plenty of feeding White Wagtails near the water and Chiffchaffs in the trees immediately in front of me.  It was whilst watching the latter that I managed to see the Wryneck but, sadly, it just would not come out from the far side of the leaf-strewn branches.  Similarly, whist watching the Starlings of both varieties I saw the Green Sandpiper dash upstream and then reappear and wait to be photographed.  Also present was a single Meadow Pipit and a quartet of Sanderling who had obviously decide that this was to be the stretch of rive on which they would feed until further notice.  Another male Black Redstart before finally heading off home. 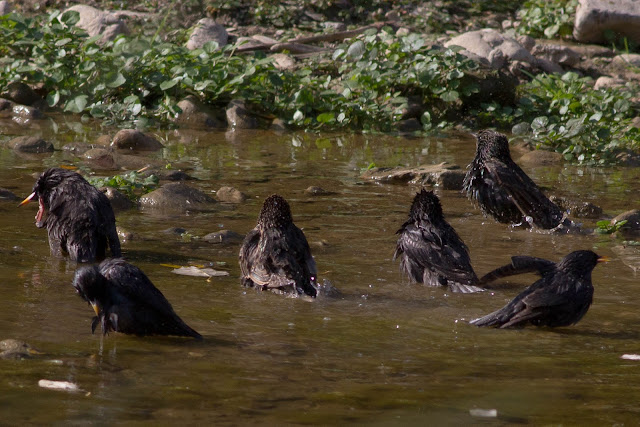 Check out the accompanying website at http://www.birdingaxarquia.weebly.com for the latest sightings, photographs and additional information.
Posted by Bob Wright - The Axarquia Birder at 08:11