The last meeting of the year for the Axarquia Bird Group and just the nine of us at Fuente de Piedra in search of the wintering Cranes.  A lovely calm and sunny day, somewhat cool when we met in the Visitors car park  at 9.30 but becoming increasingly warmer as the morning progressed.  I have never seen Fuente as dry as it was today and, other than the barely damp area on the main laguna (as was!) and just one very small, shallow area of water which held the 200+ Flamingos, one could have been forgiven for thinking that we were visiting the "Badlands" of Arizona so dry and barren looked the site. But despite the arid conditions we managed to record almost 50 species before most of us retired to the village for a (disappointing) menu del dia - and even then he had a White Stork drift immediately overhead as we sat outside n our shirts sleeves, just a week short of Christmas Day. 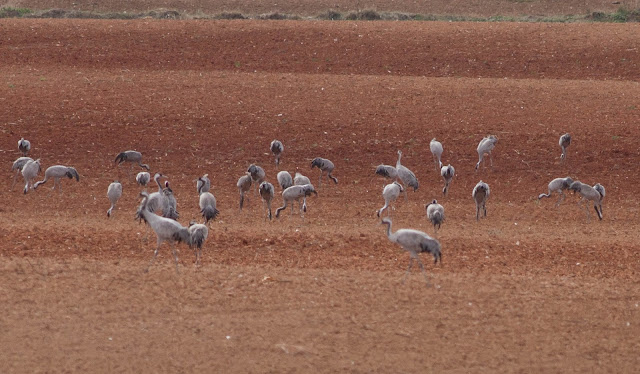 Arriving with Jenny, and putting up a Hoopoe that was feeding alongside the entrance road, just after Mick Richardson we were immediately greeted by an overflying Raven whilst on the field housing the "Kestrel Tower" a large roost of Lesser Black-backed Gulls was observed along with the feeding Jackdaws and Lapwings. Soon we were joined by both Marcus and Liz Rootes along with Steve and Elena Powell and we made our way up to the mirador in front of the Visitors Centre where we had the exposed dry expanse of nothing in front of us.  As stated above, the Flamingos were on a large group to the left and also nearby a similar number of Black-headed Gulls.  Also present just a few Mallard and a dozen or so Shelduck making the most of what little water was present. Below us the constant movement of a few passerines including Robin, Sardinian Warbler and Blackcap plus the first of the Black Restarts and Stonechats.  Chiffchaffs above us in the trees and just the suspicion that there might even have also been a Firecrest and then Jenny returned form her wander round the back having found both Goldfinches and Serins. 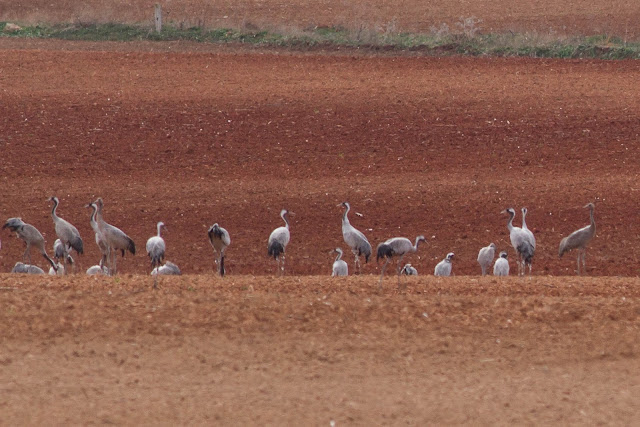 Both the latter were found as we made our way round to the laguneta having now been joined by Eric and Pat Lyon and here we did find a good depth of water with the accompanying Little Grebes, Mallards, Shovelers, Pochards and Teal.  Even a couple of Snipe feeding at the edge of the largest island and a number of Coots and Moorhens.  Above and around us the constant movement of Jackdaws, Spotless Starlings and the local Rock Doves.

Walking back along the lower level and over the causeway before reaching our cars we recorded numerous Blackbird, Greenfinches, Corn Buntings and White Wagtails along with more Black Redstarts and Stonechats.  Cetti's Warblers had been heard so we were now ready to start our circuit of the laguna.  In addition, we also managed to find a pair of Great Tits and Spanish Sparrows and whereas Mick and a couple also managed to see the only Marsh Harrier of the morning, most of us pondered over the pair of very distant resting large raptors that were almost certainly Golden Eagles rather than Spanish Imperials. 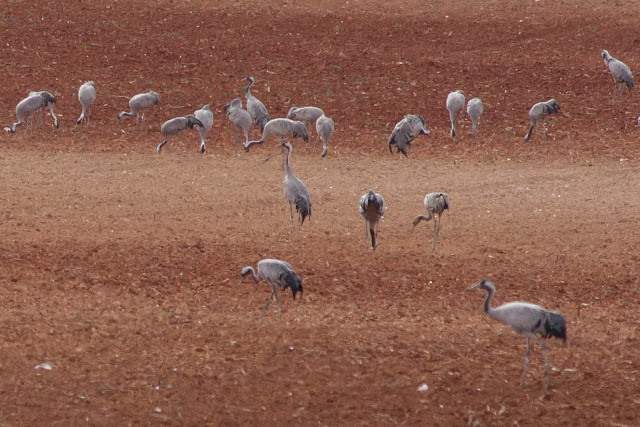 Both a Kestrel and a handful of Red-legged Partridges before stopping just short of the Mirador de Cantarrannas produced a rather lovely Black-shouldered Kite and a Buzzard.  Not just a few Thekla Larks in the field to our right but a flypast of a small flock of Sky Larks which had left a handful of Calandra Larks behind them on the other side of the road.  The stop to look out from the mirador itself only served to confirm how arid was the laguna albeit the sun on the damp area did produce a most beautiful reflection of Fuente de Piedra.  And then , to the far right,the sight of our first Cranes as a flight of about a dozen birds could just be made out in the far distance.  So where were the Cranes?

Moving on to the back of the laguna we certainly found our target birds with at least 800 individual Cranes feeding on the harrowed fields to our right.  What a magnificent sight, especially when individuals took to the air; always a wonderful sight.

And so on round to complete the circuit but without finding any Stone Curlews.  We did have more Corn Buntings, Black Redstarts and a second Black-shouldered Kite along with Thekla Larks and a Kestrel.  A single Cormorant flew away from us and, as already mentioned, we finished the day with the White Stork flying over the village itself.  What a lovely day day with lovely company and a very peaceful Christmas and a happy and healthy New Year to all the members of the Axarquia Bird Group and readers.

Check out the accompanying website at http://www.birdingaxarquia.weebly.com for the latest sightings, photographs and additional information.
Posted by Bob Wright - The Axarquia Birder at 07:55