Meeting in Tarifa for the monthly filed visit with the intention of watching raptors passing overhead. I should have known there might be a slight problem when the wind picked up late yesterday afternoon and the skies clouded over.  Only the half of it as we awoke to overcast skies following a little rain during the night near Tarifa and very strong winds.  By the time we reached the agreed meeting point the weather had improved with broken cloud and the sun poking through but still very windy.  No real point in standing around at the raptor viewing points so the group split into two with six cars (20 members) following Derick off round the back of the sierras and on to Benalup and La Janda whilst I took thirteen members in four cars direct to La Janda and then on to Barbate.  Whilst the weather continued to improve and become very hot with the clear blue skies and overhead sunshine, the very strong winds continued all day which was most disappointing as it resulted in many of the smaller birds that we would have expected to see remaining within the shelter of whatever vegetation they could find.  Nevertheless, by the end of the day we had recorded 51 species including nine raptors.

No sooner had we left Tarifa than we had our first Stonechat and then numerous Cattle Egrets on the way tho the entrance track down into the rice fields of La Janda.  Stopping at the top of the track we could see numerous White Storks below and in the air and our first of very many Marsh Harrier sightings.  before reaching the canal at the bottom of the track we ad also added Collared Dove, House Sparrow and a Corn Bunting - despite the strong winds.

once at the bottom we had some close views of up to four Glossy Ibis and a small flock of (Blue-headed) Yellow Wagtails were foraging at the feet of the cows in the holding pen opposite.  Little Egrets could be seen whilst a Short-toed Eagle hovered overhead and a Reed Warbler called from the river bank.  Moving along the track we had many sightings of both Little Egret and Grey Heron whilst Barn Swallows fed over the neighbouring fields but were, perhaps, surprised to see the pair of Cormorants.

No shortage of Marsh Harriers all morning but just the occasional Common Kestrel and, approaching the bridge up to the "smelly farm," our first real glimpse of the large charms of Goldfinches with many accompanying House Sparrows.  It was here that we also encountered the large number of Wood Pigeons and then, just after crossing the bridge, Terry and company managed to see our only Black-shouldered Kite of the day, this coming soon after we had all enjoyed very clear views of a female Montagu's Harrier.

The next section up to and just beyond the farm produced not only both Red-legged Partridge and Pheasant but a group of magnificent raptors including a splendid immature Golden Eagle, a number of Black Kites, a couple of Booted Eagles and a splendid Short-toed Eagle also immediately overhead.  Add then the handful of Alpine Swifts and a female Norther Wheatear and we were most pleased.  As expected, there was certainly no shortage of either Rock Doves or Jackdaws at the farm itself. 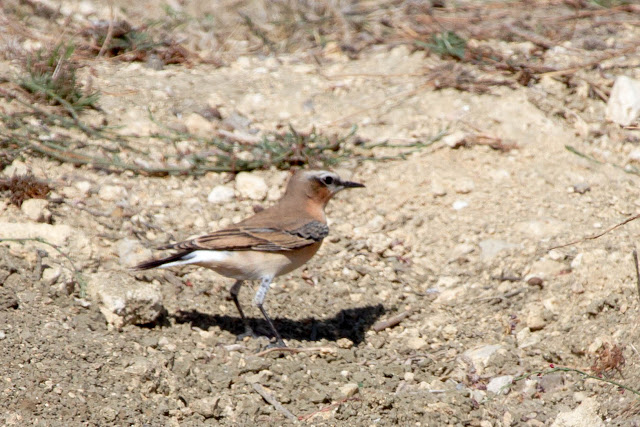 Time to move on to Barbate and the river mouth was relatively quiet as the tide was well out by now but we did find a lone female Curlew.  Inland from the main road just the odd wader including both Sanderling, Kentish Plover and Ringed Plover along with a Black-headed Gull.

Driving on round to the back of the waters the settling pools produced a number of birds including Flamingoes, Grey Herons and Little Egrets.  The Audouin's, Lesser Black-backed and Yellow-legged Gulls were all at the far end along with at least nine Spoonbills.  Also seen at the water's edges as we moved along were Black-winged Stilt, Redshank and a Marsh Sandpiper.  The track itself held a few visible Whinchats and a couple of Northern Wheatears.  Apart from the regular appearance of feeding Barn Swallows we also picked up a handful of Common Swifts.  Leaving the site to make our way back to Tarifa we managed to also add a number of Spotless Starlings resting on the wires overhead.  All in all, a very enjoyable day in pleasant company despite the very unfavourable wind. 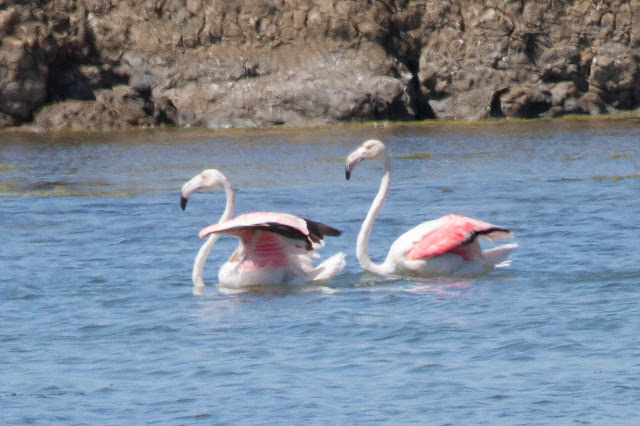 Birds seen during the two days:


Check out the accompanying website at http://www.birdingaxarquia.weebly.com for the latest sightings, photographs and additional information.
Posted by Bob Wright - The Axarquia Birder at 08:57