Friday 4 September
Looks like I was not the only local bird out in the field this week as can be seen from the email report I have just received from Derek Etherton.  It must be having such a magnificent recorder and spotter in Barbara that lets Derek see all these marvellous birds, a wife beyond birding value.  Now praise such as that should be worth a glass of beer when I arrive at their lovely home on Tuesday!!!


We've also had a couple of trips this week.  Tuesday saw us meeting Mick Smith and recently returned Jerry Laycock at the church in Guadalmar at 0730hrs.  A good day birding with a cool start, but getting pretty warm by 1330hrs when we finished.  A plethora of Kingfishers, 6 in total on different lagunas, made good viewing.  We recorded a grand total of 61 species including, Great Egret, Bar Tailed Godwit, Greenshank, Curlew Sandpipers, Bee-eaters, Black Kite, Sanderling, Dunlin, Avocet, Snipe,  Audoin's, Med and Black Headed Gulls, Little and Sandwich Terns plus Greater Flamingo [on the beach].  We had actually recorded 59 as we walked back over the bridge to return for the cars.  Desperate for a 60 list a search of the scrub between the newly reformed track and the river produced a fine Olivacious Warbler, so 60 it was, but then a Blue Tit by the church made the number odd!

Today, Friday, Barbara and I headed down to Zapata and what a difference a week makes!  Chilly enough at 0645hrs for a light fleece with the feel of Autumn in the air.  Not a Nightjar in sight, first time since they arrived in May and no Iberian Hares either.  No Barn Owl , but that's not too unexpected, it keeps itself very elusive!  Grey and Night Herons were feeding just up from the ford and a Little Bittern became visible as the sky lightened.  Early Common Swift were soon joined by Red-rumped and Barn Swallows plus a few House Martins.  Common Sandpipers and Little Ringed Plovers fed by the ford and the Kingfisher was, as usual, busy feeding.  Heading back to the reed ditch things started to come alive with a mix of Finches, Common Waxbills [100's] heading out to feed.  Short-toed Larks, Blackbirds, Zitting Cisticolas appeared as did a couple of Yellow Wagtails, not so many  as a week ago suggesting many had left on their winter travels.  A fine Northern Wheatear was feeding in the enclosed field. The roosting flock of Cattle Egret is now getting very large and three figure numbers were emerging from further down the reed beds.

Looking upwards a solo Black Kite passed low overhead, a few Honey Buzzards rose from the riverside trees and an Osprey was viewed heading away following the river upstream.  Returning in the now daylight to the ford area we parked and walked.  Pretty quiet compared to seven days ago but a delight was watching four Little Terns hungrily feeding in the shallow river seeming not to care about us.  I tried to photograph them, ha ha, have you ever tried!!  Returning to the car several Linnets, Green and Goldfinches were buzzing around.  Cetti's Warblers were very active, they seem to get a second wind this time of year!  Driving back up the track a large number of Bee-eaters were gathering in a tree, ready for take off I guess.

So back home via Mercadona and then breakfast.

Great birding by Derek and friends and makes me wonder why we bother to spend hours getting down to Tarifa.  More low flying Honey Buzzards seen here than there!  But it will not top us all making the trek south-west in a couple of week's time.

PS:  Yes, I do have some Little Tern photos, see below! 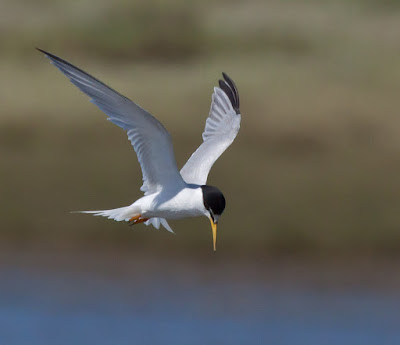 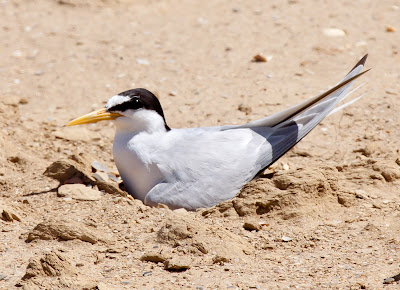 Posted by Bob Wright - The Axarquia Birder at 07:43