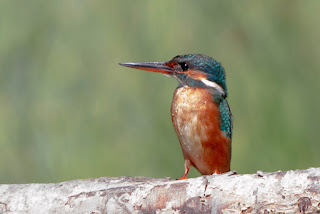 What a beautiful clear and sunny morning for a visit to the Charca de Suarez reserve along with Steve and Elena Powell which saw us arrive a little later than usual as we made our usual slight detour to take in "Turtle Dove Alley" (but none present on either the inward or outward drive) where we duly recorded a number of "flitting" Red Avadavats within minutes along with Zitting Cisticolas, Greenfinches and the usual House sparrows and Collared Doves.  Then it was on round the corner to the reserve itself where we were welcome by numerous calling Cetti's Warblers.

First up, as per the last few visits, was a bee-line to the Laguna del Taraje where we did not find the Little Bittern, although it had been previous seen within the past thirty minutes, but managed a single Gadwall, Little Grebe, and a Purple Swamphen that had been watching the week-end broadcast of "Strictly Come Dancing" and was anxious to prove that anything a D-Class celebrity could do, he could do better!  Mind you, we did return to this water after completing our clockwise circuit and duly picked up a Little Bittern along with another Purple Swamphen.

Just the one Blackbird as we made our way to the new hide overlooking the now maturing new scrape of Laguna del Almo Blanco which is quickly becoming a popular destination.  Nevermind the mallards and a the lingering Greenshank at the very back, we had a pair of Snipe, a couple of White Wagtails and a single Black-winged Stilt wandering around the back of the reeds.  These reeds seem to be a fascinating centre of attention for the local Red Avadavat population which were continually buzzing around like demented witches.  The only trouble being that when they did stop they dived straight in to the reeds leaving you scratching your head in frustration as you glimpsed the occasional red shadow amongst the greenery.  In addition to the above we also had a Purple Swamphen, an overflying Grey Heron, a number of feeding Barn Swallows, our first glimpse of a Bluethroat this year, but not very clear, along with a lone Great Reed Warbler and very close Reed Warbler- though I still have my doubts that the last might even have been a Savi's Warbler.  (I shall have to send a selection of shots to Mick Richardson, John Cantelo and anyone else interested who might like to thrown in their two-penneth worth.)

However, without a doubt the star attraction was the pair of Kingfishers who seemed to take it in turns to pose of the planted post immediately in front of the hide.  Makes you feel so cross when you think of all those past views of a tiny speck at the far side of a river/lake!

Then it was off to the main hide overlooking the Laguna de las Aneas , recording both Stonechat and Spotted Flycatcher on the way, where it soon became evident that the Common Coots were beginning to return along with more Moorhens, Little Grebes and even a pair of Red-knobbed Coots at the back of the water.  In addition to the resident Mallards we found a couple of Common Pochards and three juvenile Night Herons.  Naturally there were a few Grey Herons and Little Egrets, a lone Snipe and Black-winged Stilt but also, surprisingly, a trio of juvenile Flamingos still in residence.

Very little at either of the hides overlooking the Laguna del Trebol other than more Moorhens, Common and Red-knobbed Coots and the same could very much be said for the Laguna del Lirio. But we did come across a small flock of Greenfinches and a single Great Tit.  Strange to record, the only gull we saw was a single immature Yellow-legged Gull.

With a little time to spare we returned to the first two hides where, as stated, we picked up the Little Bittern and another Purple Swamphen.  The new water still had the displaying Kingfishers, I think they were recorded on at least three of the waters,  Not only a Kestrel in the sky but also a single White Stork to give us something to think about.  A large charm of Goldfinches passed over but only a single Serin.


As we made our way back to the gate having only recorded 39 species we were rewarded by a gent;e fly-past from the solitary Black-shouldered Kite which, we hope, may have taken up residence in the area for the coming months.  A great way to end the morning, or so we thought, until entering Turtle Dove Alley to make our way back home Steve thought he had a Marsh Harrier on his side of the car but as it passed over and turned it flashed its distinctive white rump giving us the chance to add a female Montagu's Harrier to the list.  Almost certainly this was the distant raptor that had me scratching my head about thirty minutes earlier.  And add cream to the proverbial cake, we looked out to the right and there was a posing Whinchat.  A final total of 42 species for the morning.