In search of the Nutcracker

Here in the High Ardennes, Belgium with our dear friend, Marieke Berkvens with the hope and belief that, during the coming week we shall have some wonderful views of the local population of Nutcrackers Nucifraga caryocatactes.  Based in an old, converted water mill, Neu Moulin, on the outskirts of Ruy du Moulin, surrounded by wooded hills with flowing streams and picturesque stone villages at an approximate altitude of 300 metres, the small population of resident Nutcrackers appeared as the result of an irruption of the Swiss sub-species of the bird which has a thicker beak that its Siberian cousin and feeds, unlike the eastern race and its pine seeds, exclusively on Hazel nuts.  These elusive birds may be heard but are rarely seen outside their coniferous homes until early September when they spend the whole time gathering Hazel nuts which are then cached.  It is reported that a pair of Nutcrackers may gather as many as 14,000 nuts and create about 9000 caches.  To achieve this result, assuming that a single bird gathers 7000 individual nuts, the bird, if able to carry a maximum of fifteen nuts in its throat, then an average total of 12 journeys per day would be required.   Given that the harvesting period lasts from about 4 September until 13 October, this means that the birds spend about 50% of their waking hours foraging!  Naturally, this average depends upon the annual harvest of good buts.  Unlike Jays and Squirrels, these amazing birds seem able to find every single cache and this is their sole basic food supply for the coming twelve months.   Indeed, fledged youngsters, which are produced early in the year, have to be fit and able to find their own nuts by the coming September.

And so we set off on a three kilometre circular walk in calm, sunny weather with hardly a cloud in the sky.  Leaving the valley bottom, we were soon seeing Wood Pigeons and Magpies and a lone Grey Heron drifted up the valley.  Jays were both seen and heard but, as yet, no Nutcracker.  Blue Tits seemed to be busy in the roadside hedgerows and then, almost on top of us, Jenny was in time to see the Honey Buzzard passing over.  Just time for a very quick photograph before the bird disappeared behind the neighbouring trees.

Hold the press!  Now that I have enlarged the "Honey Buzzard" shot (above) I can see that it is actually "only" a Common Buzzard.  Well, it was exciting whilst it lasted and, hopefully, there will still be some of the former down at Tarifa this time next week.

A distant bird resting on top was unidentifiable so Marieke returned to the house to fetch the scope.  Once back with us I returned to retrieve an aid and whilst the bird had gone she and Jenny did have both a single Nutcracker pass over followed by a Hobby.  Seems my role in birding life is to return to car and/or house so that others can see the wonderful birds that I miss!

A Common Starling was stationed at the end of the roof of the local farm and a Raven was feeding in the field below.  Continuing along the top road we added a juvenile Robin just developing its red breast and a pair of Crows.  The down a track towards the valley bottom where the muddy puddles were attracting many Great and Blue Tits, Dunnock and even a Nuthatch. No shortage of Blackbirds and overhead a Common Buzzard was making lazy circles in the sky (makes this sound like a relapse into Oklahoma!).

Reaching the river at the bottom we had Barn Swallows in the field and then, with more Wood Pigeons and Magpies it was back to the mill.  Immediately opposite we stopped to watch a quintet of Song Thrushes and a pair of Mistle Thrushes a further five metres away.  A Jay came to rest and preen and a Red Squirrel scampered along the grass below the spaced trees.
The afternoon was spent reading in glorious warm sunshine watching the regular visits by both Blackbirds and Blackcaps to the bountiful supply of berries on the Rowan tree not three metres away.  A little later a short drive to a possible second Nutcracker site produced a White Wagtail, Magpies, Crows and a rather lovely female Common Redstart.  Not a bad start to lovely week which promises much more to follow.  The one concern, however, is that whilst we found many signs of Nutcracker activity, there appears to have been a poor Hazel nut crop with many small nuts and even these show signs of infestation; all such nuts having been discarded.  Our Nutcracker is a most selective creature who only takes the best, a perfectionist.  He’s not going to waste his energy on any old rubbish!

Finally, with the warm sunshine came at least four species of butterfly including these two.  No doubt, I will eventually identify or somebody will let me know. 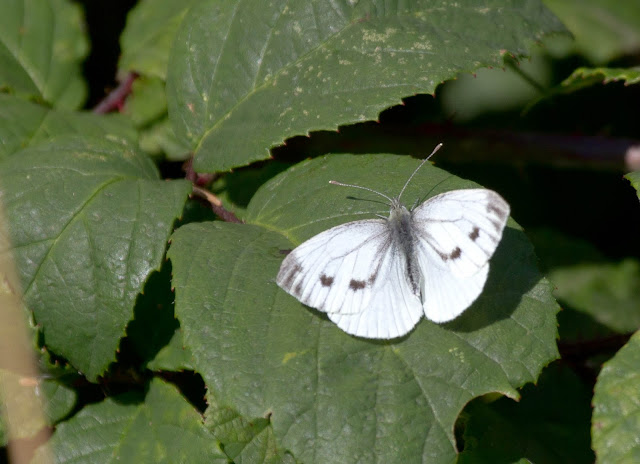 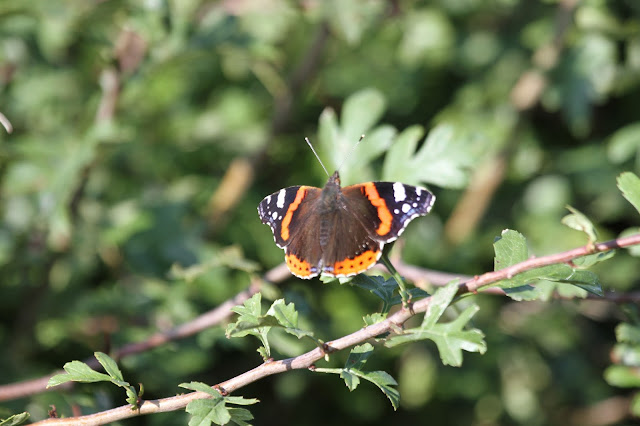 By the way, in case you are interested, the Nutcracker eruption from Switzerland took place in 1968, almost fifty years ago, with the birds finding this area well populated with Hazel trees and nearby pine forests for both caching their spoils and future breeding.  Arriving in time for the gathering season, a plentiful supply of food and no obvious predators or competition, it was not surprising that many adopted their new found territory.

Thursday saw us, unsuccessfully, exploring new areas for the Nutcracker.  Lots of Buzzards and Red Kites along with Great and Blue Tits plus Nuthatch, Dunnock and a calling Bullfinch and then Friday became THE DAY.  An early morning walk produced not only a Dipper and a pair of bedraggled Crows, not to mention a pair of Red Deer, but finally, when almost back at the mill, a large "Starling" flying up the hillside to disappear behind the Hazel hedgerow and no mistaking that Jay-sized brown body with the white spots and thick beak; my very first Nutcracker.

Posted by Bob Wright - The Axarquia Birder at 13:52