Weather all cleared up after yesterday's dull, wet day to give lovely warm sunshine and clear blue skies.   So after a relaxing day I drove over to the Desembocadura de Guadalhorce reserve in Malaga in the hope that an evening visit might produced the visiting Short-eared Owls and even, maybe, a Barn Owl.  Arriving at 4.15 I was greeted by a handful of House Sparrows before setting off to explore the eastern arm of the river before returning to the western arm in search of the owls.

A Little Egret in the river and a couple of Rock Doves under the motorway bridge before carrying on to the Laguna Casillas.  Here I found a large group of Pochard and three Mallard along with a couple of Black-winged Stilts and Coot.  A Chiffchaff was foraging in the nearby tree and in the distance I could see a handful of Spotless Starlings.

Moving on to the Wader Pool I was greeted by a score of Black-winged Stilts along with single Black-tailed Godwit and Redshank.  To me left both a Common and Green Sandpiper were working the shore and towards the back of the water a half-dozen Little Grebe.  Also lovely to see the first Crested Lark and a male Stonechat.

Moving on towards the beach I immediately had a brief view of a departing Kestrel to my right followed by a number of Goldfinches and a few Greenfinch. I slight fall in the water level in the Rio Viejo (Old River) revealed the top of the larger island and this held almost a score of Mediterranean Gulls along with ten Sanderling.  A regular passage of Cormorants to and from the reserve as I continued on and noted the only bird in the eastern arm was a solitary Little Egret.  From the Sea Watch the sea was calm and equally devoid of bird life save for a couple of wandering Lesser Black-backed Gulls. 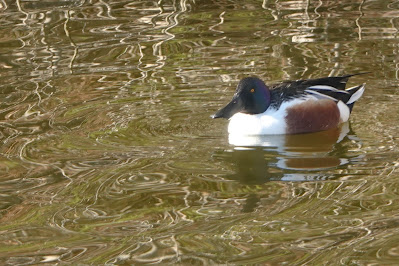 Back by the same route and then on to the Laguna Escondida which proved very productive. My attention was immediately drawn to the very large number of Shoveler which seemed to have taken over this water so room for only the odd Coot and Little Grebe.   However, given time, I also found a single Moorhen as a couple of Jackdaw flew over.  A White Wagtail made a brief appearance and there was lots of Chiffchaff activity.  Above the water a small number of Barn Swallows and also a pair of House Martins.  Carefully checking the reeds to my immediate left I was rewarded by a single Penduline Tit followed by a couple of Stonechat and then the appearance of the only Black Redstart of the visit.  The passing of a handful of screaming Monk Parakeets was my cue to move on to the main hide overlooking the Laguna Grande.

There were so many people about the area that I was, perhaps, not surprised to find "no room at the inn" when I arrived at the hide.  However, most were "passing trade" so soon able to settle down and appreciate the large number of Cormorants along with a couple of Heron.  Already the Cattle Egrets were starting to arrive for the evening roost and by the time I departed the total had exceeded 150 individuals.  In addition, I found a couple of juvenile Flamingo along with the hundreds of Black-headed Gulls on this and the neighbouring waters.  Additionally, also a very small number of both Lesser Black-backed and Yellow-legged Gulls.

Cormorant numbers had now reached in excess of 60 individuals so time to take a closer look at the nearby waders which included  Black-winged Stilt, Greenshank and Common Sandpiper. Searching the back of the water I found ten Black-necked Grebes along with three White-headed Duck.

There must, in total, spread along the whole of the back been at least twenty Shelduck and then a distant Redshank.  In the past I have never seen more than a handful of Jackdaws on visits to the Guadalhorce but on this occasion they seemed to be forever arriving and eventually, above the roosting Cormorants and Cattle Egrets, I counted 27 individuals.

No sign of one of the resident Barn Owls but a very distant record shot of the suspected nesting site produced a shadowy image.  But was it or was it not a Barn Owl getting ready for its hunting night on the reserve?

Time to move on with the light rapidly receding and a study of the meadow produced two distant views of quartering Short-toed Owls.  Too far away for a decent photograph and a walk back towards the exit gave me chance to get closer viewing and with dusk rapidly encroaching a late Blackbird flew past to provide the last species of the visit.

Check out the accompanying website at http://www.birdingaxarquia.weebly.com for the latest sightings, photographs and additional information
Posted by Bob Wright - The Axarquia Birder at 02:12