Another calm, sunny and warm day so up to the old railway track at Ventas de Zafarraya to met up with friends Derek and Barbara Etherton along with Jerry and Barbara Laycock.  First a walk up the track and back and then a visit to the arable fields beyond the "Magpie Woods" with finally some time at the picnic area in the woods of El Robledal.  Great company and some lovely birds recorded.

Collared Doves as I set off along with a lone Blackbird and the usual small flocks of House Sparrows and, arriving first, was able to watch a pair of Great Tits in car park and noticed the lone Ibex atop the mountain on the opposite side of the main road.  A small charm of Goldfinches crossed the track and the first sightings of Blue Rock Thrushes.

With the arrival of company we set off up to the tunnel finding more Blue Rock Thrushes, a single Black Wheatear and a handful of House Sparrows.  A Blue Tit was feeding in the small tress near the miniature railway terminus and approaching the tunnel we became very much aware of the large number of Crag Martins feeding in the immediate area.

Once out of the tunnel we started to see a number of Sardinian and even the occasional Dartford Warbler.  The resident Peregrine Falcon put in a wonderful display as it moved down the cliff and then quartered its local territory.  A single Chaffinch was an unexpected sighting and then, for me, the bird of the day with the discovery of an Alpine Accentor, a not too often species seen at this site.  By now a number of Stonechat and more and more Black Wheatears were being seen along with the Crag Martins and Sardinian Warblers.  Our final bird at this site was our one and only Black Redstart of the morning, a most handsome male.

Off towards the Magpie Woods where Jerry saw a couple of Azure-winged Magpies as we climbed the entry slope, but not before a slight diversion through the very fertile growing fields and local pond.  here we managed to find a score of more Mallards on the latter and numerous Grey Wagtails feeding on the abandoned tomatoes, presumably attracted by flies and insects, whilst a trio of Crested Larks were feeding near the nearby fence.  Also on the fence both House Sparrow and Linnet.

Once at the growing fields at the far end all was relatively quiet though we did add a few more Crested Larks and a small number of Barn Swallows were feeding close to the ground.  Away in the distance towards the hills above Zafarraya two score or more Choughs were feeding on the slope and it the opposite direction a resting Kestrel. 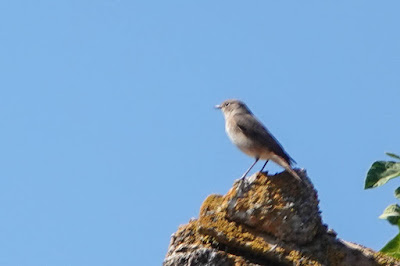 And so to Robledal where our first stop in the pine trees produced a lovely Crested Tit followed by Short-toed Treecreeper and a Great Spotted Woodpecker.  Next stop the parking area having noted a pair of both Common Redstart and Pied Flycatcher as we entered.  The top area of the car park is a lovely spot to see some of the local birds and ere long many more Common Redstarts along with Pied Flycatcher, Sardinian Warbler and a Robin.  Even another Great Spotted Woodpecker.  Overhead a Booted Eagle was being mobbed by both House Martins and Barn Swallows and then the (late) passage of many Bee-eaters high above.  Whilst watching the activities of the Common Redstarts we also managed to add a male Blackcap  and lone Blackbird before a trio of Wood Pigeons flew over.  Our last bird was a circling Buzzard as we mad our way along the track towards the main road before finally adding Spotless Starlings as we drove through Ventas de Zafarrya.

A most enjoyable day with wonderful company; so much appreciated.

Check out the accompanying website at http://www.birdingaxarquia.weebly.com for the latest sightings, photographs and additional information
Posted by Bob Wright - The Axarquia Birder at 04:14