Off early at 8.45 for a day's birding with special friend Elena Powel concentrating on the lakes above and beyond Alhama de Granada but with a first stop at Ventas de Zafarrya and the nearby "Magpie Woods."  Warm but cloudy and very tired when we got back to Mezquitilla having recorded a total of 60 species for the day including some great birds such as Common Cuckoo, Blue Rock Thrush, Great Spotted Woodpecker, Whitethroat and Spotted Flycatcher amongst others.

Approaching the first stop the mirador on the old railway track at Ventas de Zafarraya we not only had a couple of Hoopoes fly over the road but a couple of score or more of Barn Swallows.  It seems too late to be arriving and too soon for departing individuals so I am assuming a "gang of roving teenagers" made up of recently fledged first brood Barn Swallows.  Cloudy and a very large herd of goats (domestic not wild) feeding on the slopes but we did find Thekla Lark, Chough and Black Wheatear before driving up the track and parking outside the old tunnel. A good number of the breeding Crag Martins about and saw more Blue Rock Thrushes than Black Wheatears.  A Wren was perched on the wire in front of the tunnel and the Choughs were whirling and calling along the cliff face.  Both Rock Sparrow and Rock Bunting were noted along with a couple of Blackbirds and then, having walked trough the tunnel, a couple of Alpine Swifts.  Elena was first to spot the single Goldfinch.

Spotless Starlings, House Martins and House Sparrows as we drove through the village to make a short stop at the usual cross-tracks as we entered the Magpie Wood.  Immediately, an Azure-winged Magpie on the road and another disappearing int the trees.  More Blackbirds, a Mistle Thrush and plenty of Chaffinches to be seen and heard as the Collared Doves flew over.  Through the woods and took the left turn towards the growing fields to find the resident larks and immediately, sat on the road, a Turtle Dove.  Having stopped we found six more either feeding on the ground or resting on the overhead wires.  A Corn Bunting rested alongside and as soon as we reached the "rockery" a handful of Short-toed Larks along with Crested Larks and, having stopped in the usual place, we were soon seeing a good number of Calandra Larks along with a pair of feeding Hoopoe.

A good job we decided to take the old road up to main Alhama to Salar road as we not only had some incredible bird sightings but also discovered that the abandoned and pot-holed road had now been graded and perfectly safe for even "normal" cars.  At least half-dozen Common Magpie and then not one but two Little Owls posed close to the road.  Wood Pigeons and Common Swifts above and even a handful of Linnet. A short stop at the old ruined farm buildings off the main road was evidence that Lesser Kestrel numbers are down this year with only a quartet seen but also a single Common Kestrel.  Also present a lively Zitting Cisticola. 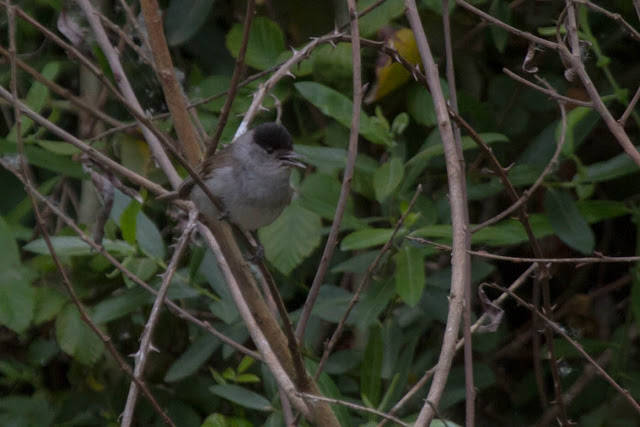 Then it was on through the town of Alhama de Granada, past the cemetery and off to the large Los Bermajales reservoir.  Approaching the water a Common Cuckoo flew across the road immediately in front of the car and stopping in the woods as we approached we had many Chaffinches and a Great Tit.  The dam area was alive wit feeding House Martins and other than these birds feeding over the water and a lone, resting Cormorant there was not a bird to be seen.  A walk around the picnic area produced both Short-toed Treecreeper and Greenfinch along with a few Magpies and a Marsh Harrier which took to the air having been disturbed by a wandering walker near the water's edge.  Further round we also added White Wagtail, Mallard, a nesting Coot and at least eight Grey Heron from the nearby heronry.  We also saw and heard both Cetti's Warbler and Jackdaw.

Next, following a meal in the nearby venta, a walk down the track alongside the outflow from the lagunetta above Alhama de Granada. On the water there had been just the single Little Grebe and a very small number of Mallard and Pochard.  Straight away a Robin and, probably, nesting pair of Blackcap.

Meanwhile the song and calls of the Nightingales was almost deafening and even a Golden Oriole was calling from the woods beyond.  Both Grey Wagtail and Serin were quickly found and, having crossed the small bridge to walk down to the shrine, we were able to add Goldfinch, more Blackcaps, a Cirl Bunting and Whitethroat before arriving in front of the gorge which produced Jackdaw, loads of Chough, Rock Sparrow and even a close view of another Blue Rock Thrush.  Wood Pigeon was sitting tight on her nest as a Red (black out here) Squirrel ran along a fallen trunk before taking to an upright tree.  A couple of Spotted Flycatchers were working the far clearing and the return walk produced House Martins, Barn Swallow and Spotless Starling along with a couple of recently fledged Great Tit.  Even a Great Spotted Woodpecker took to the airs to prove another sighting for the day which, by now, had just about reached the sixty mark.


An excellent day's birding enjoyed by both of us with Elena looking forward to Steve's return from Florida on the morning and me off to check Jenny's progress at the local hospital.


Check out the accompanying website at http://www.birdingaxarquia.weebly.com for the latest sightings, photographs and additional information
Posted by Bob Wright - The Axarquia Birder at 13:26