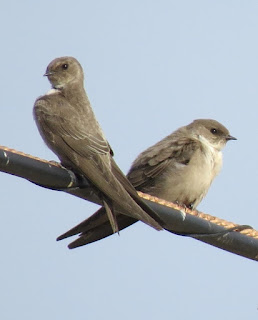 Interesting report from David and seems to confirm our experience last week that there are very few waders about and summer hirundines are still yet to arrive.  However, lovely to read about the Woodcock.

Following in the Axarquia Bird Group's footsteps, we decided to visit Las Norias & Roquetas this week.  Richard, Gilly & myself met up with Alan, Les & John at the Jct 420 service station for a coffee before heading to the first causeway at Las Norias.  The water was dead flat, so we could easily see Great Crested, Black Necked & Little Grebes together with Coot, Moorhen & Mallard. Down the far end we could see a line of resting Cormorants on posts and in front of them, Red Crested Pochard, Shoveler & Black Headed and Yellow Legged Gull . Overhead and in lines on the power cables were hundreds of Crag Martin.  Les spotted some distant White Headed Duck.  Also seen were Chiffchaff, of course, Sardinian Warbler, Stonechat & White Wagtail.

Moving round to the litter strewn stop on the long side, we saw much of the same until a bird was flushed in front of Gilly.  It flew at eye level past all of us.  A Woodcock.  A summer passage migrant according to Collins!  Alan had a brief view of a Whiskered Tern and Richard found a Bluethroat. Also seen were Hoopoe, Serin, Greenfinch and a Teal.

We next stopped at the smaller lake, at the opposite end to the plastic recycling plant.  Lots of Red Crested Pochard with a Shoveler or two.  Les spotted a wader, but flew before being identified.  It was probably either the Redshank or Common Sandpiper was saw shortly afterwards.  On the grass field Les found a Meadow Pipit and I spotted a Grey Wagtail amongst the White ones.  A walk along the road to the little bridge didn't add to the list.  Considering this reserve is a heron/egret breeding area it was disappointing to see only one Little Egret and a few Grey Heron.

We then followed Les's directions to the lighthouse end of the Roquetas salinas, having stopped for a coffee in San Agustin.  We'd seen Kestrels on the way and some very close Greater Flamingo.  At the first stop, a lake surrounded by reeds, John soon spotted a pair of Purple Swamphen.  On the water was a raft of mixed Common & Red Crested Pochard.  Gilly then found a single Glossy Ibis.

The next stop, a causeway between two salinas produced huge numbers of Lesser Black Backed Gulls and a few Audouin's as well.  A pair of Gadwall was seen.  There was a Little Stint as well as Black Tailed Godwit, Sanderling, Black Winged Stilt & more Redshank.  Les spotted a Stone Curlew and a Grey Plover.  Some distant Marsh Harriers were seen.  Richard who'd stayed by the vehicles had a Snipe, Stonechat & Goldfinch.  I spotted a distant Slender Billed Gull before we headed to the small pool where the Red Knobbed Coot used to be, alas no more!  Apart from Coot, Mallard and a male White Headed Duck we did see a hen!  Les, Alan & John had a probable Booted Eagle en route.  The big lake was as usual populated with many Coot & Black Headed Gulls.  We did see a small raft of White Headed Duck.


Check out the accompanying website at http://www.birdingaxarquia.weebly.com for the latest sightings, photographs  and additional information
Posted by Bob Wright - The Axarquia Birder at 13:13