Recovering from the disappointment of the sudden, last minute cancellation of our visit to the Isla de las Palomas in Tarifa, Marieke and I paid a mid-morning visit to the Sierra Loja where the mountain scenery is always spectacular and certainly not found in her native Belgium.  The recent rains had certainly replenished the ponds and water troughs although, on the other hand, removed the necessity for the birds to concentrate in the only areas that held a little water.  Lots of Mistle Thrushes in the lowest woods along with Blackbird and the occasional Chaffinch.

The main quarry was somewhat disappointing with just the odd Stonechat and a small number of Jackdaws making use of the Eagle Owls' cliff face until we heard the first Red-legged Partridge, looked up and saw the Goshawk making its way across far above.  No sooner seen than we had at least five Lesser kestrel feeding above, almost certainly on the swarms of flying ants.  The first Choughs were heard and then our first Rock Bunting as we moved back down the entrance track to continue on our upward journey.

Relatively quiet as we made our up but a number of Thekla Larks and more Red-legged Partridges and Jackdaws kept us occupied until we found a very welcome sight above the treeline.  A lone Ortolan Bunting feeding on the side of the track refused to move away giving ample opportunity to get some photographs despite having to lean over Marieke to see this very close bird at less than three metres.  In the end I simply and quietly left the car, walked round the back and got even better views albeit the bird was now viewed more from behind than in front or alongside.  And still the bird would not depart so giving a look at its strange upper mandible.  We thought it was the black shell or remains of recent food but now wonder whether or not it might have been some form of growth.

The area around the Charco del Negro produced Goldfinch, Serin and Linnet along with Black Redstart and our only Blue Rock Thrush.  having seen our first Northern Wheatear on the rocks near the electricity station we now added a second individual.  The "Fossil Cave" duly produced a number of Rock Sparrows in addition to more Goldfinches and, above,  the only sightings of Crag Martin during the visit.

Driving down past the berry bushes we found just the one female Ring Ouzel but more Blackbirds feeding on same but it was as we started our return that we stopped to watch the passing immature Golden Eagle which was a great privilege and only spoilt by the low, thin and misty cloud.Wow!  A nearby small tree then produced a lone Chiffchaff. 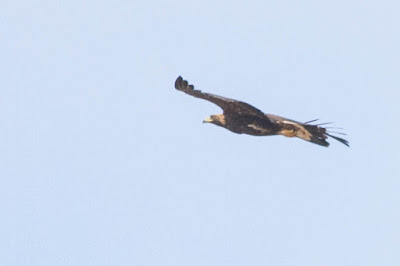 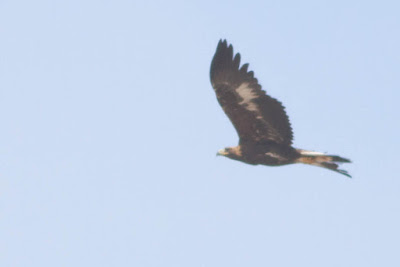 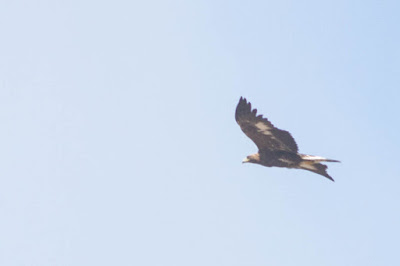 Working our way back down the track we had a flock of about thirty Choughs then a good number of Azure-winged Magpies as we entered the trees.  In addition, the Golden Eagle flew towards and over us at a very low altitude as if to thank us for our visit!  Finally, almost back at the bottom we stopped to admire another Red Squirrel (black out here in Spain) which posed very close to the car before a fast-travelling following vehicle frightened it away.  Both Spotless Starling and House Sparrow added once back at the farm buildings.


Time enough to pay a very short visit to Huetor Tajar where we completed the usual short circuit having walked the track at the edge of the town.  Here we picked up Tree Sparrow and Crested Lark along with another Chiffchaff and Collared Dove.  No Stone Curlews or Little Bustards seen here but that might be down to the fields being worked or the heat of the afternoon.  The drive around the local Cacin river and neighbouring fields produced more Azure-winged Magpies and Crested Larks along with a Hoopoe, pair of (Common) Magpies and another Common Kestrel.


Check out the accompanying website at http://www.birdingaxarquia.weebly.com for the latest sightings, photographs and additional information
Posted by Bob Wright - The Axarquia Birder at 21:55