Beautiful, clear weather, great company and marvellous scenery for the Andalucia Bird Society's field visit to Cabra in Cordoba province led by Antonio Pestana.  Not so much the quantity as the quality of birds and, as a first visit to the area, those wonderful vistas.

The morning was spent in Zuheros and the hills above.  Driving to the site we managed to encounter Collared Dove, Spotless Starling and a Kestrel before parking at the lower end of the village.  We had good views of Pergrine Falcon along with Stonechats and Black Redstarts that refused to leave us.  Both a number of Blue Rock Thrushes and Crag Martins were seen on and in front of the cliffs and the former even on the ground immediately in front of the group of seventeen.  As we got into our cars to drive towards the top an Orphean Warbler also presented itself to four members within three metres of the road.


Once near the top we had good views of the Griffon Vulture riding the thermals along with a couple of Short-toed Eagles.  Both Buzzard and a very close Booted Eagle were also seen.  Not the number of corvids that we had expected a but a couple of Jackdaws did take to the skies.  On the stony ground below the road and also in between the scattered, very old olive trees we soon found numerous Black Redstarts and Stonechats but the, in due course, also picked up the larks, mainly Crested but a at least a couple of Thekla Larks.  However, the most pleasant sight was that of the Common Redstarts still in glorious colour.  Barbara and Ron managed to find a lone Nuthatch which, evidently, is almost unheard of in this area.  Black Wheatears were relatively common and eventually seen also both Blue Tit and Goldfinch. 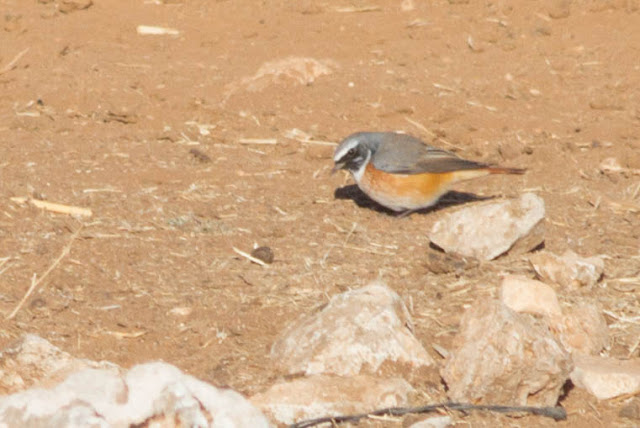 Lovey to find a couple of Pied Flycatchers showing well so that when the Spotted Flycatcher came along it was rather special. With both Sardinian Warbler and Blackbird recorded plus a handful of Rock Doves, it was time to make our way back down the mountain, recording a Hoopoe on the way to the cars, and off to a small pine wood on the outskirts of Cabra itself.  Here, close to Antonio's hand-made hide, we found many more tits and especially Great rather than Blue Tits.  Also seen were a couple of small flocks of Crossbills plus a quite large flock of Greenfinches plus Serin was heard.  For  some the sight of a close Spotted Flycatcher found by Marja was very rewarding and as we left to take a short lunch break we had an individual Red-rumped Swallow above us.


After our lunch break it was of to the "Balcon of Andalucia" and what magnificent views of the region when we arrived, even if the only birds seen were a Chaffinch and passing Grifon Vulture immediately overhead.  We were shown the nest site of the resident Bonelli's Eagle and Derek pretty sure that hew had a distant Bonelli'e Eagle moving from (his) right to left over the distant mountain ranges.

On the other hand, the stop just below the summit produced more Crested Larks, Black Wheatears and Blue Rock Thrushes along with a relatively close Orphean Warbler that was seen, I think, by just about all members.  Then followed the drive down the twisting road back to the A318 and our return to the original meeting point at Hotel Mitra from where we said our good-byes and headed back to our respective home.  Great day in great company.

Check out the accompanying website at http://www.birdingaxarquia.weebly.com for the latest sightings, photographs and additional information
Posted by Bob Wright - The Axarquia Birder at 04:48