With showers yesterday and more rain forecast for Tuesday, it would seem that today was the obvious choice to pop over to Rutland Water for a couple of hours or so.   What you might call a white morning;  lots of white cloud in the otherwise blue sky and the water full of white birds including Mute Swans, a number of Lapwing and Oystercatchers and the occasional Shelduck along with the white flashes on the male Tufted Ducks whilst, above, no end of breeding Black-headed Gulls along with their ochre-tinted juveniles, but many others till on the provided nest boxes, a pair of Yellow-legged amidst roosting Great Black-backed Gulls and feeding Common Terns.  Whereas no sign of the resident Ospreys on or over the water, as I made my way via the Lyndon Centre an individual crossed low over the road immediately in front of the car near the dam.  As I said, a morning of white which was even found on the Chaffinch flashes, Coots' foreheads, necks of Canada Geese, the feeding Great Spotted Woodpecker and the very many Wood Pigeons.  Looking at the above it might have been quicker to name the birds without a marked white area! 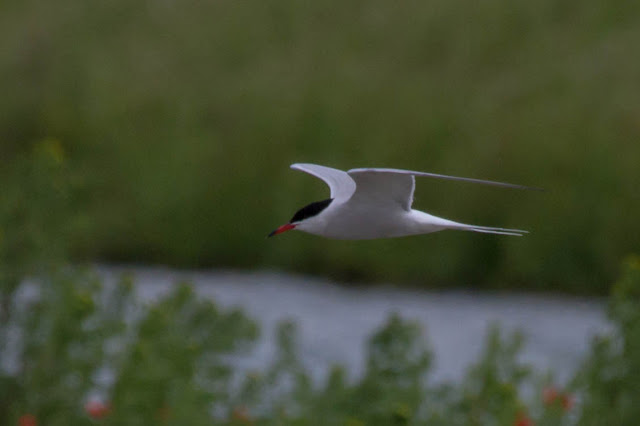 In addition to the above there were many sightings of the local Jackdaws along with a few Carrion Crows and a pair of Magpies (yet more white birds) feeding on the nuts at the Lyndon Centre along with both more Chaffinches and Tree Sparrows.


Blackbirds were recorded at the main feeding station along with both Blue and Great Tits, a single Robin and Dunnock and even a cock Pheasant put in an appearance.  The Great Spotted Woodpecker was on the back feeders and almost hidden from sight behind the tall vegetation where also a Collared Dove was having a go at the feeders.

From the Visitors Centre I looked out onto the water which included Mallards, Tufted Ducks, Cormorants and Coots in addition to the many Black-headed Gulls which seemed to occupy the top of every post in sight.  Just the one pair of Mute Swans as most were on the main water just beyond the North Arm with a smaller number on Lagoon 4.  Also on this lagoon I was able to observe the female Great Crested Grebe with her chicks hanging on to her back whilst the male continued feeding nearby.

Many Sand Martins were feeding over Lagoon 2 from their artificial nesting colony to ad to the Barn Swallows seen as I approached the site.  Lagoon 3 provided a range of ducks including Mallard, Tufted, Shelduck, Pochard, Gadwall and Wigeon.  No Heron this morning but I did observe a pair of Little Egrets.  By way of variety, as I entered the Buzzard hide and looked through the opening a single Reed Warbler made a dash for cover.

Other birds seen at the main feeding station included both Greenfinch and Goldfinch along with a handful of House Sparrows but the Common Starlings were recorded feeding on and near the sheep in Egleton village itself.

With very high water levels and all the fields and borders looking as if they were trying to establish themselves as a rain forest, it was, perhaps, no wonder that only 41 species were recorded and a reason for not staying longer.  Now, with luck, I can finish the blog and then be free to watch the England game to see if they can join my Welsh boyos in the final sixteen!

Check out the accompanying website at http://www.birdingaxarquia.weebly.com for the latest sightings, photographs and additional information.
Posted by Bob Wright - The Axarquia Birder at 11:56