The weather forecast/promise was that today would be the best day of the week with a mixture of cloud and sun and becoming even brighter later on.  Given that I would be setting off in the dark just before 7 for the journey over to the Titchfield RSPB reserve in North Norfolk in order arrive by 8.30 and the massed ranks of birders from far and near, I certainly hoped that there would be no change of forecast during the night.  Indeed there was not, I arrived on time with the temperature a rather cold 3C and even signs of a little frost on the sheltered boardwalks but the sun it shone from a clear blue sky and by late morning in the gentle breeze it was truly wonderful.  And the birds were good as ell with a total of 50 species recorded by I drove over to Cley via Brancaster Staithe and Holkham.


The above total included three geese, three pipits and three tits but, for me, perhaps the best sighting of the day came a t the very beginning as I approached Titchwell from inland having passed through Doking.  I had seen my first Rooks, Crows and Jackdaws for the day and watching a Pheasant scurry across the road in front of me I saw it almost bump into a Grey Partidge and following its line of direction through a large gap int hedge noticed that there were three more in the open field quietly climbing away from me.  After so many Red-legged partridges in Spain, how lovely at last to see a native species.  Once in the nearby car park at the reserve I noticed that the really dedicated birders were already on site as there were at least ten cars already in situ.  Into boots and as many coats as I could get on I set off for the entrance complete with bins, camera and scope.  Would there be a Brambling on the feeders?

Yes indeed there would.  Loads of Chaffinches and Greenfinches, a few Goldfinch and very many Blue and Great Tits along with a family of Long-tailed Tits but then, in from the surrounding foliage, the first of a couple of winter-plumaged Bramblings and my heart sang with joy having missed this bird last year.  Not only Brambling but a Lesser Redpoll as well, yet another "escapee" from last year's sightings.  However, these were not the first birds seen on the reserve.  I was greeted by a friendly Robin, perhaps they are used to collecting an entrance fee from every visitor by way of a crumb or two, and they certainly seem to appear wherever you went near the Visitors Centre.  Also present were a couple of Blackbirds and they, too, seemed to be out in force but, more than any other species, there seemed to be Wood Pigeons in every tree and vantage point.  Under the feeders themselves the Pheasants and Moorhens were busy feeding on the spilt seed but, neither here nor anywhere else, did I see either a House Sparrow or Collared Dove anywhere.


Walking round the back and along the boardwalk to the Fen Hide and Patsy's Reedbed I came first across a Wren quickly followed by good view of a Cetti's Warbler at the latter.  On the pond itself were a good number of Gadwall and a couple of Tufted Ducks and a handful of Teal along with a similar number of Mallards.  But very few Coots.  A short stay at the fen Hide itself but nothing to be seen although I was told that a pair of Barn Owls had passed over about thirty minutes previously and so it was back to the Visitors Centre to start the walk down tot the beach as the Pond Trail was closed for repairs.
I had seen small flocks on the way, they could be heard calling in the distance as I started along the path the first good-sized flock of Pink-footed Geese passed over and continued to do so for the rest of the morning.  A Marsh Harrier was quartering the reeds to my right and a pair of Little Grebes were diving up and down in a channel to the right as only Dabchicks can.  I had heard about what was to be seen in the dry pond on the left so stopped and used both bins and scope to successfully find the mixed pipits feeding on the damp soil.  I only found a couple of Meadow Pipits and the same with the Water so leaving Rock Pipit as the most abundant species.  All three good to record and observe, noticing the various different markings and colours.

Next up was the Island Hide to get my first good look at the waders, ducks and geese on the shallow water.  Scores of Lapwings, and these birds were to be seen everywhere and in good numbers, along with a relatively large flock of Brent Geese.  No shortage of Teal on this water and very many Common Redshank plus a large flighty flock of Dunlin.  Among these smaller waders I managed to find a single Ringed Plover.  Just a few Shelduck, most along with more Common Redshanks, were to be seen on the Volunteer marsh from the North Parinder Hide.  At the far side about thirty plus Avocets were sheltering along with a similar number of Black-tailed Godwits and many more Lapwing and Brent Geese.  Finally, nearer to the path when viewed from the hide, a single Grey Plover, a pair of Shoveler and a small flock of Greylag Geese. 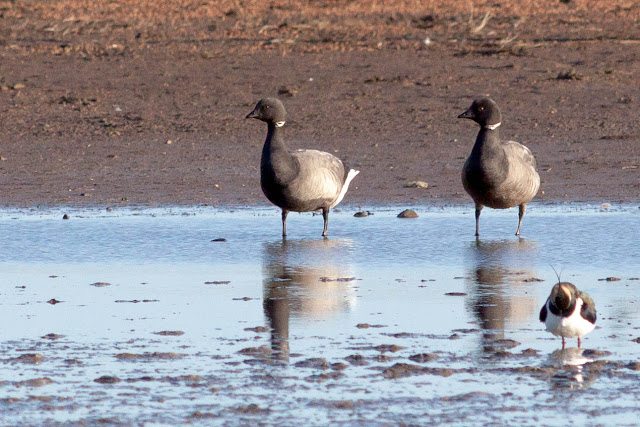 Continuing on along the path to the beach I had first a single Little Egret and then a sleeping handful of Common Redshank with an odd Whimbrel at their side.  Black-headed Gulls were constantly passing overhead in ones and twos and then I was at he beach and very few birds to be seen at the edge of the water.  A couple of Oystercatchers, although there were a good number to be seen further east along the shore, and a pair of Turnstones.  On the choppy sea itself I managed to find a quintet of Great Crested Grebes and a small raft of Common Scoter.

Working my way back to the Parinder Hides I finally recorded a Curlew along with many more Common Redshanks and it was from the South Parinder Hide that I picked up the single Spotted Redshank working its way along the back of a small island among the mainly Lapwing.  And so it was the long walk back to the feeding stations at the Visitors Centre where the Greenfinches seemed to have taken over but I did have another sighting of the wintering Brambling and this is when and where the Lesser Redpoll put in its appearance.

Now after 1pm and I decided I would drive on the Brancaster Staithe to eat my picnic lunch overlooking the river.  Lots of Oystercatchers to be seen and a few Turnstones.  Both Lesser Black-backed and Black-headed Gulls put in an appearance but it was a pleasure to have a close Common Gull resting on the shingle below me.


A short stop at Holkham overlooking the flooded fields produced more Pink-footed Geese, Teal, Lapwings and Common Redshanks before arriving at Cley, with a Kestrel hovering overhead, from where I drove straight to the beach.  Stopping a couple of times on the way don the narrow road I had a close view of a feeding Oystercatcher and then found a small group of about ten Golden Plovers resting under the lee of a grassy bank.  Nothing untoward on the sea other than a couple of Cormorants but I did have close views of Herring, Common and Lesser Black-backed Gulls.  A look over the nearby water from the Visitors Centre suggested that there was little extra to be seen other than a Mute Swan so I made an early start back to Stamford so that I might arrive before all the light was gone.  A most enjoyable day.