You have to admit, once John and Jenny Wainwright get going, they get going!  Yesterday saw them at Fuente de Piedra and the nearby Laguna Dulce where, as you might well expect, the birds were waiting to be recorded.  As for me, a little overnight fog to clear but very quickly a lovely sunny morning so I was able to spend time at mt local patch here in England, Rutland Water.  Report later if time.  Meanwhile, John's report follows and all photos on this occasion were taken by John himself.

A warm but breezy day, looked like rain later.  A ride over to Antequera to order Jenny´s new glasses and then off to Fuente de Piedra.

The flood meadow on the left of the approach was alive with waders, consisting of at least fourteen Black-tailed Godwits, several Ruff, Redshanks, a Common Sandpiper, Teal, Shoveler, Gadwall, Mallard, Common Coots, a Black-winged Stilt, Moorhens, and a Little Grebe.

As we parked up a Short-toed Eagle soared past in the direction of Piedra village but very high.Also here we saw Meadow Pipits, one Pallid Swift, several Barn Swallows, House and Crag Martins, Jackdaws, two Gull-billed Terns and in the small bushes we found Black Redstart, three Spanish Sparrows, Sardinian Warblers and Chiffchaffs.


At the boardwalk we saw more Black-tailed Godwits, Shovelers, more male Spanish Sparrows, House Sparrows, a Grey Wagtail, Ruff, Shovelers, Snipe, Greater Flamingos and Chiffchaffs.  As we walked along the main track to the scrape a Little Owl was calling from the oak tree on the left, and on and around the scrape we saw four Little Ringed Plovers, Cetti´s and Sardinian Warblers, Black-headed Gulls, Shovelers, Moorhens, Black-winged Stilts and a few Linnets.

The laguna itself had lots of Greater Flamingos, rafts of mixed gulls, including Lesser Black-backed and Yellow-legged.  We continued on to the closed hide where we found Pochard, Little Grebe, White-headed Ducks, Mallard, Teal, Shovelers, a Hoopoe, Jackdaws and Black-winged Stilts. Hirundines were in good numbers here, the majority being Barn Swallows, with House and Crag Martins.  A sudden lift-off of gulls and the arrival of a female Marsh Harrier which just cruised through and wasn´t seen again.  With the gulls coming back in we located, Herring, Yellow-legged and Black-headed and another Snipe flew into cover of the reeds.

Moving onto the small open hide we were amazed to find not one but four Mongoose just lazing about being scrutinised by the rabbit population and a few Moorhens, also here we saw Goldfinches, a lone Little Ringed Plover and a couple of Gadwalls. 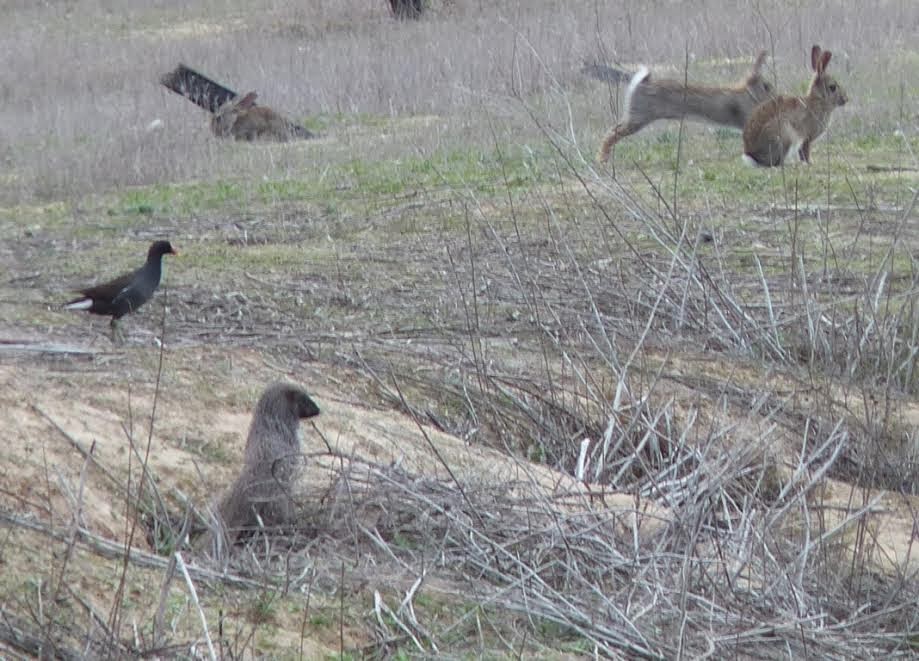 Back to the car for some sustenance and off round the laguna to Laguna Dulce, en route seeing Stone Curlew, two Ravens, another Marsh Harrier, Common Kestrel and more Linnets.  Rounding a bend we came across another two Ravens feeding on road-kill and also about were Spotless Starlings, House Sparrows, Crested Larks, a Common Kestrel and a Sparrowhawk was seen sweeping over the olive grove.


Arriving at Laguna Dulce, priority No 1 a cuppa then spent a while looking for the Ruddy Duck that Andy Paterson told us was here- no luck here!

On the sandy water line to the left of the hide we found two Little Ringed Plovers and two Kentish Plovers and three Lapwings.  Behind us and across the main road to Campillos we could hear a Buzzard mewing but could not locate it.  Lots more House Martins and Crag Martins here with a smattering of Barn Swallows.

The wind has freshened somewhat and it is spitting every now and then so back to Salar, after a very good days birding.


Definitely some great birds seen during the day.

Posted by Bob Wright - The Axarquia Birder at 09:54