Off to Ronda on Friday so, naturally, we called in at the Laguna Dulce and the neighbouring Campillos lagunas.  Very hot and the water looked tempting for me nevermind the birds!  Woodchat Shrike as we came off the mountain along with a pair of Rock Buntings and then a single Black Kite west of Antequera.  Arriving at the Dulce it was obvious that the Coots had returned with a vengeance; there were hundred including the resident birds with their families.  Indeed, the chicks seemed to range in age from almost adult plumage down to a few who looked no more than a week or so old.
In addition tot he Coots, the next most populous bird was the White-headed Duck whose numbers could be measured in the high scores.  There were also some Common Pochard abut only a handful of Mallard to be seen.  A flock of about forty Lapwing were working the fields top the right of the main hide and all three Grebes were present; mainly Little but a good number of Black-necked and a couple of Great Crested.  Around the edges we counted about fifty Greater Flamingos and a single Cattle Egret but no Little Egrets or herons.  Above the water a pair of Gull-billed Terns and a number of feeding Barn Swallows along with the odd Common Swift were recorded.  Finally, a couple of Moorhens and a Common Sandpiper then we departed to the neighbouring lagunas starting with Redonda where we found yet more Greater Flaminmgos.

Every sheet of water seemed to contain good numbers of Greater Flamingos and, in total, we exceeded 150 for the area.  At the Laguna Redonda we also had both Green Sandpiper and Little Ringed Plover and, continued searching with the scope also located both Ringed and Kentish Plovers.  At this water, which is very shallow, we also found a handful of Shoveler.  Fewer Coot here; they were all at the Dulce for their July holidays.  On the other hand, this water did hold a number of Black-winged Stilts.  Naturally, there were good numbers of Goldfinches and Collared Doves to be seen both at the lagunas and travelling between the waters.  Indeed, we had a singing Turtle Dove at the Laguna Dulce and during the morning a couple of Common Kestrels.  The Laguna Capacete was also well full of water but nothing knew was to be seen even if there were plenty of Flamingoes.

Saturday saw an early start to meet up with fellow members of the Abdalucia Bird Society for a morning's visit to the Montejaque area before the Annual General Meeting.  The first stop produced a pair of Great Spotted Woodpeckers as soon as got out of the cars and thee were quickly followed by Stonechat, Bee-eaters, Pallid Swift, Melodious Warbler and both Barn and Red-rumped Swallows.  A couple of Golden Orioles flew over but I was one of many who did not pick up the pair of departing Cirl Buntings.

The next stop overlooking the rocky cliffs soon located a continuous stream of Griffon Vultures and then both Bonelli's Warbler and Iberian Chiffchaff followed by a pair of Sardinian Warblers.  Both Chaffinch and Rock Buntings moved through the area and whilst watching a family of Ibex deal with the rocky slopes we had both Common and Alpione Swifts below us along with a few Crag Martins.  Before long we had also found the local Blue Rock Thrushes and then a Sparrowhawk darted through our vision.  Whilst at this site we also recorded House Martin, Great Tit and Goldfinch with yet more Hoopoes. 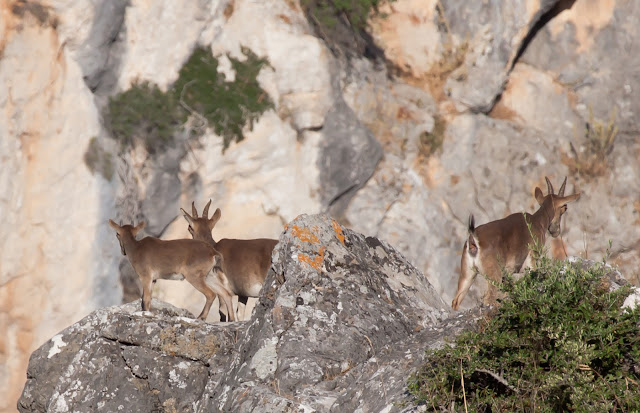 Moving up to the Libar valley, where we drove to almost the far end with a number of stops, we managed to see lots of butterflies (mainly    ) but also a rather lovely pair of Little Owls and then more Black Redstarts.  Either side of the track we picked up regular sightings of Lesser Kestrels and a number of Black-eared Wheaters before finding a couple of Northern Wheatears.  Black Wheatears were also seen and recorded.  In addition to the Woodchat Shrikes it was also lovely top see a couple of Orphean Warblers and then, with the Griffons, a single Black Vulture soaring along the cliff top.  Towards the top of the valley we had a flock of "genuine" Rock Doves below and up to a dozen Choughs above the cliffs.  As has been recorded elsewhere thus year, a general lack of large raptors but Short-toed Eagle was seen and then, having returned to Ronda for the Society's AGM, at the conclusion of the business a Booted Eagle drifted across above us; obviously smelt the chicken and sausages on the barbecue!  Add on Serin, Wood Pigeon and Corn Bunting and it was a most enjoyable day. 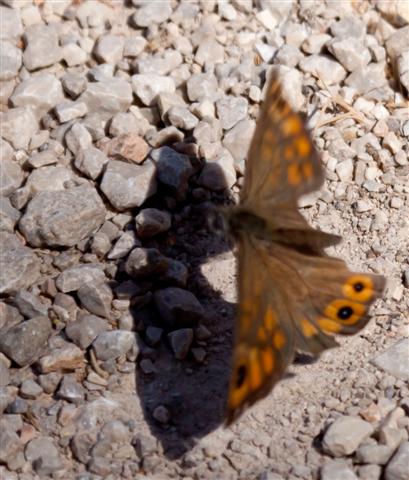 
Check out the accompanying website at http://www.birdingaxarquia.weebly.com for the latest sightings, photographs and additional information.
Posted by Bob Wright - The Axarquia Birder at 03:55