Still just about freezing point when I set off after breakfast to walk along the Warsash shore to the Spit and on down the Solent as far as the Scrape and Meandering Pool.  Well wrapped up and loves on even for taking photos and hands still cold.  With the tide coming in and pushing the waders and geese up towards the footpath good numbers of Brent Geese, over a hundred, accompanied by very many Redshank, Dunlin and Oystercatchers.  No shortage of Ringed Plovers and even a handful of Curlew plus a solitary Turnstone.

Ducks were mainly gathered in the Spit inland with two score of Wigeon and almost a score of Teal. Also, about two dozen Black-headed but I had already recorded both a pair of Great Black-backed and half-dozen Herring Gulls.

Approaching the School of Navigation I stopped as what looked like a female Blackbird flew out of a tree in front and landed on the fence post to the left of the path.  Not a Blackbird but a Song Thrush and remained long enough  to get a photograph.  Also present both Dunnock and Robin.

Once past the Spit, where I had also observed both Black-tailed Godwit and Grey Plover, Nothing to be seen as both the Scrape and Meandering Pool were completely ice-bound.  However, in the meadow just before the Scrape a large white "blob" turned out to be a dead Mute Swan with a trio of Magpies looking at the carrion for an easy meal.  I suspect this is one of the this year's breeding pair on the scrape but this individual has been in it own and not looking that healthy for a few weeks.  Could it be Avian Flu?

Making my way back home by the same route the tide had pushed the water even further up towards the shore and I was bale to add a quartet of Shelduck as well as note the almost 50 Carrion Crow around the edges of he Scrape.  On the cinder-type path  leading towards the School of Navigation a Rock Pipit made an early exit over the sea wall as soon as seen by myself but later on a wandering Magpie to keep me occupied.

Approaching the Strawberry Fields a couple of Dunnock on the path and then small movement in the large, bare trees to my left revealed both Blue and Long-tailed Tits.  In the end, despite the cold, a most rewarding walk and, perhaps, tomorrow a chance to walk the River Hamble where there should be more flowing water to encourage waders and ducks. 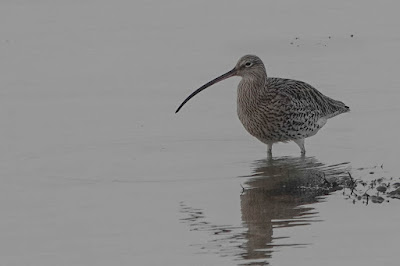 For the latest news follow the Axarquia Birds and Wildlife Facebook page for more photos and comments and the opportunity to share with the wider birding world.
Posted by Bob Wright - The Axarquia Birder at 09:29