Bitterly cold for my early morning start to Pennington Marshes, Lymington.  Arriving at Normandy Lagoon just after 9.30 it was still -7C so plenty of layers on before heading of to check the waters.  Leaving the wooded edges where I had parked the car very many small birds including Chaffinch, Robin, Dunnock and Blackbird along with the occasional Wood Pigeon and a Magpie.  Bit of a surprise to find the large lagoon completely frozen over with all the ducks and waders seeking shelter on the islands and any break that could be found in the ice.  At first glance it seemed mainly Wigeon and Lapwing so use of the telescope to check the mixed flocks.

The Shelduck stood out and then closer inspection also revealed both Teal and Shoveler along with a few Mallard.  Checking the edges I also found both Redshank and Ringed Plover.  Very little point in remaining and as I made my way back to the car a couple of Kingfishers were seen along with both a single Black-headed Gull and an over-flying Carrion Crow.

Ten minutes after departure I found a convenient parking place at the end of Lower Pennington Lane so that I could make a circular walk to take in the Solent shore and the small lagoons on the land side of the coastal embankment before spending more time checking out both Butts and Fishtail Lagoons.

First a walk down the track to check out the nearby (ice free) lagoon at the back of the camp site.  Robins, Chaffinches and Magpies as I md my way down the track and then a mass of Canada Geese on the far bank along with a few feeding Wigeon and a couple of Moorhen.  On the water itself many Tufted Duck, Mallards and Shovelers along with the massed ranks of Coots.  A Cormorant chose that moment to make its departure.

Making my down to the shore to checkout the jetty area I passed both Blackbird and a number of Lapwing feeding on the puddled meadow and then a few Mallard and Wigeon on the water.  All the small ponds on the landside of the embankment were completely frozen so continued westwards to wards the Butts Lagoon.  More Wigeon on the water and a resting Heron at the reeded edge on the far bank.

The next pool with weeded edge held a foraging Robin and Pied Wagtail and was then joined by a Dunnock.  In the bushes below the bank a Blue Tit fluttered in and out of the branches.

Checking the Solent itself a small flock of eight Wigeon and just to their right a single, feeding Slavonian Grebe.  Lovely to watch through the scope and then turning the check the reed fringes of the lagoon itself discovered a Bearded Tit on the ice at the bottom to the reeds.  Most strange.  But then the male, well exposed on top of the reeds busy feeding but very distant so difficult to improve on a simple record shot of the bird.  And if two "specials" at the same time was not enough a Marsh Harrier drifted across the water. 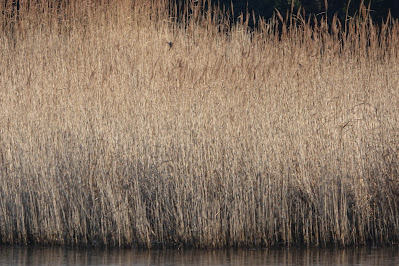 On the other side of the seawall a pair of Turnstone were bust probing the gaps in the brick work in search of food and then a Redshank made a short appearance.  On the opposite side of the inlet in the grassy areas of the Solent a single Curlew and more Mallards along with a single Little Egret.

Approaching Fishtail Lagoon a Meadow Pipit crossed the track in front of me and dropped down into the reeds so revealed a second individual.  But once at the water at last some sign of the ice melting as a few birds were contemplating leaving their island resting sites.  Lots of Mallards and Black-headed Gulls with more Shovelers.  To the far side a couple of Oystercatchers, Ringed Plovers and Redshanks with a small number of Teal out on the water itself.

Time to make my way back to the lane and the car and as I crossed the bushy meadow both Robins and Wren were seen before the arrival of a Song Thrush.  All the lagoons to my left were completely frozen and devoid of birds.  Time to take a final look at the flooded meadow before departure and rewarded not just by the few Lapwing but a small party of Jackdaw feeding at the back.  Watching these birds through the scope and noticing more movement I was delighted to find a handful of feeding Snipe but far too distant and small to capture on camera.

For the latest news follow the Axarquia Birds and Wildlife Facebook page for more photos and comments and the opportunity to share with the wider birding world.
Posted by Bob Wright - The Axarquia Birder at 03:31