Double Titchfield then the Hamble River

A very cold stat to the day as well as being dull and overcast but still at the Meon shore at Titchfield Haven not long after 9.  Wrong timing as the water still at a high level so very little about as I checked first the Solent then the large pool before the river enters the small harbour.  Lots of mallards on the latter and lovely to see many resting Lapwing along with Shoveler and Gadwall on the inland pool.  Closer inspection also produced both Teal and Mallard along with Cormorant and a couple of Coot.

Approaching the bridge a couple of House Sparrows and then a departing Kingfisher.  Across the road sufficient space on the beach to encourage a score or more Turnstone and a Great Tit messing around in the trees outside the Visitors Centre.  Checking the open water I found three Great Crested Grebes along with a few more Black-headed Gulls.  Walking back on the shore path I also found a huddled flock of about 25 Sanderling and a couple of Ringed Plovers.  A handful of Shelduck were on the inland pool and then time to cut my losses and head off homewards.  However, reaching the end of the shore road to turn inland, first a Blackbird just inside the nature reserve and then a Jay crossed the road in front of me.

Knowing I would be almost in Titchfield within ten minutes, I turned right rather than left to pay a short visit to the canal walk.  Parking the car I decided, for the first time, to take the short walk through the small spinney at the back and then pick up my camera for a walk downstream along the canal.  Big mistake.  At the far side of the spinney I watched a Buzzard make a hasty departure as I approached and then, looking through the vegetation at the field beyond with its horse and piles of discarder building material, I caught sight of three feeding Glossy Ibis.  I am assuming that the fourth was out of sight and that these were the same quartet that have been present near the shore between Warsash and Hill Head for over two months.

Making my way along the path I was able to record both Carrion Crow and Magpie as well as a small number of Wood Pigeons before encountering a trio of passing Jackdaw.  Time to check out the flooded area at the back and apart from the many Black-headed Gulls a small flock of Pochard.  Aso present both Mallard and Wigeon along with a few Teal and Shoveler.  The larger pool held a couple of Canada Geese and a handful of Pintail as well as more of those seen on the previous water.  In addition, also a half-dozen Herring Gulls seen.  A Kestrel was busy hovering, looking for breakfast.

Once walking the path through the trees I encountered a Blackbird and a Robin came to say "Hello!" as I reached my turning point.  Making my way back to the car park a Jay in the trees in front of me but upon returning to the back of the spinney no sign of the Glossy Ibis.

Back home and sort out what was needed, have a coffee, etc then backout and across the road to take my usual walk up the Hamble River to the conservation area and back.  Still cold and dull and the tide was about an hour from fully out but, surprisingly, very little bird life about.  A quartet of Black-tailed Godwits and a Redshank on the first mud bank along with a couple of Black-headed Gulls.  A pair of Herring Gulls put in an appearance but very little else as I made my way upstream until at the first inlet I found the resting Wigeon and a the first of five Curlew to be seen during the walk. 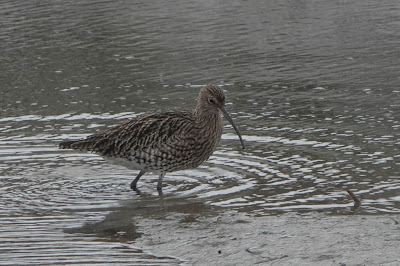 In the stream itself a lovely Greenshank as both Brent Geese and a Little Egret flew over. A very distant Grey Plover was working the water shore and then the next large inlet produced eight Brent Geese and a lone Heron just beyond. A Cormorant was flying upstream.

Once at the conservation area more Wigeon along with just a handful of Teal and a few Redshank.  Making my way back downstream I found a single foraging Turnstone and, in the trees inland a flock of at least 50 Wood Pigeons.  A couple of Magpies, also to my left, and then back at the first inlet a party of about thirty Dunlin had arrived but no Ringed Plovers.

Posted by Bob Wright - The Axarquia Birder at 11:26