Bitterly cold as I cleared the overnight frost of the car before setting off to Farlington Marshes in the hope that I, too, might find both the reported White-fronted Geese and Red Phalarope.  No luck with the latter but I did find the five White-fronted Geese, two adults and three juveniles, immediately next to the the Deeps.  Less than a hundred metres away and and the birds then moved right to join a small group of feeding Canada Geese.  With frost on the ground and an almost atmospheric haze above, it was a truly great , and clear, sighting. In the background many more Canada and Brent Geese along with Lapwing and a single Heron.

The  morning had started well having arrive by 9 o'clock and apart from the ever-present Magpies the fist species was a male Kestrel which seemed stuck to the top of the tree as it refused to move on.  Then on top of the embankment as I walked southwards noting the tide was only four hours on from low water so lots of ducks and waders to be seen.  The scope immediately revealed thousands of Dunlins feeding and moving below me along with a good number of Redshank, Ringed Plover and Lapwing.  Not to be outdone, over a score of Curlew were counted in the next couple of hours along with Oystercatcher, Turnstone and Grey Plover.  Just a couple of Black-tailed Godwit but many more on show during the final part of the walk.  Surprisingly few Black-headed Gulls and no Herring Gull in the first couple of hours.

At first sight, despite the occasional Mallard, it would seem that the most populous duck was the Pintail but then a few Teal and more Teal and Wigeon as I worked my way round to the Deeps.  Also at the latter a number of both Shoveler and Shelduck, many of them on the sea itself having been put up from the sheltering pools by a quartering Marsh Harrier.  The fields beyond seemed to be continually producing Lapwing and even a dozen Starling as a lone Cormorant flew across.

Once round the first main bend of the walk from setting off I started to encounter no end of Stonechats, mainly males.  By the end of the morning the total had reached almost a score.  Only a couple of Meadow Pipits but the the path on the far side produced first a Wren then the first of two Song Thrushes.  The path leading to the former Visitors Centre and the area around produced many Blackbirds plus both Robin and Dunnock.  A Blue Tit fluttered around a large bush and a  Pied Wagtail seemed to be enjoying itself skating on an icy-covered puddle!

This latter area also produced more Moorhen and the first Coots. A number of Black-tailed Godwits were feeding with yet another flock of Brent Geese as were a couple of Little Egrets.  On the river in front of the building a feeding Little Grebe and more Mallard and Teal.

Working my way through the meadow to regain the return track to the car park I picked a single Collared Dove and more Carrion Crows.  No sooner back in the car and under way that I finally recorded a Wood Pigeon to bring the morning's tally up to 42 species. 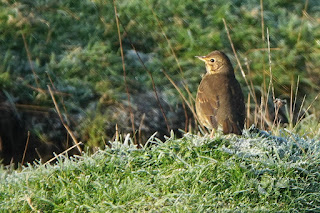 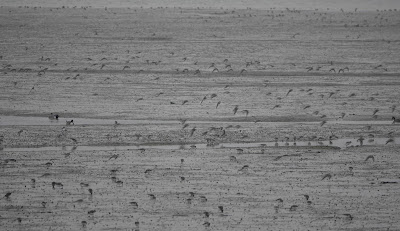 For the latest news follow the Axarquia Birds and Wildlife Facebook page for more photos and comments and the opportunity to share with the wider birding world.
Posted by Bob Wright - The Axarquia Birder at 12:40