A rather overcast and cool morning as we thee headed off along the M27 to spend three hours at Farlington Marshes at the north of Langstone Harbour between Portsmouth and Hayling Island.  Not the warmest of starts upon arriving to coincide with the outgoing tide and over an hour before the sun broke through, but by the time we departed for home just a few broken clouds in the brilliant blue sky and the temperature up into the low twenties.

Setting off in an anti clockwise walk along the harbour wall we were soon seeing numerous Black-headed Gulls and at least five Crows.  A handful of Goldfinch were feeding in the bushes to our left and the the first distant sight of an Oystercatcher at water line.   A couple of Herring Gulls put in an appearance and then a long stop at the extensive reedbed to both check the inlets and river at the back.  Near at hand calling Reed Warblers with a brief sighting and overhead a couple of Common Swift moving with the passing gulls.  To the back a very large flock of feeding and swirling Starlings, well in excess of 200.  On the river itself a Mute Swan with five cygnets along with a score of Canada Geese, a few Coots and the first sight of the Black-tailed Godwit flock, totalling about an hundred.

On the field nearer to us a couple of Magpies plus a Moorhen that wandered off the water and then we picked up out third Little Egret of the morning.  We could also see a sunbathing Cormorant and a dozen Mallard plus a couple of Shelduck.  In the small inlet in front of us we noticed a juvenile Great Crested Grebe but no sign of an adult.


Lots of pleasure as we watched a Meadow Pipit with a beak full of food that refused to leave its bush-top post until it actually appeared on the path in front of us getting closer and closer.  Also in the neighbourhood a rather handsome male Linnet.


With the water rapidly receding to expose the mud flats more and more waders were recorded as they came to feed.  Many, many Redshank but also a few Greenshank and a small party of Dunlin.  Lovely to find a trio of distant Curlew and then, reaching a bramble patch at the far end of the site a lovely Willow Warbler plus a female Blackbird working the field edges.


Continuing on round to the far side more and more Little Egrets, a few more Redshank and at least a score of Oystercatchers.  Not just the occasional Linnet and a passing Pied Wagtail but another Meadow Pipit came to forage on the path in front of us.  Then our attention was drawn to the movement in the bushes on the inland side of the sea wall and eventually patience was rewarded with the sight of a Common Whitethroat.


A small pool on the inland side held a number of nesting platforms, three of which were occupied by Black-headed Gulls and the furthermost two by Common Terns.  On the water itself a pair of moulting Shelduck and three youngsters plus a couple of Dunlin and maybe a score of Black-tailed Godwits plus, of course, yet another Little Egret.  Overhead we had a pair of passing Barn Swallows and, once more, the calling Reed Warblers.


Working our way to the Information Centre at the Barn we had more Wood Pigeons and Linnets plus another Common Swift before the sight of a Chiffchaff in a tall hedge to our right.  Once at the viewpoint overlooking the river we could see  plentiful supply of Mallards, Coot, Little Egret and Canada Goose along with a single Mute Swan.  A couple of Moorhen appeared at the back in front of the reeds where we then duly noted the feeding Little Grebe.  First a Sky Lark and then a handful of Common Swifts were overhead as we took the final part of the circuit back to the car following the river.  Approaching the birds seen from the viewpoint we noted that there was also another small lock of Black-tailed Godwits plus more than a handful of Little Egrets.  However, using the scope to confirm what I thought I had noticed with the bins, I was also able to observe the single Cattle Egret - and in what appeared to be breeding (summer) plumage.  Possibly a special sighting for the site area or even county and what a last bird to see on a most enjoyable morning. 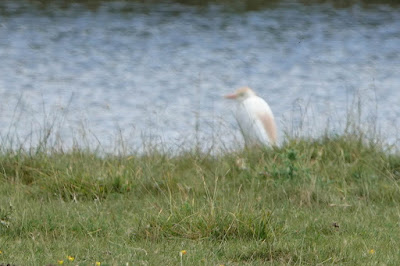 
Check out the accompanying website at http://www.birdingaxarquia.weebly.com for the latest sightings, photographs and additional information
Posted by Bob Wright - The Axarquia Birder at 11:23