Awake early so straight down to the far end of Navaseca and parked outside the road hide by 6.30 just as it was getting light.  Still a number pf Bats flying around (small, so possibly Pipistrelles, Pipistrelle commune) as I approached the water’s edge sheltering behind the teal vegetation.  Calm and the Flamingos just beginning to stretch their necks as the early-arising Coots, Mallards and White-headed Ducks moved about on the water.  The first of the Black-headed Gulls was flying and almost immediately joined by the local Whiskered Terns.

Slightly to my right on the scrape a number of Moorhen were feeding and then I noticed a dozen or more Little Ringed Plover and a single Green Sandpiper.  Behind the scrape on the far side up against the reeds a couple of Black-winged Stilts which led me to recording the trio of Avocet.  In the reeds itself the overnight roosts of both Cattle and Little Egret and even a couple of Grey Heron.  As the Avocets moved away left I picked up a few of the Greylag Geese.  Meanwhile, in front of me, a Little Grebe was feeding and scores of Barn Swallows had risen from their slumbers and were now feeding low over the water.  Not just the Reed Warblers now calling in the reeds immediately to my right but following the warblers bare five metres in front of me I eventually got the scope on it and that explained its behaviour at the top of the reeds as I recorded a Sedge Warbler.

Back to the reeds beyond the scrape to identify the many small birds at the edges, and also now on the scrape itself, as a score or more Iberian (Blue-headed) Yellow Wagtail.  This in turn helped me notice now that I had much better light the dozen or so Night Heron resting in a bare tree at the back of the reeds.  A few more in a tree to their right plus a quintet of Squacco Heron. Back to the shore line and a Common Sandpiper was working the edges.  Distracted by the noise to the far side I found a huge “swarm” of agitated Spotless Starlings and Mallards and realised that their cause for concern was the quartering male Marsh Harrier.

Moving round to the lane at the back of the lake I stopped at the various hides and recorded more White-headed Ducks and Greylag Geese along with yesterday’s Great Crested Grebe and well-grown youngster.  There were still a few Night Herons in the bare trees along with many more of the roosting Barn Swallows.

A Greenfinch was moving about in the tree in front of me and even the House Sparrows had joined in the party.  A couple pf Blackbirds to my right and then you realise just how many Wood Pigeon are in the vicinity.  By now the early Common Swifts had arrived to feed and moving on round to the back to check out the favourable spot from the track I found the sun was in the wrong position to help me but able to confirm the presence of more Little Egrets, Black-winged Stilts and Whiskered Terns.  A large charm of Goldfinch was feasting on the thistles and noting the many Collared Doves in the area a single Hoopoe flew across the track as I made my way back to the hotel to shower, dress and feed before setting off north.  Indeed, my final bird as I left Daimiel was a resting Kestrel on a pylon.

A not uninteresting journey north skirting Madrid on the M50 and passing Guadalajara until my lunch break at Cardejon in the province of Soria in Castile and Leon region.  Within a kilometre of setting off again I came across a pair of Carrion Crow at the edge of a small vineyard and then another three out in the open about thirty minutes later by which time I was in Navarre. Also in the latter I also found a dozen low soaring Griffon Vultures.  By now the temperature had reached the high twenties but far more humid than Andalucia and the wind had picked up even more with some very strong gusts.  But still blue skies!

And so on to the Laguna de Pitillas where I found the water levels down a little but very choppy.  Approaching the site lovely to see the White Storks feeding in the lush green paddy field which seemed to have been recently flooded.  A quick trip along the track at the side of the woods to check out the waters from the far side and picked up both Crested Larks and Sky Lark.  Even at a distance I could see the resident Mute Swans.  Back to park at the (closed) Visitors Centre and take a closer look at the water.  Lots of Reed Warblers and House Sparrows but with the strong wind coming from behind difficult to keep the scope steady and most pf the birds were on the far side.  However, close to and a few Red-crested Pochard a handful of Common Pochard plus a single Tufted Duck.

From this side I could see that there were indeed ten Mute Swans in view and in the distance I also picked out Mallard, Coot and Little Grebe.  Above me mainly many House Martin but also seen were both Barn Swallow and Common Swift. With conditions this bad no point in hanging around, so noting the pair of Linnet I made my way back to the car for the relatively short journey to my overnight stop in the small town of Tafalla.

Having checked in and still plenty of light and heat left in the day, I decided to drive to the cliffs at Extauri, a little west of Pamplona, and about forty minutes using the toll motorway.  A very impressive site and lots of Griffon Vultures and Crag Martins to be seen.  Unable to find any Egyptian Vultures but I did find Alpine Chough and a family of Raven.  The local birds also included Barn Swallow, House Martin, Collared Dove, Blackbird, Spotless Starling and House Sparrows.  So ended my Spanish birding as come the morning I would be in France for a couple of days working my way to Thursday’s ferry from Dieppe back to Newhaven in Blighty.  However, the day produced three new birds for the year in Carrion Crow, Mute Swan and Alpine Chough so smiles on the face as I drive towards some British birding for a few weeks. 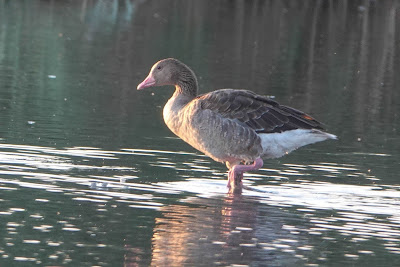 Check out the accompanying website at http://www.birdingaxarquia.weebly.com for the latest sightings, photographs and additional information
Posted by Bob Wright - The Axarquia Birder at 08:34